We may name the package as a stimulus for the poor or reforms for self-reliant India, but the fact is we will have to do more with less and ensure benefits of the package are far reaching. 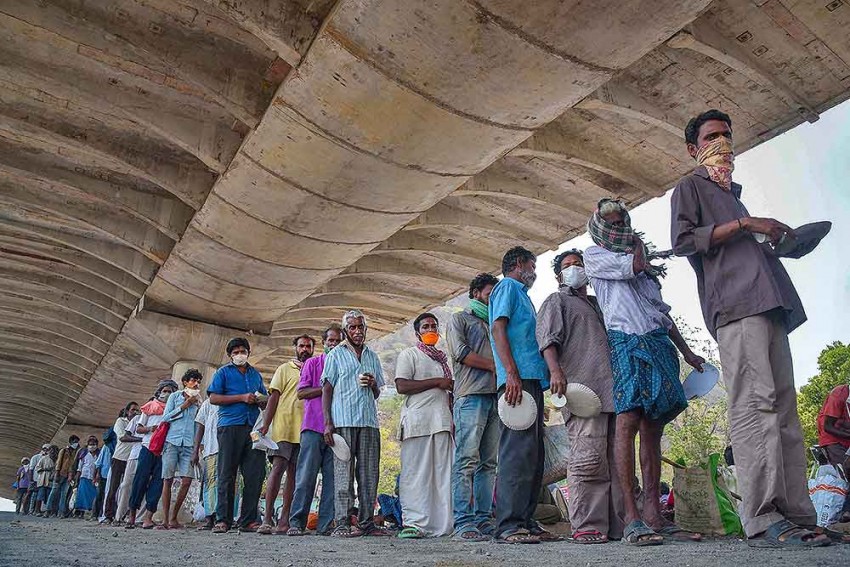 Stranded migrant labourers stand in a queue to receive food from volunteers as they take shelter under a flyover after leaving a quarantine facility, during the fourth phase of COVID-19 lockdown, in Vijayawada.
PTI Photo
Abhimanyu Girotra 2020-05-25T21:10:36+05:30 Robin Hood Approach Required To Effectively Use An Otherwise Dull Economic Package 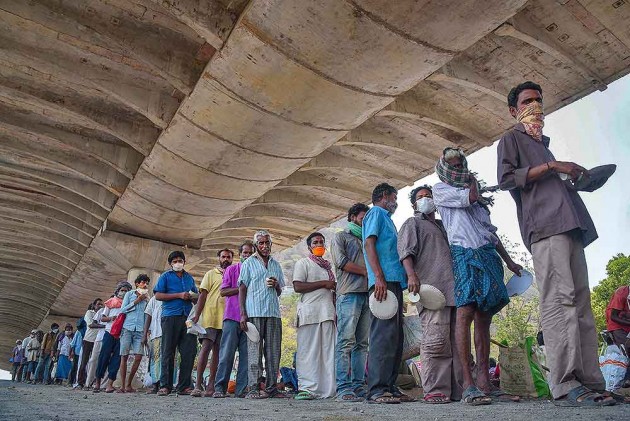 Now that the litany of stimulus package announcements has been released and the dust has settled, there is a unanimous agreement that neither the size nor the design of the package is exciting enough to save India from the current crisis. In my previous article I argued that India needs to do more with less as our fiscal limitations do not allow for an exuberant bailout. And now that it’s time for implementation, it is even more important that we craft an out-of-the box “Robin Hood Effect” approach to dole out benefits to as many as possible.

As a part of the announcement, the MSME sector was offered a Rs 3-lakh-crore collateral free loan. This is a watershed announcement as potentially 45 lakh MSMEs can benefit from this. However, the announcement misses the opportunity to address structural issues related to MSME credit. If anything, the 100 percent sovereign guarantee for non collateralised loans will encourage both banks and borrowers to never return the money and to become defaulters. India has 6.3 crore MSMEs and since the uber intent is to save as many businesses as possible, the government should consider limiting the sovereign guarantee to only 50 per cent and due to inherent risk-reduction should extend the outreach to additional 45 lakh MSMEs. This way, the stimulus coverage for MSMEs increases, money works harder, banks remain moderately cautious while lending and the government, after four years, is not staring at a slew of NPAs. NBFCs, another lifeline for small business have been offered Rs 30,000 crore liquidity and a partial credit guarantee of Rs 45,000 crore. To ensure wider distribution, this additional liquidity should only be reserved for micro units as they employ 85 per cent of the workforce and are the most vulnerable to external vagaries. To ensure deeper penetration amongst micro units, the NBFCs should be mandated to lend to at least 50 per cent of those units which have been kept completely out of the formal lending channels. Some will indeed default, but the approach would reduce the dependence of unbanked units on loan sharks, propel the economy at grass roots level and will enable these businesses to borrow with dignity in the future.

Amidst momentous reforms that were announced for agriculture, farmers were also allocated Rs 30,000 crore working capital and Rs two-lakh-crore concessional credit through Kisan Credit Cards (KCCs). Magnanimous as it may sound, it is unfortunate that only 40 per cent of India’s small and marginal farmers are covered by formal credit and as per Nabard’s own NAFIS survey only 10.5 per cent of agricultural households have a valid KCC. Due to this shortcoming, aid distribution will get throttled and will not reach the poorest of the farmers. To ensure widespread reach and avoid any further distress, the district panchayats should be roped in and made accountable to ensure timely disbursement as panchayat members have written records of the farmers working in respective villages. Joint Liability Groups (JLG) can also come in handy to reach unbanked farmers as they enable small groups of farmers to avail bank loans against mutual guarantee.

Lastly, the migrant labourers: the unnamed, the invisible, the unfortunate victims of covid crisis. The package has generously allocated Rs 40,000 crore for MGNREGA, over and above Rs 61,000 crore already allocated as part of the Union budget. The hope being that the migrant labourer has a source of livelihood as and when he returns to his village. As noble as it may be, but the policy will only stall the recovery of India. One, MGNREGA although assures 100 days of paid work but practically there is not more than 50-60 days of work in a year. Now by inflating the budget by 66%, the migrant workers will become disguised labour as they will be digging trenches and erecting walls which may not be of use. Second, the fate of MSMEs will be further aggravated as doling out incentives to labourers in villages will only delay their return. Instead, the migrant labourers should be incentivised to return to cities by doing a no-question-asked Direct Benefit Transfer from the allocated MGNREGA funds provided they leave villages in a stipulated time. The approach will ensure businesses in cities do not shut their shops due to labour shortage. Words are not enough to describe the plight of migrant labourers but by doing just this much, we can at least get them back to the cities with dignity and just hope that the travesty of social justice enacted this time is never repeated.

Fighting a crisis is a dirty business, more so when you have been dealt a bad hand. We may name the package as a stimulus for the poor or reforms for self-reliant India, but the fact is we will have to do more with less and ensure benefits of the package are far reaching. Robin Hood stole from the rich and gave to the poor, we do not have to steal from anyone but just reallocate whatever little we have so we can survive the crisis and come out resilient.

(The author is a management graduate from IIM-Calcutta and a freelance writer. Views expressed are personal.)