The velvety voice of Talat Mehmood, seductive voice of Ameen Sayani and a table recital can instantly lift one’s mood. Tune in Listening to Sudip Banerjee singing the songs sung by the velvet voiced Talat Mehmood was a bit of an emotional ride. The songs in themselves are mostly layered with melancholy, rich in imagery and set to tunes that flowed like moonlight over water when Talat sang them. As suited the music of the composers who used his tremulous voice to advantage, among them Anil Biswas, Khayyam, SD Burman and Madan Mohan, the orchestration supported the voice, setting it off like a softly gleaming jewel, letting the words slide over the tune and reach the heart. Talat, popularly called the King of Ghazals took the genre in films to its height, and the songs wooed, lamented, or celebrated love in it many moods for heros as diverse as Bharat Bhushan and Dilip Kumar.

Banerjee’s performance at the Jasn-e-Talat show which premiered on the Royal Opera House’s Mumbai Opera Online website this week, was a series of songs excerpted from his performance at the Kala Ghoda festival. It was wonderful to listen to the old numbers, and to his credit, Banerjee tried to make the songs reach out to the younger audiences by bringing in a more contemporary instrumentation, and creating a zany vibe. The tune, the words remained in their appointed places, and for those who had never felt their power there is every chance that the performance may have created a few fans at least for the songs, if not the original numbers.

But I wonder how die-hard Talat fans must have reacted. I am one among them, and I remember still the thrill I felt each time I met the soft spoken singer for interviews.  Frankly, I was unsure of my reactions to the performance. To hear Jalte hain jiske liye from Sujata, not as a song crooned over the telephone by an ardent lover to a very surprised beloved but as a full throated version, was somewhat unnerving. And to convert the already ‘inspired’ Itna na mujhse tu pyar badha into a automated foot-tapper, rendered me speechless.

Where, I wondered was the pathos, the heart wrenching reach of romance that the original songs held, making the three-and-a-half minutes seem like a bubble that enveloped the listener, separating one from the rest of the world. Banerjee was more technique than feeling, a performer who performed from outside the songs. And to draw a line to connect to another singer of ghazals who managed to make it modern and popular enough to almost overshadow Hindi film music, the orchestra ensemble could not manage what Jagjit Singh could do, in the way he let instrument and voice walk in perfect sync.

Yet, credit is due, for an attempt to revive songs that still retain their freshness and ability to touch the heart; but are seldom heard as fm stations dare not venture into the past beyond the 1980s in their bid to hold listeners. It’s only on Vividh Bharti that one gets to hear Talat originals on and off. And of course on SaReGaMaPa’s Caravaan, or one of the music streaming sites

Readers may do well to check out the songs. And let Talat cast his spell. They will be surprised at how powerful it can be.

Another golden voice from the golden era

Old-timers will love this nostalgia-filled ride. 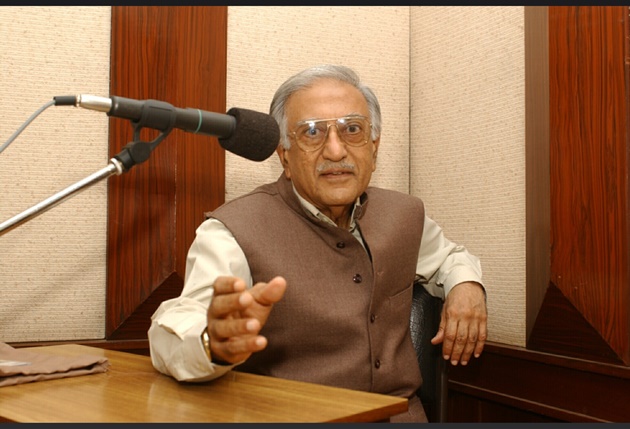 Announcer and radio personality Ameen Sayani combined interviews, research and music with a seductive voice quality to woo generations of radio listeners as he announced the top songs of the week on Radio Ceylon’s Binaca Geet Mala. The magic of his voice, the clarity of his enunciation and the dexterity with which he used words to create a personal link with every single person tuned in to the programme made him one of the most imitated, most valued of radio announcers. He did also have a parallel career as a publicist for films and music, but it is as a radio voice that Sayani has always been loved. There have been some radio stations that have mined his memories and the vast repertoire of interviews with film personalities, and singers, music directors and lyricists that he owns, and thus despite the fact that the Geet Mala programmes ended decades ago, Sayani continues to garner new fans and regale old ones. The Geetmala ke chaoon mein series of cds, now converted into a segment on Caravaan is one treasure throve of stories and songs through the decades of the golden era of Hindi film music.

But now, on fb.watch, fans can listen to the golden voiced announcer regale them with stories from his own life, in an interview format programme titled Mujhe Yaad hai  Sabh Zara Zara  that was first recorded in 2007. It’s a trip through not just the history of India, but through the unfurling flow of matchless singers and music. He tucks in his nuggets of humour, like when he says that Pankaj Mullik sang even romantic songs in a marching mode, and as boys, he and his friends would march to Mallik’s Piya Milan ko Jaana. He talks about why KL Saigal was the adored singer he was in his time and why he is considered an all-time great, and in the process you can hear long forgotten songs by Saigal, actor Ashok Kumar, the less musically celebrated brother of Kishore Kumar, and others.

Plenty of history, music and all in the inimitable voice. Do tune in, for a ramble down memory lane. Here’s the link: https://fb.watch/2gszOCP-nt/

And a bit of the classical

A quick word on a solo tabla on-line performance by Saattvic, who describes himself as an economic consultant with his own practice specialising in antitrust, policy and regulation. He holds an MPhil in economics from Oxford. Though he is pursuing a PhD at the university of British Columbia, he recently held a short online performance with a digital sarangi accompanying him, under the aegis of Rhythmic Kashi. Trained in the Benaras gharana by Pt. Ashok Moitro, Saattvic launched his performance with a brief description of what he would be playing and what each segment consisted of. It was a happy way of involving the audience and getting them to move their appreciation of rhythms up by a notch towards understanding the intricacies of classical taals. The playing was deft and competent, and I cannot comment further as I have never learnt to play the tabla. But Aneesh Pradhan, whom I asked for a opinion, did say saattvik “showed promise and has trained well in the Benaras gharana”.