Home  »  Website  »  National  » Opinion  »  Luck Has Favoured PM Modi So Far In His Covid-19 Battle. But How Long Will His Luck Hold?
Cabbages & Kings

Luck Has Favoured PM Modi So Far In His Covid-19 Battle. But How Long Will His Luck Hold?

The impact of the novel coronavirus pandemic and the pressures it has given rise to is far less on Prime Minister Narendra Modi than most of the global leaders. 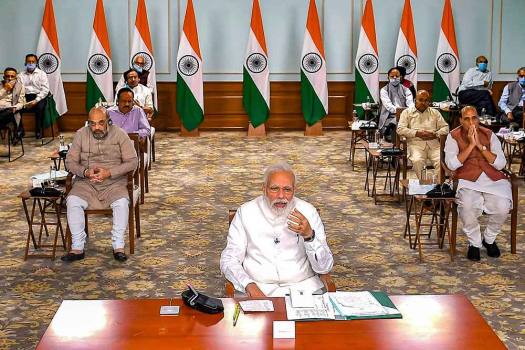 Prime Minister Narendra Modi interacts with floor leaders of the opposition and other parties in Parliament, to discuss on COVID-19 pandemic and the government's efforts to contain it
PTI Photo
Shastri Ramachandaran 2020-04-16T12:25:24+05:30 Luck Has Favoured PM Modi So Far In His Covid-19 Battle. But How Long Will His Luck Hold?

Consider the situation facing government leaders in a score of major countries from China, Japan and South Korea through West Asia and Europe to the UK and the US. Prime Minister Narendra Modi is, perhaps, the luckiest of them all. Relatively speaking, the impact of the novel coronavirus pandemic and the pressures it has given rise to is far less on Modi than most of them.

Modi finding himself in less of a tight spot compared to leaders of other major nation is more the result of fortuitous circumstances than the outcome of any strategy or methodical planning for the consequences of the pandemic. For reasons which are too complex to be dealt with here, the course of the epidemic and its impact in India, and South Asia, has been far less malign than it was feared.

Also Read |  Applause For India's Spirit, But No Relief For Poor: Hits And Misses In PM Modi's COVID-19 Address

That made it Advantage Modi not only for dealing with global leaders, such as Chinese President Xi Jinping and US President Donald Trump, but also in pulling off the world’s tightest and yet most successful lockdown to contain the virus. Keeping a billion-plus people under lockdown for 21 days and confident of riding it out for another 19 days is no mean accomplishment.

It takes more than luck and political pluck to have managed thus far without major civil unrest especially when the state abandoned a few hundred million to their fate of surviving the lockdown without a job, income, shelter, food, family or any sort of social and emotional sustenance. Support from the Union Government was nil. Yet Modi’s image and standing were not dented.

Hundreds of thousands of migrant labourers from mostly Uttar Pradesh, Bihar and Bengal but also Odisha, Telangana and Tamil Nadu on whom the boom was lowered – by the Centre as well as their employers – had no place to go. Jobless, homeless and facing hunger, hundreds trudged long distances home, braving police beatings and cruelties; some died on the way; and, tens of thousands, who couldn’t get away, were corralled in shelters with poor amenities and worse hygiene by state governments which had perforce to act – to ward of unrest and the epidemic from spreading.

Also Read | India Needs A Sound Post-lockdown Strategy To Deal With Its After Effects. Here's What We Can Do

It was Modi’s luck that the meek inherited only newspaper headlines, which could be ignored. Their desperation spelt no danger to his political primacy. Yet he did not push his luck further: when he extended the lockdown on April 14, the Prime Minister stressed that the decision was what state chief ministers wanted. Modi is not one who lets others take credit for his decisions. Perhaps, he sensed that the lockdown was unpopular, causing unrest and that he couldn’t carry it on the force of his own personality alone.

Modi is even luckier when it comes to the middle class. It is kept in good humour with entertainment choices like Ramayana and made to feel useful in the fight against the virus -- with the tasks like beating pots and pans, lighting lamps and flashing mobile torchlights. The middle class invests such symbolic actions with deep religious meaning that reinforces their faith in God and government  -- and in themselves -- as people who are doing all they can to battle the coronavirus. The ambitious ones also get a shot at vigilantism by way of enforcing the lockdown in their neighbourhood.

Where Modi is luckiest is that his government has not had to do anything especially involving huge spending on the healthcare or the economic front. It is the state governments that are in the forefront of the battle against COVID-19. During his periodic media appearances, the Prime Minister is not even expected to spell out the steps being taken for sustaining the livelihood of the majority or reviving an economy in deep freeze. There are a hundred burning questions, such as, about: migrants going home; their need for food, essentials and shelter; rations for their families and life after lockdown; checking police violence; stocks of medicines, testing kits, protective gear, ventilators and critical medical supplies; the safety of doctors and healthcare workers; grants, loans and money payable to states; and, plans for the economy including income and food support for the weakest and vulnerable.

However, the Prime Minister is extraordinarily lucky as none of these questions is being raised in ways to discomfit him. There is no effective opposition. The virus-stricken media is beyond a ventilator. The poor are quiet, silenced by despair, the terror of the future and hunger. The balcony classes are solidly behind him. So is business and industry, pleased with its contributions to PM CARES – which they would have done honourably if they can, dishonourably if they must. The economy, politics and our vibrant civil society, all are in a deep freeze.

Yet for his decision to extend the lockdown, Modi chose to share the credit with the chief ministers. Why? Perhaps, he is wary of the road ahead and what lies in store. May 3 may or may not bring the answers.