A crucial aspect of the government’s 'Open-I' strategy is to open activities and movement in places other than the Covid hotspots. A differential strategy of this nature can only be successful with complete support from the communities. 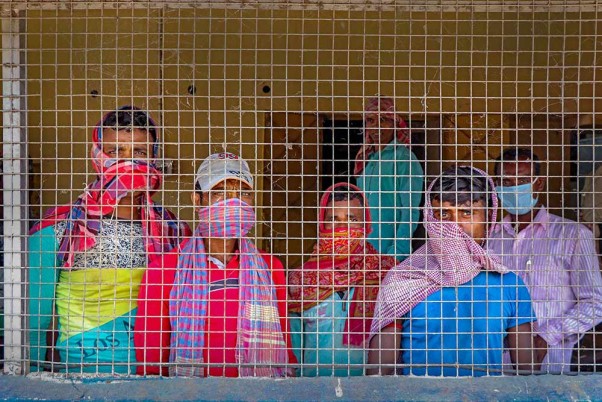 Labourers look outside from a window while working in a rice mill to supple rice sacks to West Bengal government during lockdown in the wake of coronavirus pandemic
PTI Photo
Indranil De, Sanjib Pohit 2020-07-22T18:28:37+05:30 India’s ‘Unlock’ Strategy Should Focus On Developing Trust Between Citizens And Administration

As India opens its economy in a staggered manner, there are many challenges staring at it. The lockdown has had a huge impact on the livelihood of people, especially workers in the informal sector as a day of no work means no wages earned. These contract workers, in the absence of any work and a permanent job, either did not get paid or suffered wage cuts during lockdown. The organised sector has also borne the impact of the lockdown due to its reliance on contract workers. Results from the NCAER’s Delhi NCR Coronavirus Telephone Surveys (DCVTS) show that over a third (38 per cent) of the salaried workers either did not receive any salary, received partial salary, or lost their job during this period.

Government norms for industries and private offices suggest 33 per cent workforce to maintain social distancing. This may be possible to implement in an office set up, but a profit-making firm or industrial unit would find it challenging. In the manufacturing sector, each worker at conveyor belts and assembly lines has a dedicated role to play at each stage of production. In such a setup, a unit cannot operate with 33 percent staff as it will disrupt the entire chain on the assembly line. To abide by the rules, the firms have reduced the speed of their assembly line so that fewer workers can complete the assigned tasks. In the process, efficiency of the firms’ operations in the organised sector, notably the automobile, spare parts and machinery manufacturing has decreased, thereby reducing the competitiveness of Indian’s industry vis-à-vis the world. The government should provide leverage to the industries to set their own norms. By and large, most of the workers are provided with face shields and other protective gear in the organised sector. They may even be allowed to function with full staff strength in selected cases.

In general, the government has advised all offices to function without a cafeteria to minimise social gathering or have staggered lunch hours. However, operation of a canteen is must under the Indian Factory Act. It is also not possible to have staggered lunch hours if the assembly line of production is in operation. Thus, there must be a fixed lunch hour for all workers when the  assembly line is stopped, which can be a challenge for plants with a large workforce. There may be a need to amend the Factory Act during the pandemic or alternatively provide packed food or reduce the duration of shifts to avoid lunch breaks.

A crucial aspect of the government’s Open-I strategy is to open activities and movement in places other than the hotspots. A differential strategy of this nature can only be successful with complete support from the communities. Unless people resolve to stay indoors and home quarantine themselves upon testing positive, or exposure to an infected person, the desired results of a lockdown will never be achieved. People generally are reluctant to sacrifice, give up their freedom to movement, follow instructions, adjust, face discomfort and bear the social cost of restraint. They always expect others and more so the government to step up and get things organised.

To ensure community support, mass media and IT are a must. Local administration and NGOs are essential towards achieving this end. Kerala, by virtue of deploying successful strategies, stands out as an example. Capitalising on its strong structure of decentralised governance, Kerala contained the spread of infection at the beginning by sensitising and educating people about coronavirus and motivating them to follow norms. Neighbourhood groups formed for thrift and credit under Kudumbashree programme created 1.9 lakh WhatsApp groups with 22 lakh members that played a vital role in dissemination of information and developing trust between citizens and government. Kerala had the added advantage of having made significant investment, unlike other states, in public healthcare infrastructure and existing levels of awareness.

Another successful model that deserves attention and could be a learning for other states is Bhilwara in Rajasthan. The city followed six essential steps: a) isolating the district, b) mapping the hotspots; c) door-to-door screening; d) aggressive contact tracing, e) gearing up quarantine and isolation wards and f) developing rural monitoring mechanisms. The local administration reached out to people and sensitised them towards the importance and need to stay in, and personally followed up on those with influenza-like symptoms. They also invested heavily on developing community trust by initiating door-to-door supply of essential groceries, fruits, vegetables and milk. The poor and needy were provided cooked food along with packets of grains and pulses. As a result, people preferred staying in. All of this was possible because of the trust developed between the people and the local authorities.

Both these models point at one thing—a greater role of local governance, panchayats in rural areas and municipal corporations in towns and cities. These local institutions should focus on redesigning norms according to the local context, with the primary focus on developing trust between the citizens and the administration making the fight against coronavirus a united effort.