India’s Migrant Workers Crisis Not Just About Economic Inequality, But Social Too

The vital reason behind the plight of the migrant workers is deeply entrenched in the structure of India’s economic system itself. 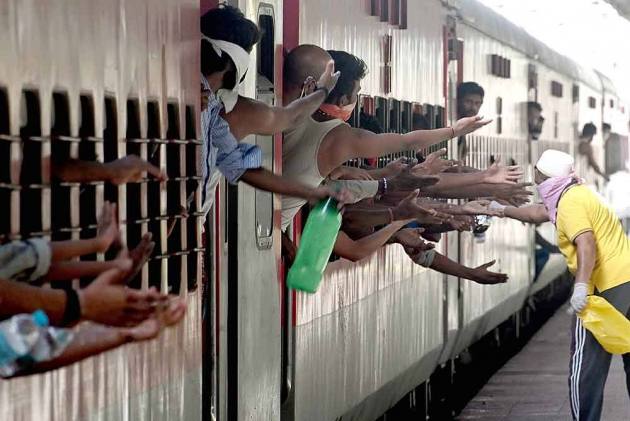 One of the conspicuous illustrations of economic inequality in post-independent India is the contrasting images of Antilia, India’s billionaire Mukesh Ambani’s luxurious 27-floor residential property, and the surrounding urban slums located within his wealthy neighbourhood. The enduring economic disparities have surfaced once again under the public gaze during the nationwide lockdown in India following the global pandemic. The economic divide was discernible in the images of India’s rich and middle class clapping hands on the terraces and balconies of their homes and the gloomy images of millions of poor walking on the roads with their kids, bereft of food, water and public transport, to reach home. When this defining image of India has shaken the public conscience, the political apathy and the governmental inefficiency to tackle the migrant issues have become the banality in the discussions and debates around the issue.

The perennial problems of migrant workers entail lack of proper accommodation, low standard of living, low wages, inaccessibility to state given services due to lack of identity proof and other documents. The global pandemic has become the immediate reason for the abrupt palpability of the migrant workers’ deplorable condition on the national scene. However, the vital reason behind their plight is deeply entrenched in the structure of India’s economic system itself. Their precarious condition is the culmination of a prolonged existence of the capitalist mode of production coterminous with the neo-liberal policies.

Neo-liberal measures seek economic growth by promoting consumerism and competition. By limiting the intervention of the government, it debilitates the mechanisms and mediums of economic and social justice. The deregulation of social welfare policies further deprives the marginalised of their economic and social capital. It may be argued that the present-day migrant problem in India is the repercussion of neo-liberal economic reforms implemented in 1991 by then Finance Minister Manmohan Singh and pursued by the successive governments under P V Narasimha Rao, Atal Bihari Vajpayee, Manmohan Singh, and now the present Prime Minister Narendra Modi.

The camaraderie between the corporate and the government machinery is still on and continues unabated. The disproportionate share of benefits at the expense of the poor and the absence of government intervention in the welfare realm left the needy more vulnerable. A structural paradigm shift of mutating the Indian state into a more welfare state and a fair redistribution of public goods under state control are inevitable to tackle the increasing disparities between the poor workers and the rich.

However, the reductionist approach to comprehend the migrant problem in a single framework of economic disparity will lead to a myopic understanding of the larger issues involved. India’s migrant problem is not just a mere class problem. Dr. B R Ambedkar, in his 'Annihilation of Caste', indicated the interplay between caste and class in India and stated that “caste system is not merely a division of labour. It is also a division of labourers”. Migrant worker problem, especially in the context of India, thus entails the issues of social injustice and moral apathy of the individuals towards the downtrodden which unfortunately never themed in the mainstream discussions.

The social aspect of the migrant workers pinpoints the fact that most of them belong to the marginalised communities such as dalits, tribals, and minorities. Their plight is not only the reverberation of the neoliberal nature of the state but also the prolonged historical social oppression and exploitation by those at the top of the social ladder. The social abhorrence against the affirmative policies such as reservation and the hegemonic attitude of the social elite hindered the upward mobility of the migrant workers belonging to a particular caste and community. As a result of these external inhibitions, the young generations of these migrant workers are systematically alienated from their capabilities and creative skills and pushed into the margin for the rest of their life. Thus, the interplay between social and economic alienation expounds the issues of migrant workers in India.

The question of social goods such as self-respect and dignity shall be reckoned with to understand the migrant problem in its fuller extent. While the announcements of government’s relief package remained hyperbolic, the temporary help and relief of civil society organisations and charity of some individuals, though appreciable, rather debilitated the dignity and self-respect of these migrant workers. The discriminatory and prejudiced attitude of people towards migrant workers is also a compelling problem. The poor workers are often treated with humiliation that is deeply entrenched in India’shierarchical social system. The Brahmanical social attitude encrypted in the Indian minds often reflected in their treatment of migrant workers’ body as the ‘other’ and the ‘polluted’ in the public domain. The incident of spraying of disinfectant on migrant workers in UP and other places is coterminous with this common perception that the poor migrant workers’ body as unclean and impure. The indifference towards them in the public domain is a common sight, especially in the urban spaces of metropolitan cities. Their presence in public spaces such as metros, buses, hospitals, shops often viewed as unclean and polluted by the self-claimed ‘pure’ bodies. The Humiliation and disrespect unleashed on their bodies under the cognitive influences of purity-pollution binaries often decimate their self-respect and self-dignity.

The migrant conundrum is thus a culmination of prolonged structural denial of basic economic rights by neo-liberal state machinery in concurrent with the social and moral apathy towards the marginalised sections who constitute the majority of the migrant workers in India. They are dispossessed by both the state and society. The mere transportation facilities to their homes or mere labour reforms are not an all-time panacea for their problems. The change in the discriminatory social behaviour and public attitude towards workers, the inclusion of affirmative policies and a transformation in the nature of state from a neoliberal establishment to a more welfare entity can advance an egalitarian social and economic realm in which rights, dignity and respect of the workers from socially marginalised sections are assured and protected.