From NEET-JEE To Congress Leadership: Covid-19 Refuses To Leave, But Politics Goes On

Narendra Modi is still at the top of the political heap, playing with peacocks seemingly without a care in the world. And why shouldn’t he since the main opposition party, is busy opposing itself rather than the ruling BJP and its allies? 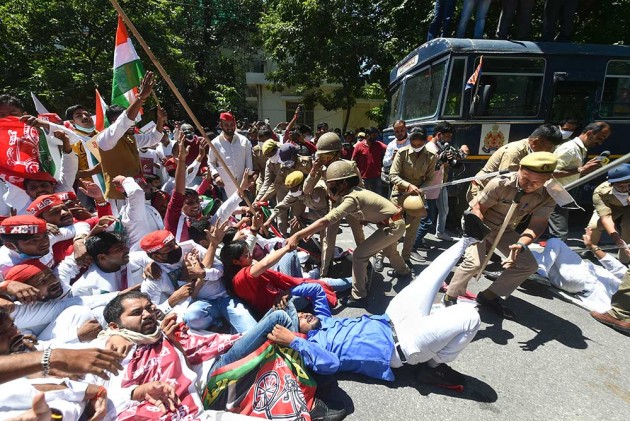 As the month of August has drawn to a close, nearly six months after the WHO declared it a pandemic, Covid-19 refuses to go away, despite minister Ramdas Athawale’s plaintive pleas for it to do so.

And a few stray thoughts and observations come to mind. Like the honourable judges of the Supreme Court are very concerned about people running around hurling contemptuous and gratuitous remarks about them and their institution. Justice must prevail and the rule of law must be upheld no matter what the cost. And therefore, the learned judges are perfectly correct in insisting that students must appear physically for their exams before being given their degrees, that is, if they pass the exams. With Covid-19 raging around, it’s possible the students will pass out rather than pass, something our judges are well aware of since they came to their decision in a virtual court in splendid isolation, unlike the students whose numbers in non-virtual exam centres will be virtually in thousands if not lakhs. As the Queen of Hearts said in Alice in Wonderland: “Sentence first, verdict afterwards.”

And one question, quite important: What happens to them as and when and if they do pass? At last count, the Centre for Monitoring the Indian Economy estimated that 18.9 million white-collar jobs had been lost between April and July 2020. Perhaps they could consider selling pakodas outside television studios as Narendra Modi had once famously said but with a pandemic raging it’s unlikely they’ll make much of a living if at all.

And one thing’s pretty clear, Narendra Modi is still at the top of the political heap, playing with peacocks seemingly without a care in the world. And why shouldn’t he since the main opposition party, is busy opposing itself rather than the ruling BJP and its allies?

Strange goings-on: 23 Congress leaders sign a letter calling for “sweeping changes” in the party and as it gets media attention, the next day it is followed by a seven-hour-long meeting of the party’s highest body, the Congress Working Committee and then sit as quiet as church mice refusing to bell the cat to mix metaphors.

Sonia Gandhi’s first response was an offer to step down as acting president of the party, asking no one, in particular, to “find another party chief.” Predictably this led to a closing of ranks with the reformists being described as BJP agents. At the end of it all, they all rose up and “expressed faith” in the present party leadership, meaning the Gandhi family. So who or what exactly was the target of the “sweeping changes?” The office and cleaning staff at 24 Akbar Road?

To paraphrase the great and late Ajit, “Loin” of Bollywood, the Gandhi family is like liquid oxygen, they will not let the party grow nor will they let it die, they cannot any longer be counted on to win elections but they apply band-aid effectively, though temporarily, when a Pilot takes on a Gehlot in Rajasthan.

Sonia Gandhi has since made changes of her own in the party leadership in Parliament, adding a few names to the existing line-up. She has given a clarion call to the nation asking for an end to growing dictatorial tendencies (Tanashahi) and a strong defence of democracy (Lokshahi). And just one observation here would be apt. Trite but right: Clarity begins at home!

And another observation: it seems that Piyush Goyal, Minister for Railways, Commerce and Industry has been having a few stray thoughts of his own in fact some might even consider them to be wild thoughts often politely described as “out of the box.” Faced with an economy whose growth could go as far down as Minus 10%, Goyal’s come up with the bright thought that the Kolhapuri chappal can be India’s redemption and earn as much as Rs 7,500 crores in exports. Adding further to his bright idea Goyal says 5-star hotels can be persuaded to keep chappal samples in the guest room cupboards and those wanting to buy them, may do so from the hotel.

A truly brilliant idea but for a few facts: many guests tend to swipe whatever’s available in their hotel rooms from soap and shampoos bottles to towels and bathrobes. The chappals will become another addition to the swipe list, no matter the size. Next, comes the question of who exactly is staying in hotels (5-star or otherwise) these days barring quarantined Covid patients? And finally, the Kolhapuri chappal is largely made using bullock and buffalo leather as is indeed the products of the entire footwear and leather industry not to speak of meat exports. A legion of god-fearing “gau bhakts” (cow loyalists) have boiled out onto the streets in recent times bearing numerous implements of destruction, belabouring all and sundry even remotely connected to leather or meat. They’ve left no one or nothing to chance since they cannot tell the difference between a pork chop and a leg of mutton leave alone buffalo and bullock hide and meat. All of them seem to believe they have the gods and often the police on their side.

Meanwhile, Finance Minister Durbala Bhootharaman (she being a weak shadow of her original self) seems headed in the other direction, concluding that all her problems lie at the door of God. The economic collapse, according to her is an “act of God” although she failed to specify which God. Since the Ram Temple is on its way it’s obvious that one of the others is miffed. Could it be Lord Shiva himself opening his Third Eye in rage at being ignored? In the circumstances it would be appropriate both in terms of divinity and gender that Sitharaman turns to Goddess Durga. After all Goddess Durga has all the Gods on her side and more importantly wields each of their special weapons.

And talk of weapons, a stray comes to mind on the recently inducted Rafale jets into the Indian Air Force and stories both fact and fiction about the boys and girls in blue. One film, “Kargil Girl” based on the life of an air force pilot, Gunjan Saxena played by Jahnvi Kapoor seems to have run into some trouble, not the least because of Bollywood’s propensity to ensure that its heroines keep changing costumes. However, there’s another one in the offing starring Kangana Ranaut, who is likely to outdo Tom Cruise in Top Gun even though Cruise did not come to the job through nepotism. But the surprise package could well be Defence Minister Rajnath Singh who has suddenly begun sporting “aviator” dark glasses. Singh scared the heck out of the Chinese when taking over the first Rafale in a ceremony that involved it running over a lemon in France, thereby proving that India was not buying a “lemon” from a used car salesman in Poughkeepsie USA. It’s unclear what role Singh might play. That will depend upon Narendra Modi who himself was last seen wearing a camouflage jacket and sporting the ubiquitous dark glasses looking pretty much like a Field Marshal.

(Badshah Sen in a journalist. Views expressed are personal.)