COVID-19 Pandemic In India: To Measure or Mis-Measure?

If the official data is taken at its face value, the pandemic seems an insignificant storm in a teacup and the huge social and economic costs seem vastly disproportionate to the problem it is meant to address. 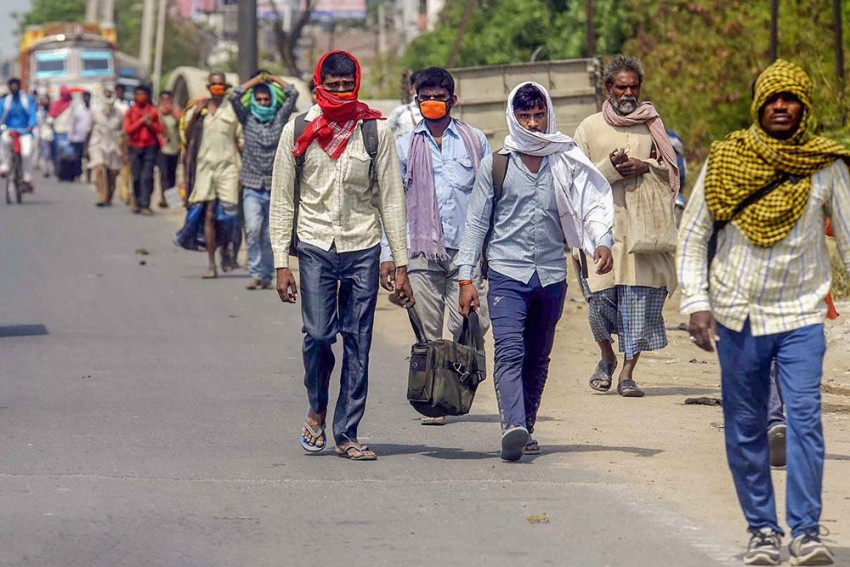 Migrant workers from Prayagraj on their way to reach their native places at NH-31 during a nationwide lockdown to curb the spread of coronavirus, in Patna.
PTI Photo
C. P. Geevan 2020-04-24T18:54:45+05:30 COVID-19 Pandemic In India: To Measure or Mis-Measure? 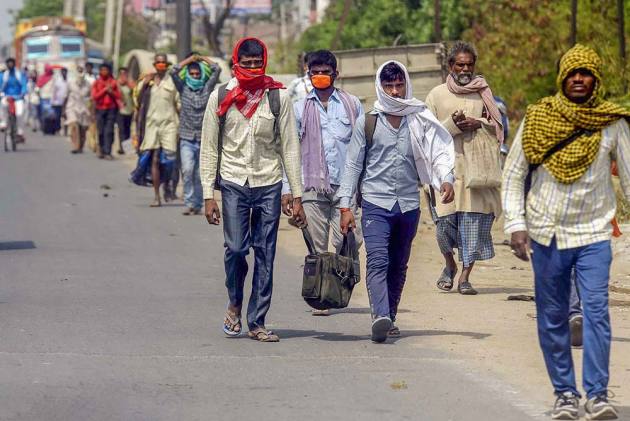 On April 21, 2020, India’s COVID-19 cases leaped to 18,860 and death toll crossed 600, as per official data. Nevertheless, the health ministry maintained that there is no evidence of community transmission. It is finding solace in comparing the doubling period of 7.5 days on April 20, with that prior to the lockdown, 3.4 days. Before the nationwide lockdown, there were 571 confirmed cases, almost all travel related. It is not too meaningful to compare the current rate to that prior to March 25. As India approaches the end of lockdown by May 3, it is pertinent to ask where India is on the epidemiological trajectory. Unless the government ramps up testing, it will be difficult to say if the peak has been reached.

It is important for India to significantly scale up the testing effort (tests per million). India’s current effort, 291 tests per million population, compares poorly with 20,630 of Germany or 23,120 of Italy (Table-1). Both -- the extremely poor testing effort and the approach adopted -- seem inadequate to infer the extent of the spread of coronavirus. India finds itself in a paradoxical situation. If the official data is taken at its face value, the pandemic seems an insignificant storm in a teacup and the huge social and economic costs seem vastly disproportionate to the problem it is meant to address. January 30, 2020, the date on which WHO declared the outbreak as a Public Health Emergency of International Concern, can be taken as the common reference date for all countries other than China. If we consider the COVID-19 deaths per million population, India’s 0.4 deaths are much less than 455 for Spain and 399 for Italy.

India’s incredibly low numbers and the drastic actions of the government could mean that there is an informal recognition of an underlying reality, vastly different from that revealed in official statistics. So far, there is no credible direct or indirect evidence to support the hypothesis of a unique pandemic trajectory for India. There cannot be any scientific basis for the extremely low number of reported COVID-19 deaths, when casualties per million for other countries are between 300 to 1,100 times that of India. Not even a miracle can explain such a deviation.

India’s pandemic management policies seem informed, to an extent, by the recognition of infirmities inherent in her epidemiological monitoring. Shadows of distrust in the official statistics and its ramifications seem to be lurking behind the decision-making. Perhaps, that combined with the dire warnings from many quarters must be prompting the government to adopt some of the options used in other geographies, albeit without the same extent of planning and thinking necessary to make them effective. With this approach, decision-making becomes one of taking risky calls, drilling down into a deeply flawed data, making it equivalent to a gamble overlooking the multi-dimensional crisis. When there is too much opacity and mis-measure becomes the norm, it leads to a pernicious situation where the government thinks it alone knows what the situation is, leaving little space for open discussions grounded on credible data in the public domain.

Official data cannot provide sound rationale for the drastic measures adopted by India. That being the case, it is necessary to examine scenarios that could justify India’s use of the approaches adopted by severely affected countries. Are there ways to go beyond the inexplicably low official epidemiological metrics? It will be useful to look at some of the pertinent data.

The mortality rates (deaths per thousand population per year) for India, Spain and the USA are 7.3, 9.1 and 8.8 respectively. In absolute terms, this works out to be on an average, about 27,580, 1,170 and 7,965 deaths per day. While the COVID-19 deaths reported in other countries are alarmingly higher than the corresponding average deaths per day, the India’s total COVID-19 deaths, in the 80 days from January 30, are nearly 600. That seems insignificant to the estimated total deaths from other causes during such a period. COVID-19 appears to have practically no impact. Obviously, the approach adopted by India, incurring unprecedented social and economic losses, seems to be based on a contrarian view.

Considering that India has 736 districts and 5,572 blocks (talukas), the annual death rate of 7.3 per thousand, on an average, translates to 37 deaths per district everyday or 5 per block. For India, a thousand additional deaths in a day, at the country-level, translate to less than two additional deaths per district, which would be hardly noticeable. An uptick in deaths will standout only when there are several in a cluster.

On April 19, as per data compiled by volunteers from official sources, there were 17,304 total confirmed cases, reported from 410 districts (average 35 cases per district). Deaths (408) were reported from 90 districts (average 4.5 deaths per district). By April 19, COVID-19 had spread to 56 per cent of the districts. Number of blocks in the same ratio is nearly 3,100, although the official tracking of the epidemic seems not to reflect that. Seen differently, the dispersal across the country happened in less than four weeks from March 25. Until then, almost all cases were travel-related, and the spread was extremely low in official data. The rapid spread is not unlike that in other countries. Therefore, it is only fair to assume that if the testing is scaled up significantly, the picture is going to be vastly different from the current official metrics.

Truly granular testing data is not available in the Indian official statistics. It is important to note that while more tests are reported, at present, it is difficult to disaggregate the data. For example, different types of testing are employed. There is testing by ICMR in its sentinel surveillance to detect community transmission. There are repeated tests on individuals in quarantine, self-isolation and under observation. There are multiple tests on patients. And there are new tests on suspected or symptomatic cases. From what little can be inferred, the testing effort seem skewed, without adequate representation of the underprivileged, the poor - rural or urban.

Initially, the testing rate for COVID-19 was quite low in many countries. Several research papers and analytical writings have tried to estimate the scale of the spread from what appeared to be massively under-reported official data. On February 24, Zunyou Wu and Jennifer McGoogan published a research paper examining the COVID-19 outbreak in China, reviewing the report of 72,314 cases released on February 11 by the Chinese Center for Disease Control and Prevention (C-CDC). This paper, which attracted 1.6 million views, with its iconic infographics, made an unprecedented influence on the global response to the pandemic.

According to C-CDC, the overall case-fatality rate (CFR) was 2.3 percent and fatality for critical cases was 50 per cent. While the overall CFR varies considerably across countries, for India it is currently 3.3% (official). The paper notes that COVID-19 rapidly spread from Wuhan to the rest of China in just 30 days. Based on the insights gained from this paper, on March 10, Tomas Puyeo published an incisive blog—Coronavirus: Why You Must Act Now. It argued for urgent lockdowns and strict physical distancing norms. This paper received over 40 million views in a single week, saw 41 translations and influenced policymakers across nations.

Central to Tomas Puyeo’s arguments were the estimates he made of the true extent of the disease spread by working backwards using official (under-reported) data and the known metrics of the epidemic. The logic he employs is relevant to India. He notes that when a case is officially diagnosed, it is not clear when the patient became infected, which must be many days earlier. He reasons that by the time the diagnosed cases touched hundred in Wuhan on January 21, the actual number of infected could have been 1,500 and growing exponentially. Wuhan was locked down on January 23 and another 15 cities the next day.

The medically certified COVID-19 deaths are reliable indicators of the disease spread. It is possible to get a credible idea of the number of true current cases from the confirmed deaths. On average, death occurs about 17.3 days after getting infected. Based on the exponential spread and CFR, Puyeo argues that when all cases are not being diagnosed, when one death occurs, that represents 800 true cases on that day. He also employed another method to estimate likely true spread by comparing estimated community spread against known travel spread. Using the two methods, he estimated that when France had 1,400 reported cases and 30 deaths, the true spread could be in the range 24,000 to 140,000. In other words, the likely true spread could be between one and two orders of magnitude higher than officially reported.

An analysis of India’s travel-related data until March 24 shows that India’s screening of passengers for COVID-19 was extremely weak. Besides, research point to the inherent limits to passenger screenings. Therefore, the travel-related cases for India, most Indian cases on March 24, ought to be even a hundred times the reported number. It would be several orders of magnitude more if all travelers entering India by land, sea and air are included. While reliable death reporting can help in making good estimate of the disease spread, in India most of the deaths are not medically certified. As per official report of the Registrar General of India, in 2017 for 4 out of 5 registered deaths the cause of death was not medically certified.

India’s systemic limitations in measuring the epidemiological metrics, an inherent tendency to under report, and the institutional deformities present a huge challenge to understanding the pandemic. Adding to all these difficulties is the reality of social stigmatization, communal divisiveness and the appalling arrangements made for quarantining the infected individuals bordering on treating the infected more as social outcasts than victims of the disease. There are too many reported instances where the quarantine facilities that ought to be like hospital wards being unfit for human habitation. There are also serious adverse public health consequences to the sudden and unplanned lockdown and its implementation blind to the disruptive impacts. It has most likely elevated the overall mortality due to extreme distress and disrupted basic healthcare services. As India is about to reach the end of the nightmarish lockdown, there are many lessons to be drawn from the successes and failings across the country. Perhaps, if India is a lot more humane in its approach and attempts to measure the epidemic better, the people of India will suffer a lot less.