For the last few years, Wangkhem has been in and out of jails, labeled as someone very dangerous for the nation by influential persons who have slapped him with sections of the draconian sedition law. 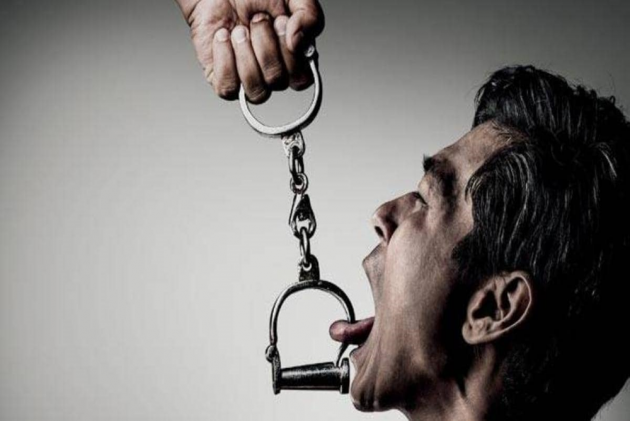 Spare a thought for Kishore Chandra Wangkhem, possibly the most powerful symbol of one who has suffered the most for the rampant and continuing misuse of our colonial-era sedition law.

By all accounts, this journalist from Manipur fell foul of some who are very powerful in the north-eastern state and is paying a heavy price. For the last few years, Wangkhem has been in and out of jails, labelled as someone very dangerous for the nation by influential persons who have slapped him with sections of the draconian sedition law.

Consider the following: Wangkhem is first arrested in November 2018 for Facebook posts that criticised Manipur chief minister N Biren Singh. Wangkhem’s differences with Singh were essentially political, though his social media posts contained some unparliamentary language. He was promptly arrested and thrown in jail, until the Manipur High Court came down hard on the state and ordered his release in April 2019.

‘If People Are So Against Sedition Law, Why Wasn’t It Scrapped In All These Years?’

But Wangkhem’s joy at being reunited with his wife and children was short-lived. In September 2020, he criticised Manipur’s titular king after he was elected to Rajya Sabha as a BJP nominee, and that meant another spell in jail under sedition charges till December. He was back in jail once more in May 2021 after he posted on Facebook in the wake of the state BJP chief’s death that “cow dung and cow urine didn’t work”. Wangkhem and another activist arrested along with him were initially let out on bail by a local court but the state government arrested both again, this time under the National Security Act (NSA).

The point to be noted is that Wangkhem is incarcerated with impunity by officials who fear virtually no consequences for misusing a law that clearly lays down that unless accompanied by incitement or call to violence, mere criticism of a government cannot be labelled as sedition. Ironically though, Manipur officials signing Wangkhem’s repeated detentions – obviously under instructions of the state’s politicians – have had no reason to be chastised. When the High Court the first time set Wangkhem free, it criticised the state government. But no officials were named or penalised. So, the officials have had no reason to mend their recalcitrant ways.

This is precisely where the problem rests with the sedition law, a subject of renewed debate since two senior judges of the Supreme Court earlier this week observed that it was time “we define the limit of sedition”. The observation came as the judges put on hold action by the Andhra Pradesh government against two television channels for alleged sedition. That politicians in power in the state were angry with the television channels for their temerity to telecast speeches of a dissident MP was understandable. But criticism of the government cannot be sedition, and politicians couldn’t have succeeded in cracking down on the channels unless some spineless state officials colluded. As in almost every trumped up sedition case, it is clear that officials - including a police DIG who finally affixed his signature to book the channels under sedition - were seeking to curry favours with their political masters by carrying out their wishes.

Limiting the scope of sedition is welcome and it is likely that the top court will do so without any further delay. Among everything else, a petition challenging the validity of the sedition law is pending before the court. And one of the petitioners happens to be none other than Kishore Chandra Wangkhem.

But the likes of Wangkhem will only breathe easy when the fear of consequences is injected into the officials without whose sycophantic complicity the politicians could not have abused the sedition law so brazenly. Take for example the official who possibly signed to charge Wangkhem the first time. The High Court strongly criticised the measure, but it has not helped Wangkhem in any measure. He continues to be repeatedly harassed while the official must be still holding an important post and acting imperiously.

Such examples of blatant overreach by officials are dime a dozen. Activist Akhil Gogoi led protests against CAA in Assam. He was an inconvenient voice that the government wished to shut down, and Gogoi found himself in jail charged with sedition. He contested and won the just concluded assembly elections and it is likely he will finally win the legal battle against his incarceration as well. But will the officials who colluded against him ever be called to question?

Our past gives us little confidence that high officials will ever be made to face the consequences of their misdeeds. It was decades ago that an ISRO scientist Nambi Narayanan was falsely accused of being a spy and jailed. A tenacious Narayanan fought a long court case and cleared his name. He won a compensation too. But his efforts to get Siby Mathews, the police officer who he accused of being his principal tormentor, punished has not led him anywhere so far. For that matter, Mathews rose to become Kerala DGP and subsequently retired.

Nothing similarly threatens to derail the career graph of Chandra Bhushan Singh, who as the district magistrate of Aligarh had last year charged Dr Kafeel Khan under sedition for a speech he made. Khan, suspended and jailed a couple of years ago for the death of children at a Gorakhpur hospital over oxygen shortage, has been a critic of the state government. He criticised the state often, but one of his speeches got him into serious trouble when Singh as the Aligarh DM charged him with sedition for inciting communal violence. According to Khan, he was picked up by police, beaten up severely and then dumped in jail until the Allahabad High Court freed him months later.

The court was caustic in its ruling against Singh. It found nothing objectionable, least of all anything seditious, in Khan’s speech and wondered whether any reasonable man could have arrived at the inferences that the Aligharh DM did. While Khan forfeited many months of freedom and suffered abuse, it is not known whether the IAS officer has had to suffer any setbacks for wrongly branding a speech as seditious.

Minus consequences, it emboldens officials to purposely err. The officialdom allows them anonymity and even if their actions come under court criticism, they mostly escape culpability. A similar pattern is most likely at play in most high-profile cases of today, including the one over Elghar Parishad that has seen several top academics and activists jailed under serious charges.

But now that the Supreme Court is seized of the serious matter of sedition, there is scope for hope. Article 142 of the Indian Constitution provides for ‘Complete Justice’ that the top court can cite for laying down guidelines to deal with misuse of the sedition law. Once done, courts across the country will be empowered to simultaneously order reparations and punishments while throwing out frivolous cases. It would complete the cycle of justice and make us feel that justice has truly been served.