A Woman Alone Can Be A Dangerous Thing!

March is definitely a month celebrating Women’s causes. As the play and the exhibition prove

She’s happy, she’s content. She loves her husband, she hates him. She is constant and suffers his beatings and bad sex, she dreams of killing him, attempts suicide...

Kiyoni Mehta as the ‘woman alone’ in this adaptation of the award-winning play of the same name, written by Dario Foe and Franca Rame runs through the gamut of moods and emotions. And portrays them with minimum visible effort to create an effective impact.

Women in the audience may find resonances in the play (that could be seen as a deadlier version of Isben’s A Doll’s House) as Kiyomi takes us through the story of her life, she loves and her disappointments.

Kiyomi’s careful study of expressions of real-life women as they boast of their lifestyle, or confide about their problems makes for involved watching; drawing the viewer into a web of half-truths that reveal her true mental state, close to breaking point. Director Savitri Medhatul and Mehta have collaborated in adapting the play to fit into an Indian framework, with some multi-lingual conversations and typically Indian references thrown in.

Though staged at Prithvi theatre, Mumbai, to live audiences, the version available to me, stationed as I am currently outside the city, was a one-camera recording. Despite which the narrative did not slacken, but held my interest, throughout.

Do not be turned off by the play’s super slow opening, where we see the heroine wearing a cosmetic face mask and polishing her nails meticulously, one finger after another before she waits for the paint to dry while leafing listlessly through a magazine. It’s a hint at the monotony of her life. Her monologue and the subsequent dialogue with an unseen friend or imagined member of the audience will start soon enough and open the door into her world inhabited by a baby, a husband at work (Adi darling), a brother-in-law(Bhai Sahab) in bandages and a creditor (*#@*) who harangues her on the phone. And oh, there is a lover too, Jignesh, a toyboy whose presence we see as a waving hand beckoning her to elope with him.

So there is enough in her life, and thus in the play, to spin a story, as you can guess.

If you are in Pune on the 4th of April and have a chance to catch a show, do so. It holds a telling mirror to the lives many women lead till they resolve to not do so any more.

Art lovers have still a chance to catch this exhibition titled Pati, Patni Aur Woke by Smish Designs at Method Art Gallery in Bandra, Mumbai. Launched on March 8 to highlight its feminist theme, the show closes on the 26th. 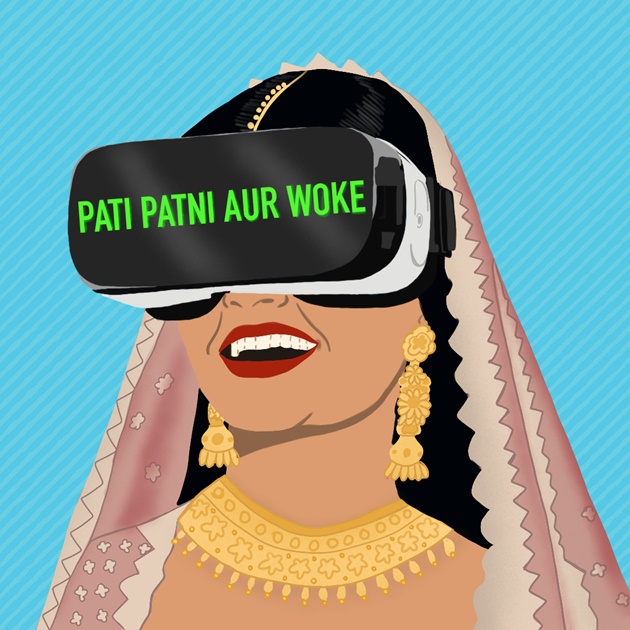 For reasons unknown, the artist, a graduate in Graphic Design from the Parsons School of Design, NY and a very vocal voice on social media, has chosen to remain anonymous. But makes a strong statement that is a clear indication of the slant of the paintings: ‘When it comes to marriage, men win and women lose, and women are starting to realise it. On the one hand, deep-rooted patriarchal traditions, culture and society mandate women to ‘settle’ or aspire for a ‘happily ever after’, while on the other, we find our so-called ‘modern’ courts delivering unequal judgments in the name of ‘sanctity of marriage. But what of women’s rights, independence and identity? Can they exist within the bounds of this grand institution? Or is it a cost we have to pay to gain respectability, security and status?’ she asks.

‘This exhibit makes a mockery of the view that marriage equals love, instead of painting images and drawing focus to unjust physical, mental and emotional labour which the second gender is subject to.’ 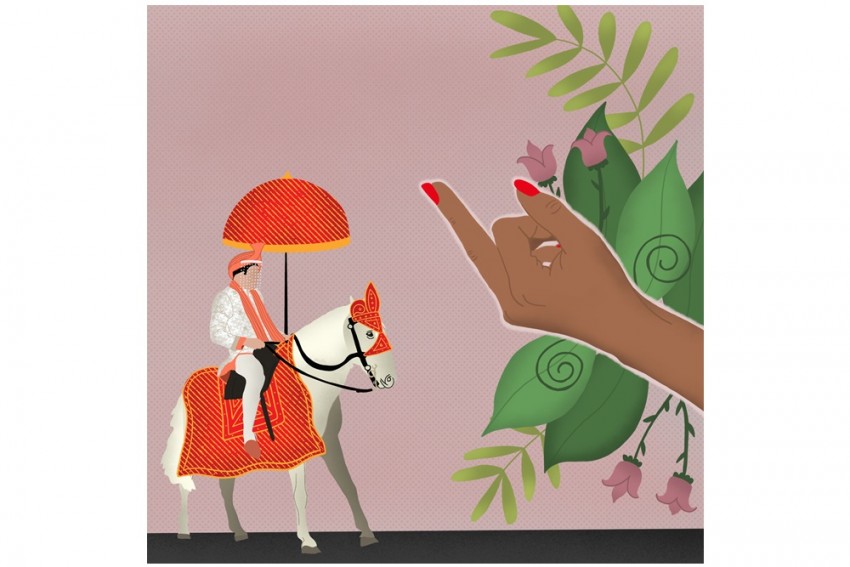 The paintings show a middle finger (yes, there is one doing just that to a groom on a horse coming to claim his bride) to the concept that marriage is synonymous with equality, love. They instead highlight the inequalities that cause physical, mental and emotional, suffering to what the artist calls ‘the second gender’ in the marriage.

Strong colours and poster-like images jump out to make their point. Worth a walkthrough, (but please wear your mask). The show includes seven images and, in the gallery's words, a few installations and a special set-up for an added viewing experience’.