10 Barriers In The Way Of Women's Participation In Labour Force

While debating the falling Women Labour Force Participation Rate, we often miss a very important point that most of the women are already working as 'household care providers.'

Women Labour Force Participation Rate (LFPR) has declined 20 percentage points between 2005 to 2018. Many studies present opposing views for this fall. The first view is an encouraging one where “increased household income” correlated with more women pursuing higher education is considered the main reason. The second view is a discouraging one where “lack of quality jobs or self-employment opportunities” clubbed with poor wages, long commuting hours, work timing, migrations, safety issues etc. restrict women’s mobility and freedom and lead to this decline.

Why women LFPR is falling is a complex puzzle to solve, especially when views are contradictory. Surely it cannot be attributed to only one or two clear reasons. Developing a holistic understanding of this multi-layered problem using different economic, cultural, and, social lenses might help in designing better solutions and bringing in some pertinent policy reforms. 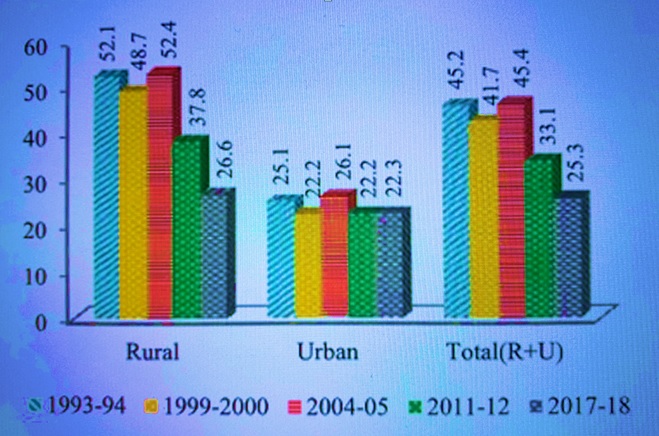 Sometimes, while debating falling women LFPR, we miss a very important point that most of the women are already working as “household care providers”. This degree may differ based on one’s economic, cultural & social status and availability of family support. Hence, when women join any job or start self-employment, their domestic duties put them in a disadvantageous position as compared to men. According to Organization for Economic Co-operation and Development's (OECD) Unpaid Care Work Paper (2014), Indian men devote only 36 minutes to unpaid care responsibilities while women spend 360 minutes doing it every day. The report also observed that gender inequality in unpaid care work is the missing link in the analysis of gender gaps in labour outcomes, such as labour force participation, wages and job quality.

In our skilling work at Dr Reddy’s Foundation, when we designed a solution to increase women LFPR by placing married women in hyperlocal jobs in cities (in the retail sector), we found that despite matching other expectations like the quality of job, safety at workplace, near to home, salary expectation, the married women still prioritised domestic duties and were willing to work only on “specific hours” that do not hinder their daily routines. These domestic duties, which include various kinds of care and household work, cannot be ignored by the majority of women in Indian patriarchal society. As per Economic Survey 2018-19, in the age group of 30-59 years, when most of the women are out of education and are married, the proportion of women attending domestic duties increased from 46 per cent in 2005 to 65 per cent in 2018.

For the first time, in the Periodic Labour Force Survey (PLFS) 2017-18, information on hours worked in different categories of paid work was collected. It is seen that in regular wage/salaried employees category, men worked 7-8 hours more in a week than women in both urban and rural areas. This difference was more than 11-12 hours in case of self-employment or casual work categories. This can be misinterpreted as “productivity” loss by employers or contractors (despite women investing 10 times more time than men on a daily basis in unpaid care responsibilities at home), and they prefer hiring men over women if there is no pertinent need that only women can do that task.

In the last two decades of our skilling work which was to prepare youth for entry-level jobs, mainly for service & healthcare sectors; we have noticed the key reasons for women who drop out from job to be divided into two broad categories: (a) Personal: marriage, lack of family support, health issues, higher education, domestic duties (b) Job Related: office distance, work timing, difficulties in getting leaves etc. Though similar reasons apply for men too (other than domestic duties), the impact on quitting the job is more on women than men due to their vulnerable economic, cultural and social status in the society.

Issues are different for different segments of women workforce, as we have various categories under self-employed and wage-employed. As per Economic Survey 2019-20, under the self-employed category, we have women employers those who hire workers (0.5 per cent), own-account workers who do not hire workers on regular basis (20 per cent) and contributing unpaid family labourers (32 per cent); under wage employed category, we have regular wage & salaried workers (21 per cent), and casual workers (27 per cent). Other than this, the third category is dependent contract worker, who generally undertake production or services on a contract (e.g. those who generally work on piece-rate basis). Now when we think of increasing women LFPR any one solution or policy reform may not work. We need to think for each of these segments, understand their key challenges and come up with solutions which will address issues related to that particular segment rather than having a blanket approach.

As issues are different for different segments, even the two key recent reforms- (a) Sexual Harassment of Women at Workplace Act-2013 and, (b) Changes in Maternity Benefit Act-2017, brought with very good intention are not very effective and creating unintended consequences. For example, employers may see women as an additional cost if they go for 24 weeks of maternity leave and prefer hiring men, especially in the case of smaller organisations and in entry-level jobs. Similarly, if the dissemination of the Sexual Harassment of Women at Workplace Act is not done properly within the organizations and introduced as a checklist agenda, it acts as a deterrent for bringing diversity in teams and most managers feel comfortable making an all-men team. Most of us must have witnessed such biases in our professional careers.

Globally many countries are able to impact women LFPR successfully, such as 80 per cent in Switzerland to 73 per cent in Japan and 68 per cent in the US, and all of them brought some major reforms like - tax cuts for second earners, childcare services, expanded parental leave policies, flexible working hours, creating enabling environment at workplace and scrapping some outdated laws to make this happen. Ruchir Sharma argued this point in his recent book The 10 Rules of Successful Nations that a 2014 survey of 143 emerging countries the World Bank found that 90 per cent have at least one law that limits opportunities for women and how countries can get a bigger economic boost from working women by just lifting existing restrictions. In India’s case introducing Domestic Workers Act can be a low hanging fruit which can directly impact more than 4.5 million such workers (of which 65 per cent are women). As per the International Labour Organization (ILO), in India domestic workers numbers are under-reported and actual numbers can be somewhere between 20 million to 80 million.

The argument that higher number of women participating in education, including higher education in Science, Technology, Engineering and Math (STEM) is the reason why India is witnessing falling women LFPR also tells us that most of these women would aspire to get quality jobs. But the Technical and Vocational Education and Training (TVET) system in India still does not offer many opportunities for women to build demand-led skills. For example out of total enrolments in ITIs not more than 13 per cent enrolment are of women and their training completion rate is less than 5 per cent. In addition to the quality and outdated curriculum which affects participants of these programs, women participants face extra challenges of lack of proper hostel infra, toilet facilities, availability of women trainers and lack of women-friendly trades. Though there are provisions for women-only ITIs (WITIs) but numbers of such ITIs are very limited as highlighted in the seminal book India Skills Challenge edited by Prof. Santosh Mehrotra.

Also, it is important to take note, despite India producing 43 per cent of STEM graduates, their participation in science, engineering and technology research institutes is only 14 per cent. As per UNESCO's ground-breaking report, Cracking the Code: Girls’ and Women’s Education in STEM, “gender stereotypes about STEM are prevalent throughout the socialisation process, during which girls learn and develop gender roles. The lack of self-efficacy (belief in one’s ability), affects STEM education outcomes and aspirations for STEM careers in women”.

The seminal book How Lives Change, which captures the learnings of a unique longitudinal study continuing since last eight decades in PalanpurVillage (Uttar Pradesh), throws interesting lights on women's participation in the village economy. The book says, “other than the casual factors of men moving out of agriculture and the availability of acceptable jobs, most women who enter the workforce can be classified in one of the three categories (a) those who have been widowed (b) suitable opportunities being available for women with some education, and (c) cases where the economic status of the household changed”. The study also found that livelihoods activities have a caste-wise pattern which influences the possible avenues for women’s participation in the workforce. It is acceptable for higher caste women to work only if the jobs are “respectable”. Similarly, various other studies suggest that LFPR of Muslim women is the lowest and among Hindu women, the forward castes have the lowest LFPR. The increased household income effect, a shift in class, is the widely discussed barrier for women labour force participation.

When Jobs are Scarce

As per Employment & Jobs, Pew Research Centre Survey, 2012 in India 84 per cent of the respondents, agreed with the statement: “when jobs are scarce, men should have more right to a job than women”. With the country’s unemployment rate at a four-decade high of 6.1 per cent as per National Sample Survey Office (NSSO) recent report, and which is further aggravated due to CODVID-19 lockdown impact, it is bound to have a negative impact on women LFPR.

The recent UN policy brief: The Impact of COVID-19 on women says “across every sphere, from health to the economy, security to social protection, the impacts of COVID -19 have exacerbated for women and girls simply by virtue of their sex”. I had a similar experience while conducting vulnerability identification exercises in ActionAid during my initial career days in Andaman & Nicobar Islands, that how disasters impacted different people differently. The key learning was that women were always identified as the most vulnerable group including single mother, widow or women with disability. The online petition which is currently live, #ChoresHaveNoGender by Subarna, a working mother from Mumbai, highlights how unequal distribution of unpaid household work has rendered the harshest blow to women across India during the lockdown. The strain on existing supply and demand of various paid jobs mainly due to reverse migration is clearly visible too.

As the Preface of Economic Survey 2019-20 quotes one of the foundational questions posed by Adam Smith, “what causes wealth and prosperity of nations?” and attempts to craft a framework of policies that can foster wealth creation in India, especially when India is aspiring to become a $5 trillion economy by 2025; unleashing the full potential of half of India’s population is a necessity. It will not only help in fulfilling the nation’s economic aspirations but will also enhance the cultural and social status of women in society. Everyone can contribute towards making it a reality. And point 1 can be a good start.