One More For Ripley's Believe It Or Not!

The mind boggles at the the kind of surreal conversations to follow: Dawood Ibrahim? We don't know him. What does he look like? Do you have a picture? Professor Hafiz Mohammad Saeed? He is not a terrorist. He is into charity... 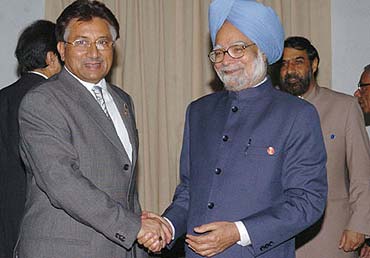 Two days after the Havana meeting between Prime Minister Manmohan Singh and General Pervez Musharraf, there is considerable confusion, if not comprehensive disbelief, over the import of the understanding the two leaders reached in their hour-long meeting over a joint mechanism to deal with terrorism.

All that we know of this is contained in paragraph three of the joint statement. It says:

"The two leaders met in the aftermath of the Mumbai blasts. They strongly condemned all acts of terrorism and agreed that terrorism is a scourge that needs to be effectively dealt with. They decided to put in place an India-Pakistan anti-terrorism institutional mechanism to identify and implement counter-terrorism initiatives and investigations."

There is no clarity on what this mechanism will look like, how often they will meet and what the body will discuss both in terms of initiatives and investigations. But it is not the mechanics of the device that is worrying, it is the preposterous nature of the suggestion that deserves closer examination.

So far there have been four defining moments in the last few years when New Delhi believed that it had found the solution to terrorism from Pakistan.

The first was in January 6, 2004 when Musharraf undertook in a bilateral commitment to prevent any part of territory under his control from becoming a springboard for terrorism. Subsequently every time Manmohan Singh has met Musharraf this pledge has been solemnly re-iterated for whatever it was worth (September 2004, April 2005, September 2005)

In the meanwhile the canvas of the terrorist operations kept widening. Infiltration that had gone down after the January 6 statement to a really small fraction of what it used to be, began to go up again. The January 6 intention was clearly not working. Terrorism as a subject was being discussed at the level of the Home Secretary as one of the subjects under the composite dialogue format. In these meetings, the Indian side would hand over the names of persons like Dawood Ibrahim, and the addresses at which the intelligence would say they were staying. The infiltration patterns would be shared, as well as some of the camps the terrorists were using. The radio frequencies in which the terrorists were communicating with their operatives in Jammu and Kashmir would be given to the Pakistani delegation. In the meeting the Pakistani side would say that all this was not true, but that they would check and get back. Later the militants would simply change the frequencies.

There has not been a single instance when the Pakistanis have provided New Delhi with any kind of lead or tip off on any potential terrorist threat or activity. Not once have they called up to say that they had credible information.

The mind boggles at the possibilities this new initiative presents Pakistan with: It would now use this forum to air its charges on India fomenting terrorism in Pakistan, be it in Balochistan or elsewhere. In effect, it would become a case of their claims versus ours at an official level - thus bringing about a parity that India has always scoffed at. You can imagine the kind of surreal conversation that happens round the table:

In contrast, there have been at least two occasions in the last few years, when India has tipped off Pakistan, through the back-channels, of the plots against Musharraf's life that the Indian intelligence had known about.

What could have happened between the Mumbai blasts and Havana meeting that has injected such a large dose of touching faith into the system that New Delhi is now prepared to believe that at last Pakistan is one hundred per cent ready to co-operate with India in its fight against terrorism which New Delhi has consistently let it be known is being sponsored, supported, encouraged, aided and actively abetted by the Pakistani establishment?

What could have happened for New Delhi to be now convinced that there is no direct or indirect support for India-specific terrorism from Pakistan?

Far more serious in its consequences is the way in which New Delhi seems to have changed the status of Pakistan from that of a state that sponsors terrorism to one that is a victim of terrorism.