Oozing quiet confidence, the cherubic youngster reveals he was never in doubt about breaking into the national side. 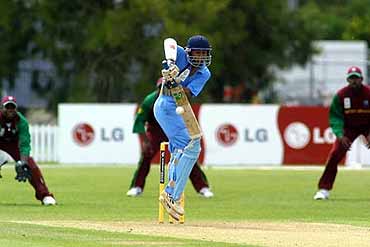 What is common between Deepak Shodhan, Jasu Patel, Nari Contractor, Rusi Surti and Dhiraj Parsana? They all represented Gujarat and also donned the Indian colours. But that was ages ago.

Parsana, the last to play, figured in two Tests in the 1978-79 home series against the West Indies. No other Gujarat player has played for India for a shade over two decades now. Not even the consistently prolific Mukund Parmar came close to doing so.

But now a young Gujarat player has put on the India jersey after such a long wait. Parthiv Ajay Patel, the 17-year-old lad from Ahmedabad, selected in the Indian team as a second wicketkeeper for the Test series in England, made his international today at Trent Bridge. At 17 years and 158 days, Parthiv became the youngest wicketkeeper ever to play in a Test and the third youngest Indian to play for his country.

Parthiv eclipsed Pakistani wicketkeeper Hanif Mohammed's record which stood at 17 years and 300 days when he made his debut against India in New Delhi in 1952-53. Earlier, Budhi Kundaran had the distinction of being the youngest wicketkeeper for India, having played his first Test match at the age of 21 years and 88 days. He had made his debut against Australia at Bombay in 1960.

At 5'3'', the dimunitive Parthiv is not only a good stumper but also a competent and reliable batsman. And he is a southpaw to boot, just like his hero Adam Gilchrist. Unlike those numerous youngsters who were generously given the India cap in the last decade or so but failed to capitalise on the opportunity, Parthiv has all the right credentials to establish himself in the national side and make a name for himself.

The selectors have shown a lot of confidence in his ability despite the fact that he is yet to play a single Ranji Trophy match. This speaks volumes of the lad's prodigious talents.

On his part, Parthiv has not let anyone down. Not yet. His potential, performance and progress are such that he looks far mature beyond his age. Not since the salad days of Sachin Tendulkar has any teenage cricketer caught the imagination of cricketing pundits in India.

Parthiv has already attracted a lot of media publicity but he continues to remain composed on and off the field. "To keep a level head is one of my virtues. I've always been like this even before I began to represent Gujarat and India at junior level. I think no sportsman can afford to be complacent even a wee bit. This is one of the lessons I've learnt very early in my career. Although I've not experienced too many ups and downs so far, I feel that you should learn to take the rough with the smooth," he said.

It was not for nothing that he was appointed captain of the Under-17 Indian team for the Asia Cup held in Bangladesh in 2000-2001. Besides his class and character as a player, what the selectors noted was his supreme self-confidence in an hour of crisis. Parthiv not only led the team successfully but also saw that it won the tournament.

So consistent was Parthiv behind and in front of the wickets that, irrespective of his age, the selectors had to pick him in the India A team that toured South Africa and Sri Lanka recently. Inspite of the presence of several players who had represented India in Tests and ODIs, he held his own and impressed all, including coach Yashpal Sharma, who described Parthiv's performance in the rainbow nation as "outstanding".

For someone so young, these are really impressive statistics, keeping in mind that Parthiv had been up against different conditions in Bangladesh, New Zealand, South Africa and Sri Lanka.

The national selectors, looking for a dependable wicketkeeper who could also make substantial contributions with the bat, took all these factors into consideration before deciding on him for the England tour ahead of the likes of Deep Dasgupta, Samir Dighe, Vijay Dahiya and, of course, Nayan Mongia.

Was he surprised at his selection? "Not really. I was always confident of breaking into the senior national team after my reasonably good showing abroad and also the way I had been encouraged by key BCCI personalities, including selectors. Of course, my selection at such a young age must have surprised many in India. I think this is a just reward of my services to Indian cricket," he explained.

It is as an understudy to Ajay Ratra - who himself is a young and talented wicketkeeper-batsman - that Parthiv is touring the Old Country. Though a four-Test series, it was very likely that he may not have played today had Ratra not pulled out with an injury.

"They say the English weather and wickets remain unpredictable and are a true test of a youngster's skills and temperament. So I look upon the England jaunt as a good learning experience. I'll grab the opportunity and try my utmost," he averred.

That Parthiv can keep his nerves even in trying circumstances on the field is understandable as the Patels live in one of the most communally sensitive areas of Ahmedabad - Dhana Sutharni Pol near Relief Road. Infamous for frequent spells of communal riots, the area has suddenly become famous for its star cricketer.

Parthiv is used to handling difficult situations since his birth on March 9, 1985. When his mother, Nisha, complained of labour pain, there was curfew in their area. A way was found out somehow to rush her to the hospital. Curfew was again clamped when Nisha returned with little Parthiv in her arms.

"So many times have we seen stones, nails and crude bombs being thrown at our old building. I remember everything since I was seven or eight-years-old. I'm now used to all these things," he revealed and his father Ajay, a small trader, agreed.

Parthiv began playing cricket seriously at the age of 9 and by the time he was 12 he started participating in inter-school tournaments in Ahmedabad. Based on his performances he was soon representing, even captaining, Gujarat and West Zone in various age-group junior tournaments conducted by the BCCI.

Though he has many stunning performances to his credit, one particular display against Maharashtra in an under-16 tie deserves mention here. Opening the innings, Parthiv made 101 in Gujarat's first innings total of 196 in reply to Maharashtra's huge score. Following on, Gujarat managed to draw the game and salvaged some pride thanks to Parthiv's unconquered 201.

Having hogged the headlines, Parthiv was never short of encouragement. It did not come as a surprise when he was chosen for the National Cricket Academy in Bangalore. His skills, whether armed with the gloves or the willow, made a good impression on the coaches there and he was singled out for special treatment. Soon  he was leading India to the Under-17 Asia Cup triumph in Dhaka.

The reward was a 45-day stint at the famed Commonwealth Bank Cricket Academy in Adelaide, Australia, as part of the Allan Border-Sunil Gavaskar scholarship. Watched and guided by the likes of Wayne Phillips and Ian Chappell, Parthiv cherishes the crucial tips he learnt from the legendary Rodney Marsh.

Parthiv's strength is his "safe" pair of hands. Marsh taught him how to gather the ball with the body right behind it. Though he appears to be quite comfortable against speedsters as well as spinners, Parthiv says slow bowlers, particularly leg-spinners, more so someone like Anil Kumble, who sometimes makes the ball lift awkwardly, can pose a real challenge.

"If your reflexes are smooth, judgment perfect and gathering neat and clean, there should not be any problem," he added. "Having said that, I must admit there is still a lot of scope for improvement in my work behind the stumps. With more and more exposure and experience, I hope I will be able to sharpen my talents in this particular department."

As a batsman Parthiv is nothing less than flamboyant when the mood is on him. However, he can check his bouts of aggression and drop anchor when needed. "I've opened and also batted in the middle order in both forms of the game. I don't have any particular favourite batting position. I just love to bat and play my natural game as far as possible," he remarked.

The lad has had a host of coaches, including Yogendra Puri, Shailesh Pandya, Niketan Walera, Narendra Sharma, Ashok Saheba, Anil Parthiv, Raju Bhatt, Hitesh Parthiv and Vijay Parthiv, but the man who has played a pivotal part in Parthiv's cricket and mental development is uncle Jagat Parthiv.

Acknowledging the contribution his coaches, Parthiv said "My uncle is the single most influence on me, my cricket and my career thus far. Rather than a relative, he is more like a friend, philosopher and guide to me. I wonder if I would have reached so far without his help and guidance. He always dreamt of seeing me play for India in Test cricket.

A State Bank of India employee, Jagat, 42, has vowed to remain a bachelor to pay attention to the progress of his precocious nephew. "I had recognised Parthiv's innate talents very early. I knew that if nurtured properly, Parthiv would grow into a very fine player. I'm glad he has proved me right. He is a very hard working boy who has not allowed laziness to enter his his body, mind and even cricketing lexicon," remarked Jagat.

"Parthiv has done Gujarat proud. The news of his selection has brought welcome relief in the riot-ravaged state. He is very gifted, determined and committed. He has it in him to serve Indian cricket for years. It's not only his sound technique as a wicketkeeper and as batsman but also his mental toughness that has stood Parthiv in good stead regardless of his tender age. This lad will go places," said Hitesh "Pochi" Patel, joint secretary, Gujarat Cricket Association.

A bright student (his glasses give him a scholarly look) in his own right, Parthiv is in Class XII of Vidyanagar School in the Usmanpura area of Ahmedabad. He could not take his annual exams, first because of his overseas tours and then due to the riots. "I'm not worried about my studies so long as I'm doing well in my cricket," chirped a cheerful Parthiv, who hopes to complete his graduation in Commerce in the future.

The cherubic Parthiv is also fond of reading, watching Hindi films, listening to soft music and "spicy" Gujarati food. Now that he has made his Test debut, Parthiv is aiming at holding on to his place in the team. "I want to play regularly for India and bring many laurels for my country," he had emphasised before embarking on the England tour.