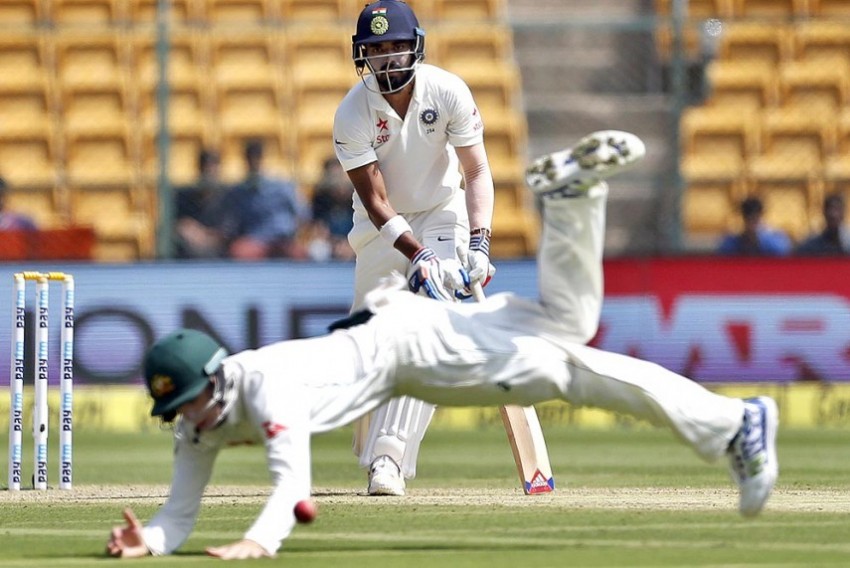 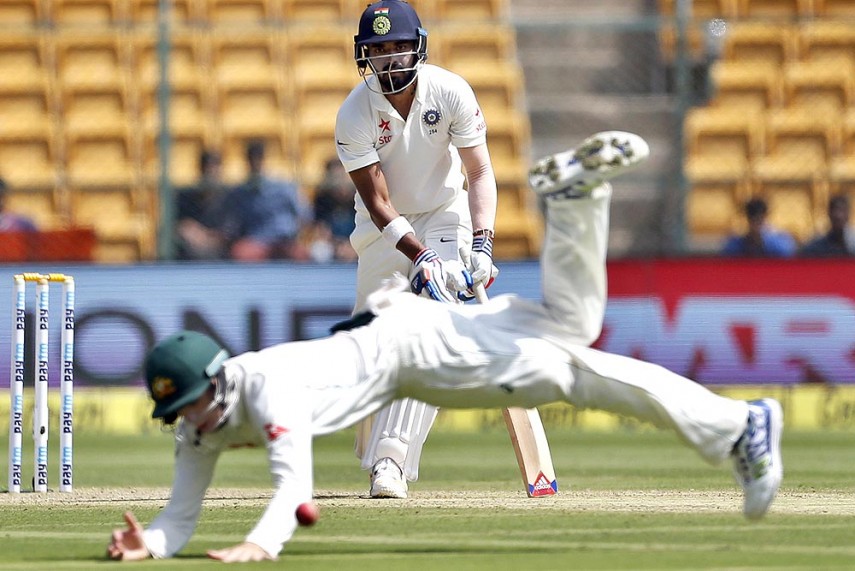 outlookindia.com
2017-03-04T18:41:39+05:30
The ghosts of Pune continue to haunt the Indian batsmen here in Bangalore. After the strong-looking Indian batting line-up failed miserably in the first Test against Australia, it again collapsed inexplicably on the first day of the second Test here on Saturday. But credit is due to off-spinner Nathan Lyon who demolished it single-handedly with a brilliant eight-wicket haul.
After getting bowled out for 105 and 107 in the first Test in Pune, Indian batsmen did only slightly better in the first innings of the second (189 all out in 71.2 overs, after Virat Kohli won the toss), but that was not good enough to infuse hope of winning the four-Test series. Australia finished the day at 40 without loss in 16 overs.
Lyon was the proverbial cat among the pigeons as he simply created havoc with his mesmerising off-spinners, to which the Indians had no clue and answers. He ended up the first innings with excellent figures of 22.2-4-50-8. The 29-year-old spinner thus, became the first visiting bowler to take eight wickets on the first day of a Test on Indian soil, the previous best being West Indies fast bowler Andy Roberts’s 7/64 in Chennai in 1975.
With his magnificent burst, Lyon became the most successful Australian bowler of all times against India, with his tally now reading 54. He overtook 53 wickets taken by fast bowler Brett Lee, who watched the action at the M. Chinnaswamy Stadium as a television commentator.
Spinners continue to rule the roost in India’s home season. In all, nine of the 10 India wickets to fall went to spinners on Saturday as left-arm slow bowler Steve O'Keefe bagged the other wicket while fast bowler Mitchell Starc dismissed the comeback opener Abhinav Mukund, who failed to score. Mukund was playing his first Test since 2011.
The top scorer for India was KL Rahul, who scored a sedate but crucial 90 (205 balls, 9x4s), though is patience wore thin his hhihis patience wore thin towards the end. With wickets falling in quick succession at the other end, he attempted to increase the pace of scoring runs but failed to connect a Lyon delivery and was caught out in the field off a miscued shot.
Rahul, who was the top scorer with 64 in the first innings in Pune, clarified after the day’s play that he did not play that ambitious shot due to tiredness or cramps, but with the sole aim of scoring runs quickly.
This is India’s 11th Test match of the season and two more matches in the series remains to be played in this series. Naturally, Indian players could be fatigued mentally, if not physically so much. Or, it could be both.
The Indian batsmen’s, particularly Ajinkya Rahane’s, miserable run against spinners continues. This season, spinners have now dismissed Rahane 11 times in 15 innings that he has played. On Saturday, he scored 17 off 42 balls before, rather unnecessarily, he charged down the pitch against Lyon and was stumped.
Captain Kohli was again dismissed when he offered no stroke to a Lyon delivery and was adjudged LBW. In the second innings of the first Test, with India’s back against the wall, he had left a straighter one from O’Keefe and was bowled in Pune.
And as captain, Kohli continues to change his playing XIs to conform to his horses-for-courses policy. This is his 25th Test as captain and here again he made two changes in the XI that had lost the Test by 333 runs in Pune. This means that Kohli has not picked the same XI in two consecutive Test matches.
Mukund staged a comeback after five-and-a-half years and Karun Nair, who was dropped for the first Test after scoring a triple century on debut to accommodate Rahane, too returned to the XI. Murali Vijay (left shoulder injury) and off-spinner Jayant Yadav were dropped.
Vijay’s injury seems bizarre. The BCCI announced that he had “sustained the injury whilst diving on an outstretched arm during the first Test in Pune”. This means that he carried the injury to Bangalore, but the team management, including Kohli, kept the news under wraps, maybe as part of a strategy.
The pitch at the M. Chinnaswamy Stadium looks slightly better than that of Pune. But this one too is assisting the slow bowlers. Now, it is up to Indian bowlers, particularly Ravichandran Ashwin and left-armer Ravinder Jadeja, to make inroads into the Aussie batting line-up. Sunday’s play would be crucial, maybe decisive too as it would indicate which way the match is heading.
Qaiser Mohammad Ali in Bengaluru
For in-depth, objective and more importantly balanced journalism, Click here to subscribe to Outlook Magazine

After Pakistan Suspends Players For Betting, BCCI Anti-Corruption Unit To Be 'More Careful, Alert' During IPL