Of Oriental Princesses And White Slags

A national debate on race relations does need to take place. But it must be more complex than the simple binaries and easy scapegoating provided by Celebrity Big Brother's mud-wrestling idiocies. 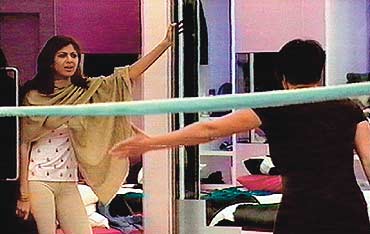 When Jade Goody, Shilpa Shetty’s tormentor-in-chief, made a tearful penitent exit from the Big Brother House a few days ago (to be followed, apparently, by a penitent pilgrimage to India), it was not a triumph for anti-racism. It tells us rather more about the trivialising of politics and narrowing of political consciousness. It was the triumph of weak and lazy political correctness which, in the long run, will undermine real, more sustained anti-racist work. As a nervous Jade was subjected to a Socratic exercise in political correctness by McCall, an unlikely schoomistress, I felt twinges of that familiar discomfort we all felt last week witnessing the spectacle of one person forced to confront determined and more powerful interrogators.

The offensive remarks made on Celebrity Big Brother reeked of schoolyard racism and xenophobia. During my teenage years an English friend insisted that I smelled of curry. Perhaps I did and still do (but subtler cuisine than this dreadful British pub variety). It’s a rare Asian kid that hasn’t experienced some form of juvenile nastiness and worse. Repeatedly referring to someone as ‘the Indian’ dehumanises them. Shilpa ‘Fuckawallah’ is not the innocent concoction of someone straining to recall a surname. It stems from the complacent carelessness of an ethnic majority than doesn’t need to learn anything about the minorities in its midst, even how to pronounce a name. Many of us routinely deal with variants of such behaviour in our daily lives. I, like many other Asians and blacks, have been hit and called a ‘fucking foreigner’, even in the cobbled streets of genteel Cambridge.

For British Asians, the public display of familiar battles poked at raw wounds, inspiring large numbers to protest. I would feel a lot more excited about this apparent resurgence of anti-racist awareness if recent years had shown evidence of a real activist spirit among us. Where were these tens of thousands of protesting voices when young Zahid Mubarak died at the hands of a white racist cellmate with whom he should not have been made to share a cell? When a few hundred Sikh women protested alone at discriminatory treatment by British Airways meal supplier, Gate Gourmet? When British Asian Muslims have been confined and tortured illegally in that black hole of racism known as Guantanamo Bay with the acquiescence of the Blair government? Why did only a small minority of British Asians speak up when ‘Hindu’ criminals in the state of Gujarat, to which many are linked by familial ties, raped and killed thousands of Muslims in horrific pogroms in February 2002 in an attempt at ethnic cleansing?

Too many of us have been busy unhooking themselves from the collective term ‘British Asians’ and dividing ourselves into Hindu, Sikhs, Muslims, Indians, Pakistanis and Bangladeshis. The terms ‘Asian’ and (heaven forbid now!) ‘Black’ were rallying points in the anti-racist organising of the 70s and 80s whereas ‘British Asians’ as a category have been largely absent from recent political discourse. Few displayed the kind of outrage CBB has elicited when institutional racism in police forces was exposed. I can’t help wondering where these angry voices were when a Sikh playwright, Gurpreet Bhatti, was, yes, bullied by loud voices within her own community and even subjected to death threats. Why is ‘profiling’ seen as a ‘Muslim’ issue? Where were the custodians of Asian dignity when crews filming Monica Ali’s eponymous novel were hounded out of Brick Lane by Islamists and chauvinists? When artist M.F. Hussain’s exhibition was shut down because of vandalism by goons apparently representing hurt Hindu sentiments?

Of course, a large part of the problem is precisely this: apart from the sterling work done by a few dedicated individuals and organisations, anti-racist politics has itself become a facile ‘representations’ game which involves appeasing the fragile sensitivities of a vocal few claiming to represent the community as a whole. It is about harassing artists and writers, demanding that they conform to ‘right’ ways of representing the community. Meanwhile, India’s favourite cultural pastime currently is ‘Representing the Nation’, the very task Shilpa announced for herself as she entered the BB compound. As the country anxiously finds its place within the community of big global players and tries to reconcile its obvious economic successes with the glaring (and often, deepening) inequalities that still mar its social landscape and self-image, it is increasingly obsessed with disseminating the myth of the nation as fundamentally middle-class, professional and successful. The task has partly fallen on the feminine shoulders of India’s flourishing glamour industry. Thus the national delirium in 1994 when Indians won both the Miss World and Miss Universe crowns.

This anxiety to belong to the global community of the economically successful explains Shilpa’s repeated protests that she is not from the ‘slums’ and did not grow up on the ‘roadside’ (she’d include council estates, if we had them in India). For all her disagreements with Jade, they seem to agree that economic disenfranchisement is a personal failure and that success is defined by ‘making a name for oneself’ in the world of glamour. Shilpa understands her task clearly: to ‘show’ the world that India is really about beauty and entrepreneurial success, not slums and poverty. Losing neither time nor opportunity, India Tourism brought out a full page ad in the Guardian last week in the form of an open letter to Jade Goody inviting her to experience its ‘modern thriving culture’, ‘bustling cosmopolitan cities and quiet countryside’ and high-quality ‘healing spas’.

Even more disturbing is the way in which Jade and her ‘chav’ milieu provide grist for the mill of self-congratulatory political correctness among upper-class white Britons. Pious editorials as well as impolitic outbursts from the likes of Edwina Currie deplore the behaviour displayed by ‘slags’—as though racism an exclusively lower-class phenomenon. If anything, it is even more entrenched—because unacknowledged—in higher echelons even if it sounds different murmured over a glass of sherry. Gordon Brown joined the Game of National Mythologies deploring the ways in which Jade and others did not represent that hackneyed British mantra: ‘a nation of tolerance and fairness’. 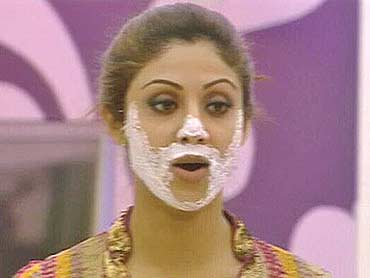 Also nauseating is the play-off between Ugly White Slags and Beautiful Indian Princesses—a familiar Orientalist male fantasy. With breathtaking lack of self-consciousness, The Independent’s editorial of January 20th described a contest between ‘the low-life Ms Goody’ and ‘a pampered Indian megastar of singular beauty’ (that Shilpa is hardly a megastar is beside the point). Stuart Jeffries in The Guardian deplored ‘ugly, thick white Britain and ‘one imperturbably dignified Indian woman [displaying] the supposed British virtues of civility, articulacy and reserve’. Shilpa does deftly combine Orientalist fantasy and Lord Macaulay’s successfully realised Anglicist project of creating ‘a class of persons, Indian in blood and colour, but English’ in other ways (though she was arguably working on the colour bit with a jar of bleach while pondering elocution lessons for British proletarians).

A national debate on race relations does need to take place. But it must be more complex than the simple binaries and easy scapegoating provided by Celebrity Big Brother’s mud-wrestling idiocies. For this, all of us must take a good hard look at racist practices and our own complicity in it. Let’s have done with the bullying on all sides.

Dr Priyamvada Gopal is Senior Lecturer of English, University of Cambridge. This is a version of an article that first appeared in the Guardian, London.