Now For A Saudi 'New Deal'

A handful of rapidly aging princes control the global center of both oil production and the Islamic faith; its politics could endanger worldwide stability. 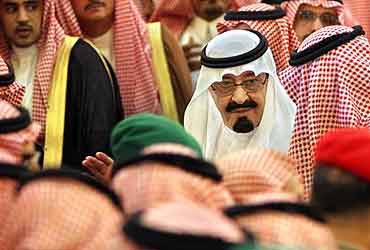 Shortly after the death and burial of King Fahd, Saudi tribal leaders, senior religious scholars, and other notables pledged allegiance to the new king Abdullah in a traditional ceremony known as Bayaa – essentially the Saudi version of the social contract. However, in this model, the citizens are expected to defer all political matters to the rulers and religious authorities. For his part, the king is supposed to lead the community in accordance with the laws of God. This "deal," as Bayaa is loosely translated from Arabic, needs some renegotiating.

Just as Franklin Delano Roosevelt felt it necessary to initiate a New Deal with the American people in response to the dramatic changes since the country's founding, Abdullah must now consider similar steps. FDR's New Deal changed the basic assumptions about the obligations of the state, and Abdullah's new deal must be just as drastic.

Since the founding of the Kingdom, Saudi political discourse has revolved around mostly religious concepts, applied in a political setting. The rulers eliminated the prospects for pluralism by claiming that they alone have legitimacy, since they have the support and consent of religious scholars, the ultimate authorities on Islam. Add to that arrangement the claim that the Quran is the constitution of Saudi Arabia, and one is effectively discouraged from ever questioning the political system. The implication is always there: One who supports reforming the system is trying to improve on the Quran, the word of God.

But the ramifications of the Bayaa's rigid hold on Saudi Arabia reach far beyond the country's borders. What happens domestically in the kingdom has implications for the rest of the world. As the birthplace of Islam and the world's largest oil exporter, Saudi Arabia plays a crucial global role. Should Saudi oil production be disrupted as a result of domestic turmoil, the effects on the global economy could be devastating. And as guardian of two of Islam's holiest sites, the Saudi religious establishment – along with its fatwas, or edicts – is extremely influential among Islamic scholars worldwide.

But why is a New Deal necessary? And why should the government willingly reform itself, when it controls virtually every aspect of Saudi society? The simple answer is that a more inclusive, democratic system will not only ensure the stability and prosperity of the country as a whole, but will also likely improve the chances of the royal family surviving what are bound to be turbulent times in the future.

It is becoming apparent that a handful of rapidly aging princes cannot continue to exclude a fast-growing and predominantly young population from the political process. As oil revenues declined in the late 1980s and the generous government outlays and subsidies were cut, poverty and unemployment increased across the kingdom. At the same time, the population, led by moderates and liberal reformers became more willing to question the efficacy and fundamental nature of the political system. Reformers attempted to politically mobilize the population and demanded significant political reforms aimed at creating more accountability, transparency, and participation in government.

This growing segment within Saudi society should be embraced by the new king. These men and women have taken the bold step of presenting several petitions to then-Crown Prince Abdullah in 2003, asking for a more democratic and accountable government. They hope to change a closed, largely intolerant political culture that perpetuates subservience to authority figures into one that is open, tolerant of personal differences, and where Saudis begin to consider themselves as citizens with rights – not subjects of a king. The reformers are young and old, liberal and moderate, and come from different regions in the kingdom. They are academics, writers, journalists, poets, students, and include many women. Most importantly, they are not extremists.

Collaborating with reformers will enable the government to confront its most menacing foe: Islamist militancy. Saudi Islamist extremism led to the 9/11 attacks, and a preponderance of Saudis are now among the foreign suicide bombers involved in the Iraqi insurgency. Spurred on by religious scholars and imams, who for years preached Jihad in all its various forms, many Saudi youths became eager to join militant organizations inside and outside the kingdom. The Saudi government has fueled this extremism by funding and exporting mosques and Islamic schools that adhere to the Wahhabist doctrine. The prevalent form of Islam in Saudi Arabia, Wahhabism preaches a strict interpretation of the Quran – and its followers consider non-believers to be enemies. The government has acknowledged that its curriculum needs updating and has reined in most of its scholars and imams. Extremism will lose its appeal only when other liberal Saudis are allowed to freely express their visions for the future. Political liberalization and continued democratization should broaden the public sphere.

Although the system remains best characterized as an absolute monarchy, where most laws and policies are promulgated by royal decree, the government has taken some modest steps that indicate its begrudging realization that reforms are needed. It promulgated the Basic Law in 1992, created the Consultative Shoura council and held partial nationwide municipal elections in 2005. Most of these initiatives were undertaken after Saudi reformers presented to either King Fahd or Crown Prince Abdullah petitions that included a comprehensive program of reforms.

In addition to democratization and liberalization, the Saudis must realize that they will inevitably need to create two institutions: a civil constitution and a comprehensive income tax system. The claim that the Quran is the constitution of Saudi Arabia is a non-starter. After all, how can the government claim a lengthy religious text as a guide for its citizens when religious scholars have still not reached a consensus on its meaning and spirit – 1,400 years after its revelation? (There are four major schools of interpretation in Sunni Islam alone, with significant differences among them.) As long as the government refuses to promulgate a civil constitution, inspired by Islamic principles and traditions, politics will continue to be the purview of religious scholars and their political allies.

Although unlikely to be a popular measure, income taxes will be crucial to transforming the system from one where the people are dependent on government outlays to one where government officials become accountable to the people. An expansion of elected positions at all levels of government must also accompany both measures to truly complete the transition to a system where government serves the needs of the people and not vice versa.

Indeed, Saudi Arabia occupies a special position among the nations of the world. It prides itself in being a leader among Islamic countries and it holds sway over other Arab countries. Maybe it is time that it plays its part in bringing democratic and accountable government to the Middle East, so that that region can no longer aptly be referred to as a "political wasteland." Already in his early 80s, King Abdullah does not have a lot of time to establish a lasting legacy. There are many who believe that he is a reformer at heart. Now is his chance to prove them right.