Short boundaries, locked stadium doors and security personnel looking the other way when thousands of lives can be at stake. Someone needs to accept responsibility. Who will that be in the PCB? 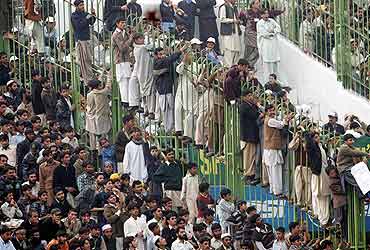 One of the most important things that the Pakistan Cricket Board really needs to consider over the remaining four games in the one-day series with India is to restore the boundaries to a healthy distance. At the Arbab Niaz Stadium in Peshawar on Monday, the boundary could not have been more than 65 yards, 70 at best, away from the wicket.

The distance of the boundaries was a big reason for the high scores in that game. Quite a few hits that went to the boundary could have been saved had the match been played with at least 75 yards. As many as 639 runs were scored and as many as 340 of those came from boundary hits (73 fours and eight sixes).

The PCB has to ensure that the boundaries are a minimum of 75 yards. In these times when even miscued hits fly a long way over the fence, it is imperative that the bowlers are afforded some sense of security. Even if one-day cricket is nearly all about big hits and tall scores, the bowlers do need protection from being made to look more inferior.

The other important thing that the PCB needs to consider is ensuring some amount of discipline with ticket sale and regulating entry of ticket holders into this quaint stadium. It did look like there was as many people waiting to get into the ground – with what looked like genuine tickets – as there were inside, cheering the batting show.

Many security personnel, mainly from the Khyber Rifles, were present at every gate that led into the ground but they were helpless as all doors were locked. Once that was done, none could go in – or for that matter come out. It was not funny, you could not leave the stadium however badly you wanted to.

A sizable number of the media corps was also stuck outside the stadium, some smart Khyber Rifles policeman having locked the entrance to the press gallery. No amount of banging on the steel doors would draw anyone to come near the door, let alone unlock it and allow the dozen and a half media persons to get in.

After nearly an hour and half, we were able to get PCB's amiable Asad Mustafa on our phones and he tracked down his colleague Col Naushad who led us in through another gate for which the keys appeared almost magically. We waded through a packed crowd and could sense the awe on the faces of these people as we walked past.

The idea of locking up gates is never going to be a great one and if it was a football match that was played with the exit gates locked, the world football body FIFA would frown upon such a practice and blacklist the venue. Going by past record, however, the ICC would turn a blind eye to what happened in Peshawar.

It was quite a miracle that the match passed off without an incident in the stands but I can't figure out which is worse: the act of locking up the stadium doors because the security personnel cannot handle the surge of crowds or the act of looking the other way when thousands of lives can be at stake.

It was just as well that Pakistan batted long enough despite poor light nearly throughout its chase. Some suggested that it was done to avert crowd trouble and the more uncharitable thought that the game continued with commercial interests of the TV company and the sponsors in mind.

But someone needs to put his hands up and accept responsibility. Cricket games should not be played in stadia whose gates are locked, not just closed. Who will that be? Your guess is as good as mine.