No Skin Off The Dragon's Nose

Confident in their government's ability to control an old ally, the Chinese remain unruffled about North Korea's nuclear program. It remains more curiosity than threat 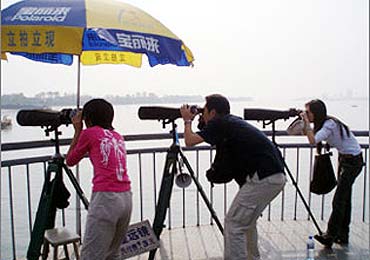 The city of Dandong in northeastern China has built a thriving industry around North Korea–gawking. Tour boats speed across the river within feet of the North Korean shore, carrying middle-class Chinese tourists who strain for a glimpse of their Communist neighbors. The boats dock at a sparkling, tree-lined promenade. Visitors can walk the remaining half of the Yalu River Bridge, bombed by Americans in 1953, to its dead end in the middle of the river. Tickets to walk the bridge cost about US$8 – binocular rental and North Korean souvenirs not included.

It’s easy to leave Dandong with the feeling that China treats its neighbor as a tourist attraction. Judging from conversations with more than a dozen Chinese people – taxi drivers, journalists, shop owners, teachers, students and fruit vendors – the Chinese man-on-the-street regards North Korea primarily as a curiosity. It may require a slap on the wrist, but is certainly no force to be reckoned with on the world stage.

Of course, the distance between Chinese public opinion and official policy is often wide. North Korea’s recent nuclear test, less than 50 miles from the Chinese border, may have rattled officials in Beijing. One statement called actions by the Democratic People’s Republic of Korea (DPRK) "flagrant" and declared the Chinese government "resolutely opposed." After long insisting that multilateral negotiations coupled with humanitarian aid would control North Korea’s nuclear ambitions, the government agreed to partial economic sanctions, including a reported temporary halt on oil shipments to DPRK. That gamble may have paid off: Last week, North Korea agreed to return to the negotiating table.

But while their government sprung into action, most Chinese shrugged.

"Of course I’m not worried," said Yi Zhiping, a Chinese language teacher at Tsinghua University in Beijing, while having lunch in a crowded cafeteria with another teacher and several American and Japanese-American students.

"China and North Korea are close allies," she noted, brushing aside government statements that take an increasingly tough stance toward the DPRK. "The government will take care of all this. We’re more concerned about Japan attacking us than about North Korea."

Her colleague Yao Wei agreed. Asked if anything about a nuclear North Korea worried her, she seconded, "Japan." That sentiment seems common. If the Chinese are concerned, it is not that the North Koreans might train their weapons on China, but that any military conflict over Korea would necessarily pit China, North Korea’s closest ally, against Japan. That would strain historically cool relations that have grown frosty in recent years, though they may have thawed a little with the visit of Japan’s new Prime Minister Shinzo Abe.

The worry about Japan may belie larger concerns about American domination: Criticizing Japan is socially acceptable in China, while many Chinese are more hesitant to criticize the US, especially to an American journalist. After 30 minutes of conversation, Yi and Yao broached the subject. "All this hype about sanctions and multilateral action is just the US wanting to keep the rest of the world from becoming powerful, too," Yi said. "Why shouldn’t North Korea have the right to conduct nuclear research?"

One reason it shouldn’t, some Chinese say, is that size matters. "North Korea is just too small," said Wang Jiewen, 49, a taxi driver in Datong, a coal-mining city near Beijing. Small countries, he said, often make decisions without regard for consequences to the rest of the world.

"They don’t take any responsibility for their actions and what might happen next," Wang said. "It just shows how vain they are."

Despite their criticisms, Wang and other older Chinese compare North Korea today to China in 1964, when it conducted its first nuclear test: an isolated country suffering under socialism, trying to gain credibility on the world stage. For some, like Yi, that comparison is further justification for North Korea’s actions. Passing judgment on a starving society that wants to be taken seriously could be seen as hypocritical given that China was in similar shoes not so long ago.

Others, including Wang, see those similarities as a hopeful sign that North Korea may follow China’s footsteps toward a more open society with a modified form of socialism. Their reasoning is based on a sense of Communist camaraderie with their neighbor, information gleaned about the North from the Chinese media and widespread agreement that life in China has improved since 1964. That’s especially true for those who remember China’s nuclear debut as an early landmark moment in the country’s opening up to the world. Why wouldn’t North Korea want to follow China’s example?

But members of the younger generation remain skeptical of drawing parallels between North Korea and China. China’s test was during the height of the Cold War, when the nation was isolated from an outside world that was itself not so interconnected. As Peking University graduate student Sophia Jin, 24, said, "What about all these years of globalization? The world is a completely different place now."

Jin and her contemporaries hardly regard the North Korean nuclear program as a crisis and seem largely unconcerned with politics. "This doesn’t really affect me, so I don’t really pay much attention," Yao said. "Politics is the government’s business, not mine."

The lack of opinion may reflect a shoulder-shrug attitude toward politics in general, or it may be a referendum on China’s worry about a nuclear North Korea. A recent Chicago Council on Global Affairs study, conducted before the nuclear test, found that, "Instability and conflict on the Korean peninsula" ranked eleventh most important out of 13 potential threats to national interests. The AIDS epidemic and avian flu topped the list.

Just 28 percent of Chinese considered the possibility of "unfriendly countries becoming nuclear powers" to be a critical threat. That may be because they don’t consider DPRK an "unfriendly country." Those surveyed described China’s relations with North Korea as "quite warm." The world’s ability to contain North Korea may depend on whether their perception of the political climate is accurate.

Still others give the issue a shrug because cynicism toward North Korea is so deeply ingrained. That’s particularly true of those living on the border, for whom firsthand experience with refugees or North Koreans doing business in China holds more sway than government propaganda or Chinese history – experiences that, in many cases, have left the Chinese with negative impressions of their counterparts across the Yalu River.

"What can you do? They’re just poor and belligerent," said Zheng Linhu, a taxi driver from Jilin Province, which borders North Korea. Ethnically Korean, with ancestral roots in the DPRK, Zheng was born in China and considers himself Chinese.

On a fall afternoon four days before the test, as his cab wound its way south 500 kilometers along the length of the China-North Korea border, Zheng mused about China’s options for handling its neighbor, which he compared to a "misbehaving younger brother." He expressed doubts about the potential for defusing the conflict, especially via diplomacy. If the North Koreans he’s met on the Chinese side of the border are any indication, he said, "Whatever you give them, it’s never enough."

China, despite joining the international denunciation of North Korea, displays a calm reaction that may be informed by a deep understanding of an obstreperous old ally.

Lauren Keane is a Blakemore Freeman Fellow in Chinese language at Tsinghua University's IUP Center. A former Henry Luce Scholar at China's Caijing Magazine, she is currently a freelance journalist living in Beijing. Rights: © 2006 Yale Center for the Study of Globalization. YaleGlobal Online