No Respite For Narain

Under fire from team boss Colin Kolles for his lacklustre display at Monaco and Nurburgring, the rookie Indian fares no better as he is forced to retire in the 25th lap with suspension problems after losing control and brushing the wall. 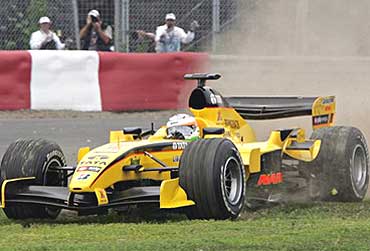 Narain Karthikeyan had to pay a heavy price for trying too much at the Gilles Villeneuve Circuit when he was forced to retire in the 25th lap of the Canadian Grand Prix with suspension problems after losing control and brushing the wall.

Earlier in the eighth lap, the 28-year-old Indian rookie, driving for Jordan, was lucky to survive a spin and he rejoined the race in last place.

Karthikeyan retired after experiencing brake problems and a slight contact with one of the famous Montreal walls of the track. Montreal makes the highest demand on brakes than any circuit on the calendar.

Brake stability and traction are important on this Montreal track as drivers do a lot of running close to the concrete walls on the back section of the Canadian circuit.

A resigned and calm Narain said after the race "I did not make such a bad start and the car was handling well. I had started in seventeenth position and was in sixteenth position on lap 5 as Rubens Barrichello (Ferrari) who had left from the pitlane passed me."

At the start of the race on lap 8, Karthikeyan had a hard time with the brakes coming into turn 2. The car spun, drove a little bit on the grass but maintained strongly and continued the race after spinning at turn 2.

Karthikeyan lost a little bit of time in the manoeuvre and Tiago Monteiro who was running behind him used the gap to pass him. He refuelled on the same lap than Jarno Trulli (Toyota) and Fernando Alonso (Renault) just ahead of Kimi Raikkonen (West McLaren Mercedes) and managed to retake his position after his first pit stop.

The track was very slippery at this point and there are lots of straights and chicanes that makes it hard on the brakes for all drivers. Even the leader Juan-Pablo Montoya (McLaren Mercedes) went wide on the grass and continued.

"Today, I have been the first of the drivers to experience a light contact with the dangerous Canadian concrete walls. Possibly it is the consequence of my brakes that did not fully perform. Anyway, I went slightly too wide in the dirt and clipped slightly the wall on lap 25 and had a similar adventure to Alonso's on 39th lap on turn 9 as he was the leader of the race," Karthikeyan said.

"Later on in the race, even the pole man Jenson Button (Bar Honda), who was running in third position for part of the race before, crashed in one of the walls short before the 48th lap. Anyway, just like them, I touched slightly first the back and then the front right wheel of the concrete wall.

"I hardly noticed the vibration and maintained the car on the track on lap 26. I thought I had a flat rear tyre and drove back carefully to the pit. The mechanics were ready and spotted that the damaged rim of the rear back tyre had to be replaced. But double checking the damage to the car, the team decide to push it back in the garage. What a shame, because I had a good lap time of 1.157.510 on lap 20. I had to watch the rest of the race from the pit-wall," Karthikeyan lamented.

Finland's Kimi Raikkonen (McLaren Mercedes) won after a very hard race. It is the third well deserved win of the season (after Spain and Monaco) and fifth win overall for the 25-year-old Finn born in Espoo.