As Harsha Bhogle wrote recently, 'Make no mistake, Pakistan have the men to win the series. Now whether they have the team to do so, I do not know. Nobody really does.' 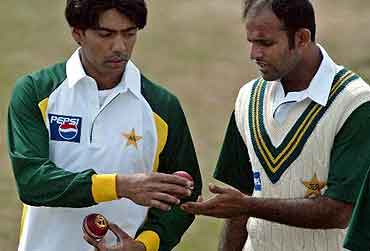 Mushtaq Mohammed became a folk hero in Pakistan when he led his team to a resounding victory over India when the two countries played in 1978 after a gap of about 16 years. In that series in Pakistan, India not only lost the matches, its fabled spin quartet was dismantled by the marauding Pakistani batsmen.

Surprisingly, Mushtaq lost the job and his place in the team for Pakistan’s return tour to India under Asif Iqbal. Still, we have to sit up and take notice of when he says that the Pakistan team that arrived yesterday is the weakest ever and resembles a club side.

As if to buttress his point, Mushtaq said that Indian captain Saurav Ganguly, upon learning of the make-up of the Pakistan squad, must have had a hearty laugh.

There are many former players and experts who share Mushtaq’s view, though in varying degrees, based primarily on this Pakistani team’s seemingly weak bowling attack.

One of the few dissenting voices is, expectedly, Inzamam-ul-Haq’s. The Pakistan skipper’s rationale is curious though, something to the effect that last year Pakistan lost a series at home and this was India’s turn to return the favour.

Now, Reverse Spin believes in cyclicality only with regard to the monsoon, and anti-incumbency only in politics. But Inzamam’s prediction, however perfunctory it may sound, may not be mere formality.

On paper, this Pakistan attack is weak. Danish Kaneria is the only bowler with a respectable strike rate (number of balls bowled per wicket) in Test matches of 60.7. The rest of the attack will hardly pick this statistic for an after-dinner talk. 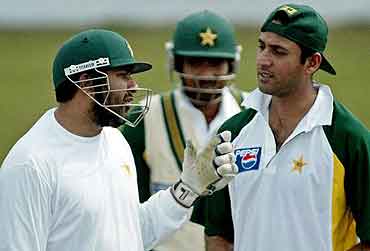 It is 76.05 for Abdur Razzaq, 76.20 for recalled off-spinner Arshad Khan, 81.06 for Mohammad Sami, 70.83 for Rana Naved-ul-Hasan, 71.67 for born-again leg spinner Shahid Afridi and 97.63 for under-the-chucking-cloud off-spinner Shoaib Malik. Mohammad Khalil went wicketless in his only Test so far. To put the numbers in perspective, Waqar Younis’ ended his career with a strike rate of 43.4.

However, individual brilliance flowers with alarming regularity when India and Pakistan play. Zaheer Abbas, Imran Khan, Wasim Akram, and Javed Miandad reserved their best for the old rival. When they last played in India in 1999, Saqlain Mushtaq bagged four consecutive five-wicket hauls and Afridi, a one-day specialist, came up with a scintillating 141 in the Chennai Test. Two tests later in Calcutta, Shoaib Akhtar announced himself to the world by taking out Rahul Dravid and Tendulkar off consecutive balls. Then there was Umar Gul at Lahore last year, turning in a match-winning performance with the ball, and Salman Butt spoiling BCCI’s 75th anniversary celebrations at the Eden Gardens with his bat.

Don’t be shocked if Mohammed Sami, whose pace is comparable to Shoaib’s, comes into his own. Rana swung the new ball viciously at good pace in Australia and will be itching to test himself against the Indian batting. Kaneria came of age in Australia. Away from the shadow of Shoaib, any or all of these could put their hands up to be counted.

In batting, Pakistan have been facing problems with the top order. But Butt scored a Test century in Australia, a certain stamp of quality. Yasir Hameed not so long ago was one of the most promising batsmen in the world. Younis Khan may produce his best yet to repay the selectors for making him the vice-captain. Inzamam and Yousuf Youhana are quite adept at changing the course of a match.

The lower order, especially, packs quite a huge punch. Shoaib Malik, Razzaq, Kamran Akmal and Afridi can very well tip the scales on a given day.

The Indian team, on the other hand, does give a very settled look, but that could be deceptive. Gautam Gambhir has a long way to go before becoming an automatic choice. Virender Sehwag, despite his eight hundreds, does not quite inspire confidence with the way he plays and misses and gets out to self-indulgent shots. The skipper himself is not exactly in the form of his life. Irfan Pathan is coming back from an injury, as is Sachin Tendulkar. Ashish Nehra is fit, at the moment. When it comes to his fitness, one has to take it one moment at a time. Lakshmipathy Balaji has recovered from his injury, but was struggling to keep his economy rate below six while bowling to second-string batsmen in the Challenger series.

Eventually, it may boil down to which one of the two elevens can gel better as a team. As Harsha Bhogle wrote recently, "Make no mistake, Pakistan have the men to win the series. Now whether they have the team to do so, I do not know. Nobody really does."

'Imran Was Desperate To Win The Series'