'No Change In Batting Approach'

'The record knock (380 against Zimbabwe) does not change things. It reinforces what I have been doing earlier -- batting to a plan' 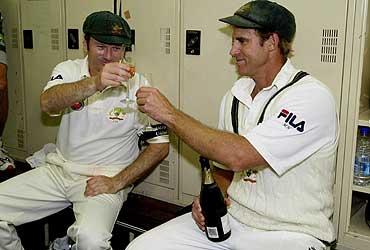 Record breaking Australian batsman Mathew Hayden said his best Test knock of 380 against Zimbabwe recently would not change his fundamental approach to batting.

"It (the record knock) does not change things. If anything, it reinforces what I have been doing earlier," said Hayden, who is part of the Australian team for the triangular series beginning today.

Hayden shattered the world record for the highest individual score in Test cricket with his 380 against Zimbabwe at Perth two weeks ago. The earlier best was 375 by West Indian Brian Lara, scored against England in Antigua in 1994-95.

Hayden said he would continue doing what he had done all along -- bat to a plan.

"I bat to a plan, and I would continue to do so as long as I can. The game is still the same," the Australian who would be celebrating his 32nd birthday on October 29, told reporters in the Capital.

Hayden had an ordinary debut in 1993 and was out of the national team after playing only six Tests until he made a grand return on the 2001 visit to India.

The muscular Hayden aggregated 510 runs on that three-Test series, and has since then gone on to establish himself as a prolific run getter with nearly 3500 runs including 15 hundreds from 33 matches at an average above 70.

Hayden said being on the sidelines for a long time was a strong reason for his amazing consistency in the last two years.

"I have been on the sidelines for a long period of time, watching people play and wanting desperately to play. That was a motivation, and to me motivation is something that comes from within. And then I love batting, to pad up and go out to bat is something I really enjoy doing and have done it since young. So it was combination of these two factors," he said.

The Aussie opener said mental toughness was all about performing to one's potential.

"For me the most challenging, like a carrot dangling in front, is to keep playing how best I can.

"One of the strengths in me is being competitive, and being in a competitive environment brings the best out in me," Hayden said.

He said there was minor difference between batting in Tests and one-day internationals.

"When I put my Test cricket hat on, I don't give one per cent of a chance to the bowler to get my wicket.  But in one-day cricket, that percentage becomes lower. You start taking the risks at the early stage of the game, simply to elevate the scoring rate.

"But your game does not change necessarily a great deal. Probably, in Test cricket you can reverse it (the trend) around (over a period of time)."

Hayden also threw light on planning ahead of a match. "Every team plays to its strength and plans about where the opposition is going to pose a threat.

"For instance, here the ball stops swinging early so it suits the teams to pick early wickets and then slow up the run rate by bowling slow bowlers. So you have to counter attack that phase of the game."

Hayden said the difference between playing in India and in other countries was in the pace at which runs were scored and not so much in the wicket conditions as normally believed.

"The fact is that you score lot of runs very quick here, the moment you pierce the inner field it is a four ... and the grounds are not that huge either.

"We saw in the West Indies series how the sides regularly made 300 and chased 300.

"The par score really is the difference here. In Australia 250 would be a great score, but here 350 would be the par score." Having said that, Hayden could not see why teams or individuals did not make big scores in the sub-continent.

"We saw the New Zealand-India series, and there were comments in the Press on how good the quality of the wickets were and still the scores were low.

"I think it reflects on the brand of cricket the two sides had decided to play. That does not suit our style of play. We like to play aggressively, get the game going and moving forward, that's our brand of cricket. So, I don't think there is any reason why there are low scores."

Hayden said he and his opening partner Adam Gilchrist would give his team a big score if they batted throughout the innings, but said "I have not thought about that (Gilchrist and himself batting till the end in a one-day match), it has not happened often before.

"But the reason why I think we would score a lot is not because we are better than any other player in the side but, as a batter, you could score quicker if you stay till the last ball than the one who comes in fresh."