The I&B ministry headed by Smriti Irani, on Monday framed new rules for journalists' accreditation, allowing regulatory bodies to assume a journalist accused of writing fake news to be guilty until proven innocent -- which goes against cardinal principles of justice. 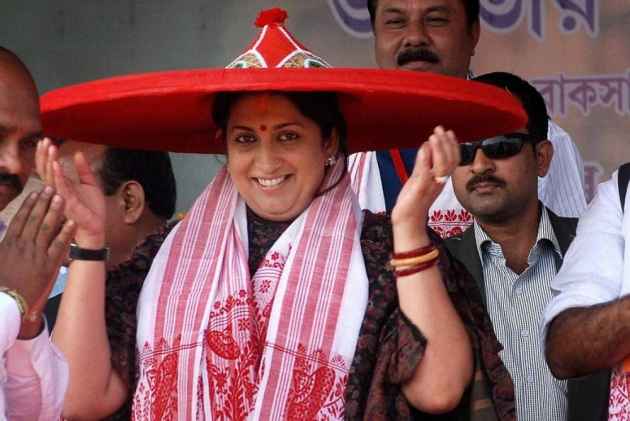 Congress leader Ahmed Patel today questioned the government's attempt to check fake news, asking whether it was aimed at preventing journalists from reporting news uncomfortable to the establishment.

He also asked who will determine if a reported news item is "fake" and expressed apprehension that rules might be misused to harass reporters.

Union minister Smriti Irani, however, responded to him saying the Press Council of India (PCI) and the News Broadcasters Association (NBA), both of which are not controlled by the government, will ascertain whether a news is fake or not.

“I appreciate the attempt to control fake news but few questions for my understanding: 1.What is guarantee that these rules will not be misused to harass honest reporters? 2. Who is going to decide what constitutes fake news ?

“3. Is it not possible that motivated complaints will be filed to suspend accreditation until enquiry is on? 4.What is guarantee that these guidelines will check fake news or is it an attempt to prevent genuine reporters from reporting news uncomfortable to establishment?,” Patel said on Twitter.

Responding to him, Irani tweeted back, saying, “Glad to see you awake Ahmed Patel ji. Whether a News article / broadcast is fake or not will be determined by PCI & NBA; both of whom I'm sure you know are not controlled/ operated by GOI”.

Earlier today, the government said the accreditation of a journalist could be permanently cancelled if the scribe is found generating or propagating fake news, as it came out with stringent measures to contain the menace.

The I&B ministry headed by Smriti Irani, on Monday framed new rules for journalists' accreditation, allowing regulatory bodies to assume a journalist accused of writing fake news to be guilty until proven innocent -- which goes against cardinal principles of justice.

In case of a third violation, his or her accreditation would be cancelled permanently, the information and broadcasting ministry said in a release.

It said any complaint of instances of fake news would be referred to the Press Council of India (PCI), if it pertains to print media, and to the News Broadcasters Association (NBA), if it relates to the electronic media, for determination of the news item being fake or not. This determination is expected to be completed within 15 days by these agencies, the ministry said.