The fast bowling bogey returned to haunt India as chasing 249 they were blown away by Andre Nel and Jacques Kallis for 91 from a mere 29.1 overs, their lowest ever score against South Africa. 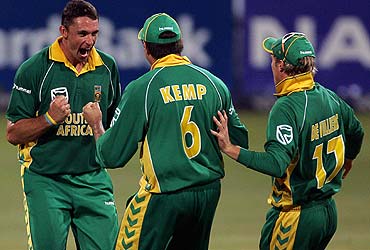 The fast bowling bogey returned to haunt India as they were razed down by South Africa's five-pronged pace attack in the second one-day international at the Kingsmead tonight.

Chasing a target of 249, India were blown away for 91 from a mere 29.1 overs, their lowest ever score against South Africa, and slumped to a 157-run loss, their biggest ever against the opponents.

Jacques Kallis set up the South African total of 248 for eight with an unbeaten 119 and then returned to capture three for three to complete a truly all-round performance.

But the man who did the most damage to the Indian batting was Andre Nel who returned an explosive, career best figures of four for 13.

As it were, only three Indian batsmen touched double digits and Sachin Tendulkar top scored with 35.

India's score was way below the 147 they had scored at Port Elizabeth in 1992-93 and the margin of defeat was also far worse than the 80-run margin they had suffered in Sharjah in 1996-97.

The statistics were a damning indictment of the gutless batting by the tourists who at one stage lost five wickets for only two runs from 28 balls as the bottom half really came apart under the lights.

However, what really took the light out of the Indian challenge was the dismissal of Tendulkar and captain Rahul Dravid (18) within a space of three balls that completely changed the complexion of the game.

The two looked in reasonable control during their 23-run third wicket stand before Dravid was bowled by a jaffa from Charles Langeveldt and then Tendulkar, from the other end, played Nel on to his stumps.

Still the dismantling of the lower half of the order was a nightmare for the visitors as a procession of batsmen trooped back into the hut within no time.

Young Suresh Raina (4) looked completely ill-equipped to handle the pace and bounce and was caught in the slip cordon after surviving a streaky shot in the same area.

Mahendra Singh Dhoni (14) hit two square driven fours before he failed to take his bat out of the harm's way and was caught behind off Nel. 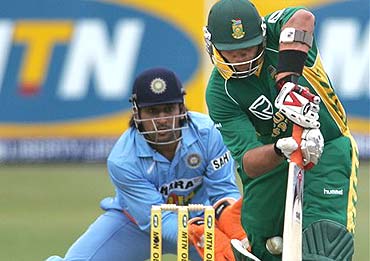 Kallis then got into the act by accounting for Dinesh Mongia (1) and Harbhajan Singh (1) and then the end didn't take long coming.

South Africa lead the five-match series 1-0 following the washed out first tie at Johannesburg on Sunday.

The next match is to be played at Cape Town on Nov 26.

The South African all-rounder almost carried his bat through the innings, walking to the crease in the second over and staying till the close to score his 14th one-day century from 160 balls with 15 fours.

This is his first century in 38 games and two years and only the first against India in 25th game against the particular opponents.

Kallis received valuable support from AB de Villiers (41) with whom he put on 78 runs for the fourth wicket and there was a brief assistance from Mark Boucher (23) but otherwise it was Kallis all the way.

The Indians though gave a good account of themselves with the limited bowling options they had, the bowlers bowling outside to a packed offside field and the part-time trundlers rising to the occasion.

India had chosen the treacherous option of going into the game with four frontline bowlers on a wicket which everyone believed would have a fair lift for the faster men.

In the event, the bowlers stuck to their task gamely, none better than old warhorse Zaheer Khan who marked his return to international cricket with two early wickets.

Tendulkar tested his shoulder productively, bowling his nine overs for only 33 runs.

Kallis was completely unaffected by the early loss of wickets. His square and cover drives off the medium-pacers were breathtaking and when Ajit Agarkar pitched it short, he hooked with no less command to convey his wide range of strokes.