On his last day of campaigning in poll-bound Karnataka, Prime Minister Narendra Modi today re-opened the imaginary pages of history to condemn the Congress party for allegedly showing disrespect to revolutionary leader Bhagat Singh in 1929.

Hinting at Rahul Gandhi's meeting with Lalu Prasad Yadav, who has been convicted in several fodder scam cases, the PM said Congress leaders have the time to meet corrupt people but had no time to meet jailed freedom fighters arrested by the British authorities.

"When freedom fighters like Bhagat Singh, Batukeshwar Dutt were jailed while fighting for our independence, did any Congress leader go to meet them? But the Congress leaders have the time to meet people who're corrupt and have been jailed," news agency ANI quoted him as saying. 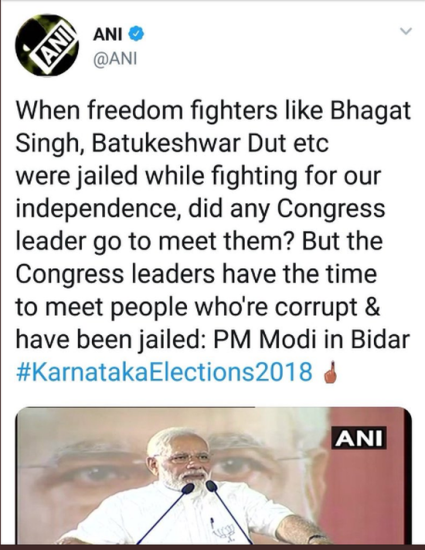 Historian S. Irfan Habib, who has also authored a book on Bhagat Singh To Make the Deaf Hear: Ideology and Programme of Bhagat Singh and His Comrades,  countered the Prime Minister's claim that no Congress leader visited the revolutionary leader while in jail.

Go and read history before misusing it for politics. Nehru not only met them in prison but also wrote about them. Several Congress leaders defied Gandhi to speak for them. https://t.co/IMr2vTpSnW

"Go and read history before misusing it for politics. Nehru not only met them in prison but also wrote about them. Several Congress leaders defied Gandhi to speak for them," he said today.

In April 1929, Bhagat Singh and Batukeshwar Dutt exploded two improvised bombs inside the Central Legislative Assembly in Delhi. They were subsequently arrested and put behind bars. Singh, along with comrades Sukhdev and  Rajguru was re-arrested in connection with the murder of police officer John P Saunders, and hatching a conspiracy against the colonial government.

The young revolutionaries were fasting in the jail to demand dignified treatment to them. Hailing their ‘magnificent suffering’, Nehru said that they had created a “new consciousness of political life ( that) once more made us all yearn for the liberty of our country....what a contrast this is , compared with the unfortunate wrangles among congressmen and the fighting for securing positions in the congress and the reception committee!”

Nehru, though ideologically opposed to Singh, acknowledged his struggle for independence.

"I was very much pained to see the distress of the heroes. They have staked their lives in this struggle. They want that political prisoners should be treated as political prisoners. I am quite hopeful that their sacrifice would be crowned with success," he had said.

In his autobiography, Nehru writes about Singh, "It is well to appreciate this, for only so can we have some understanding of subsequent events, of the phenomenon of Bhagat Singh, and of his sudden and amazing popularity of North India... Bhagat Singh thus did not become popular because of his act of terrorism, but because he seemed to vindicate, for the moment, the honour of Lala Lajpat Rai, and through him of the nation. He became a symbol; the act was forgotten, the symbol remained, and within few months each town and village of Punjab, and to a lesser extent in the rest of northern India, resounded with his name. Innumerable songs grew up about him, and the popularity that the man achieved was something amazing.”

Despite his support to Bhagat Singh's struggle for independence, Jawaharlal Nehru and the Congress party categorically rejected his actions.

Speaking in the historic Karachi session of the Congress on March 29, 1931, Nehru had said, “Ours is not the Bhagat Singh way” because the method he adopted, “will ruin the country".