My midget-muzzled Madrasi submission to snouty Delhi: "You're bearable, even great fun. As long as I can cock my snook at you."

Pretty girls get looked at a lot, especially when they're wearing clothes apparently made from handkerchief-sized bits of fabric. But late one night at Climax, Delhi's hip new night club, no-one was looking at my gorgeous companions. A group of very young men walked past us to the bar, which had just stopped serving alcohol. "Dhik-chik boys," I muttered to my friends. They nodded, instantly identifying the demographic: young men cruising the streets in Daddy's Skoda, pumping out music of much volume and trifling taste. 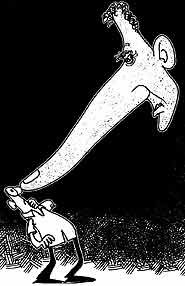 "What d'you mean you're not serving us, huh? B**** C***, I want my drinks now!" Even by Delhi's rough standards of address, this was extreme. We'd heard too many stories of gun-happy drunks and fled, shamelessly. Back in my car, I had my own alcohol-fuelled epiphany. I have come back to live in Delhi several times, after longish stints in Bombay and Calcutta. Each time, I was struck by two things. Getting served in a Delhi bar still requires the sort of slavering-pigs-at-the-trough aggression that most other cultures would label as sociopathic. And when you arrive in Delhi from any other Indian metro, there is the singular salience of people noses. People in Delhi are far better endowed in the snout department than anyone from, say, Bangalore or Madras.

Surely the snoutiness and the aggro were related. The guys at the bar were certainly equipped to Hoover their drinks, had they been served. Pseudoscience, science and literature seem to come out in my favour. Face readers have long correlated large noses with potent abilities, both sexual and financial.

Big noses in the animal kingdom evolved as hereditary traits. A massive honker on a male proboscis monkey helps him score with the females, as it does with elephant seals. Likewise, long-nosed human parents are more likely to produce snouty sprogs.

Some scientists reckon that big human noses evolved because long nasal passages were needed to suitably filter, warm and moisten air as it is inhaled. Equally, warm and wet conditions wouldn't reward a long nose, so schnozzy southies are rare.

Studies show that a prominent nose, along with other "masculine" features like a square jaw, is linked to high testosterone levels, which also influence aggression, and this may explain why small-nosed people like me find a stout sniffer intimidating. The philosopher Pierre Bourdieu was probably not thinking of Delhi's general beakiness when he introduced his concept of symbolic violence, which describes the power exercised on a social agent like me—with my complicity, but he may well have done so under suitably absurdist conditions.

In Delhi, this essentially means that my social interactions are forever afflicted by a mild case of terror by nose-envy. Luckily there is a saving grace. As cartoonists have always known, the nose is the one body part that can simultaneously communicate power and invite mirth. Hence my midget-muzzled Madrasi submission to snouty Delhi: "You're bearable, even great fun. As long as I can cock my snook at you."