My Protest Has Fallen On Deaf Ears: Irom Sharmila 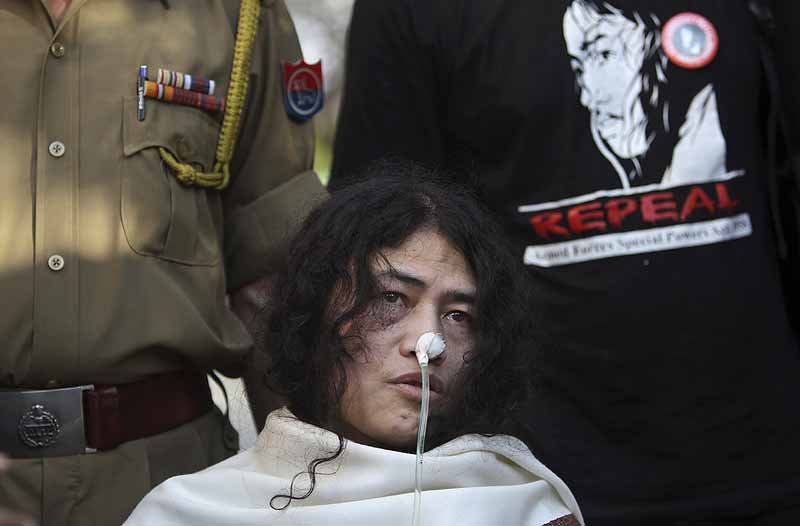 “My fight is not just against AFSPA (Armed Forces Special Powers Act). It's to establish the fact that we (people from India’s North- East) live on the same planet,” said Irom Chanu Sharmila, the iconic Manipuri civil rights’ activist, here on Sunday.

In August this year, Sharmila broke her 16-year long hunger strike demanding the revocation of the draconian AFSPA. The 44-year old activist is considered to be a symbol of resistance against the 'state violence' in conflict-torn North-Eastern state of Manipur. Sharmila started the hunger strike in November 2000 after the Malom massacre in a small village on the outskirts of Imphal, in which 10 people were reportedly killed by a government-controlled paramilitary force, the Assam Rifles.

While addressing over 1000 people packed in a small ground of Jawaharlal Nehru University here, she highlighted the importance of youth and united peoples’ movement for fighting the ‘state's repression’.

“Today, I feel emboldened. I urge the youth to take the fight forward and join the struggle; I ask for your help to take power back in the hands of the people,” she said while ruing over the lack of support back home.

“For 16 long years I had been on a fast following Gandhi’s principle of Stayagraha, of silent protest hoping for a democratic solution to the problem. But my protest has fallen on deaf ears. It has been defeated and discarded! Now I express a different will, will to take it to the ballots,” asserted Sharmila as she stated the reason behind her choice to become a part of the political system and run for the elections.

Lawyer-activist Vrinda Grover, who too was present at the event, called for repealing the colonial law of AFSPA. “Laws like AFSPA, sedition have colonial roots and needs to be amended urgently. It only encourages impunity and leads to repression.”

Despite linguistic constraints and after changing two interpreters, Sharmila went on to share her insights on the Manipuri form of resistance and the need to take part in active politics. “When the law that was meant for we the people turns against us, why should we remain content with the situation. The whole mode of politics needs to be modified. Constitution needs to be amended to make India a multicultural, multilingual and multi-religious country,” she said.

Why The Attack On Baramulla Army Camp Is Surprising?