I want to remember my father this father's day as I would hope my own two do after I'm long gone... 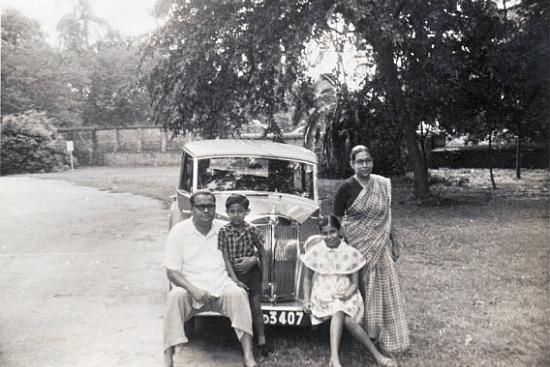 I fear that I'm losing whatever's left of my memories of my dad. I relied so heavily on "documents" to establish what I wanted to present about my dad to the world, that each misplacement and loss of a document would make me sadder, angrier (at whom?) and more anxious.

Six months after he died in June 1983 at age 65, I'd shipped trunk loads of photo albums, huge stacks of press clippings, letters, invitations that he'd stowed away. These were the documents of "his life." Passports, menus from restaurants, ship manifests, photographs, receipts from international hotels and clubs. These trunks came by container ship to the Brooklyn Navy Yards, where I was to pick them up.

I lived in Brooklyn then and with my now ex-wife I drove our battered 1966 Ford Rambler down to the docks to retrieve the cargo. We entered, what was miserably familiar to me, the land of corruption and more corruption. In India, I would know how to deal with that — outsource the handling of the corruption to someone better equipped to deal with it. Here, in the "civilised" West, I was at the mercy of the dockyard goons. Every inch of the way, from identification of the cargo to the release of it and into the car, was paid for by measly wages I made as a production editor at St. Martin's Press and by ex-wife's then-formidable salary at New York University!

For years, I enjoyed hours and hours of going through these piles of stuff. I discovered his public life in detail and tracked the inconsistencies of his telling of that life to us when we were growing up with my hawkeye-historian's ability to sequence events! Was I then the keeper of my father's story? He was no longer available to tell his own or defend and clarify what I was threading together.

In 1991, after my separation and eventual divorce, I left Brooklyn and New York and moved to Boston. We lived off Inman Square on the Cambridge-Somerville line — Beacon Street. The company that had hired me in Boston paid for the movers, who were supremely efficient. They bagged, boxed and wrapped an entire floor of a Brooklyn apartment in hours and stashed it into a gigantic moving truck. That included the garbage of the day in the apartment.

The movers boxed the papers and stuff that I'd bribed out of the Brooklyn Navy Yard and sent them off to Inman Square. Months after we'd settled into place in Somerville, I realised that I'd probably tossed some of these boxes out by mistake. I have no idea how. It happened. They are not with me anymore. I have flickering images of some of the contents, fading by the decades.

Recently, I wanted to find a piece that I'd written about my childhood and growing up with my dad for an Indian magazine called Imprint.

I know I have the copies somewhere in our sprawling house but I couldn't find it. Not yet. So, I'm stuck with having to write about the past, in the present, anew. Not copied. Writing about what I'd often thought was a charged and often tormented relationship.

And so I start, writing, in the moment, about that past, with all our (my dad's and my) histories together and the histories of my two sons lacing my own. I'd hesitated to write before 'cause my pride and ego made the endeavor larger than going to the moon. It had to be the all-encompassing understanding of our lives together.

But this Father's Day, I know better. This Father's Day, I don't want to read what Helen Keller wrote about him, or Madame Chiang Kai-shek or Jawaharlal Nehru. This Father's Day, I want to read what I remember of him (all that and what else?). I want to remember my father this father's day as I would hope my own two do after I'm long gone — he had a great throwing arm till his 40s; he loved coffee more than wine (true now!); he loved the etymology of names; he only watched the Bruins during playoffs; he ranted at politicians, especially Republicans, at every given opportunity; that he was loyal, cried at the movies, and for some unknown reason maintained that "Lawrence of Arabia" was a GREAT film.

I know this Father's Day, the essential legacy of his life for me — that he loved me as much as I love my own two sons and that he wanted me to have the best of everything he could provide as much as I do for my own two and that sometimes he acted like a raving lunatic, frightening me same as I probably have done in my own life. This Father's Day I know that I'd hug him like I never did in real life.

Amit Shah, a graduate of St. Stephen’s College, is a publishing executive in the U.S. and has two sons and lives in Somerville, MA.

How Do You Solve A Problem Like TM Krishna?