'My Best Is Yet To Come'

One of the few bright spots during India's dismal tour of South Africa, the Kerala seamer may have emerged as the new pace spearhead, but the 23-year-old reveals he has more plans -- improving his batting and becoming an all-rounder. 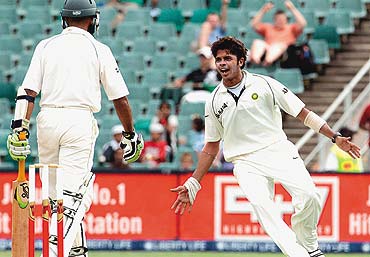 One of the few successes on India's disastrous tour of South Africa, S Sreesanth says his best is yet to come.

The 23-year-old Kerala paceman began as a leg-spinner and has now emerged as a spearhead of the Indian pace attack. But he has more plans -- improving his batting and becoming an all-rounder.

"My best is yet to come. I hope I would be able to live upto the expectations of the people. I need everyone's blessings," he said in an interview in Kochi.

The Kerala bowler acknowledges that every outing in India colours has helped him mature as a bowler, only the second player to make it to top flight cricket from the state.

"My goal is to see India win. We want to win each and every game," he said.

Sreesanth is aware that only a consistent performance will help him cement his place in the national team.

"If I do well I will be in the team and if I don't do well, I will be out, I am sure about it. I am ready for setbacks. I am always realistic. I am not in a dream world."

Sreesanth, who earned all-round praise for his show in South Africa, is not willing to rest on his laurels.

"I am a learner, I am still learning. I will not take things for granted. I have to really do well. I have to do regular practice then only I can be confident of performing well in the next game," said Sreesanth who finished with 18 wickets from three Tests, equalling Anil Kumble and Javagal Srinath's record in South Africa.

"My dream was to capture 25 wickets in the series. But I thank God that I could get 18 wickets and equal Kumble and Srinath. They are legends in Indian cricket and to hold the record along with them is a great feeling."

Sreesanth acknowledged that seniors played a big role in shaping his career and the time spent in the dressing room had been a huge learning experience.

"I am really lucky to have played alongside seniors like Sachin bhai, Rahul bhai, Anil bhai, Sourav bhai and Laxman. They are all very nice. During my setbacks they gave me lot of encouragement.

"All my teammates and coach Greg Chappell are very cooperative. From my debut match in Nagpur (last year), I have been getting a lot of support from the seniors," he said.

The team man that he is, Sreesanth is now keen to improve his batting skills and chip in with useful contributions lower down the order.

"I will not say that I want to concentrate on my bowling alone, like others. I can surely become a good all-rounder," he said.

Looking back at the tour of South Africa where the Indians lost both the one-day and Test series, he said, "It is not always easy to perform well outside the country and especially in South African conditions. We tried our best but maybe in some points we were not good enough."

On his prospects of making it to the World Cup team, he said, "I stand a good chance. I hope to be a part of it."

Interestingly, Sreesanth grew up idolising Sunil Gavaskar and Tendulkar and started as a leg spinner and an opening batsman before switching to pace bowling.

"My brother Deepu was also a cricketer and he used to talk about Gavaskar when I was a small kid. From that time onwards I started admiring Gavaskar.

"I am still learning, I have to bowl with more intensity. India will play a few ODIs against West Indies and Sri Lanka before the World Cup and I want to make the most of it," said the bowler who has 29 wickets from 22 ODIs.

Sreesanth rates Brian Lara's wicket as his most prized scalp among the 37 Test wickets he has captured from eight Test matches at an average of 25.97 and an economy rate of 3.37.

"Every batsman to whom I have bowled has been very tough (but) I rate Lara's wicket as most precious I have taken in my career so far. Of course, all the 37 wickets are good as they have been taken in international matches."

On returning his best bowling figures of 5 for 40 in the historic Johannesburg Test which India won by 123 runs, he said "it should have been something like 5 for 27 but I gave away some extra runs".

Sreesanth said he was not disappointed at missing out on the man of the series award. "Till the second Test at Durban I had hope. Had the third Test ended in a draw, I might have got the honour. But I am not disappointed. It encourages me to do better next time."

Sreesanth's message to aspiring fast bowlers is simple: "Work hard without expecting something in return. Always be patient, believe in yourself and dream high. One day the hard work will pay dividend."