Is Muslim morality inimical to the promotion of music and other fine arts? The story of the early Arab Muslim society shows that the Caliphs and the commoner were not only fond of poetry and music but actively patronised them. 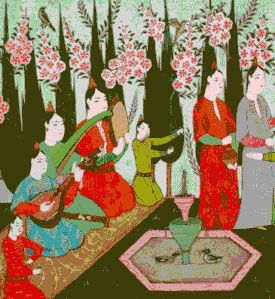 The zeitgeist of the contemporary Arab societies has led many people to believe that Muslim morality is inimical to the promotion of music and other fine arts. This may be true today, but the story of the early Arab Muslim society till the Mongol invasion of 1256 is quite different. The Caliphs and the commoner were not only fond of poetry and music but actively patronised them.

The history of poetry and music has been elaborately recorded by Abu Al Faraj al-Isfahani (897-966) in his famous classic known as Kitab al-Aghani (Book of Songs). This book is considered a veritable resource of detailed description of the origins, chronology and wide diffusion of Arabic music, musicians and singers of the time. He describes the scenes and songs vividly and objectively. He gives not only the names of the poet and composer but also the type of song, its rhythm and the music they played. The review of the artists is based on the classic standards of Ishak Al Mousuli, great master, who established the first musical school in Baghdad during the reign of Harun Rashid. This school produced many prominent musicians including Zuryiab, who moved to Spain, and established his own school there.

According to Ibn Khaldun, the Cordovan Caliph Hakam, himself a man of letters, had sent a large sum of money to Isfahani to ensure that he gets first copy of the book. What is remarkable about the book is that almost on every page it mentions women singers who were found singing cheerful songs in the taverns (cafes of today) or in the places of amusement, at feasts and celebrations, or singing lamentation at funerals. Isfahani himself has relied on a study by Abdullah bin Motazz about the songs of Oreib and Sheria, women musicians.

There are many interesting anecdotes in the book that make Aghani a fascinating reading but the stories of Azza al-Maila and Jamila, the most famous singers of the period, deserve special mention.

Azza Al Maila is described as a slave girl of captivating beauty, graceful conversation and great style of expression. She started her career by learning songs of old school of women-singers Zarnab, Khola, Rebab, Selma and Raika. Later she became proficient in the Persian style of singing brought to Medina by the male-singers Saib Khater and Nashet, and composed her own songs. Her performance was divine, and her voice rich and extensive. She is credited as being the one who interested the public of Medina in music.

Jamila an accomplished Arabic singer was acclaimed as the ‘Queen of Songs’ and ‘keystone of Arabic Art’. Ibn Sureij and Mabed were her disciples. She was so proficient that once after hearing a tune of Saib Khater, she composed a new song that won more popular applause than the original. She opened a singing school in Medina, and during pilgrimage it was a custom of many masters to send their slaves to her for instructions. 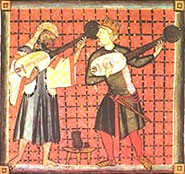 Jamila was a slave girl. After securing her freedom, she invited people to her house one day and, when the place was full, announced that because of her religious beliefs and nightmares she had, she has decided to give up singing. The announcement resulted in great commotion until a doctor of laws declared that singing was a legitimate pleasure. Then Jamila sang and when she finished, the applauding people were heard asking God that not to deprive them of her music.

The patronage of nobility had not only put the mark of respectability, but actively promoted poetry, music and other fine arts in early Arab Muslim Society.