The bench on Tuesday had taken up a plea by Bharatiya Janata Party leader Subramanian Swamy for a speedy outcome. 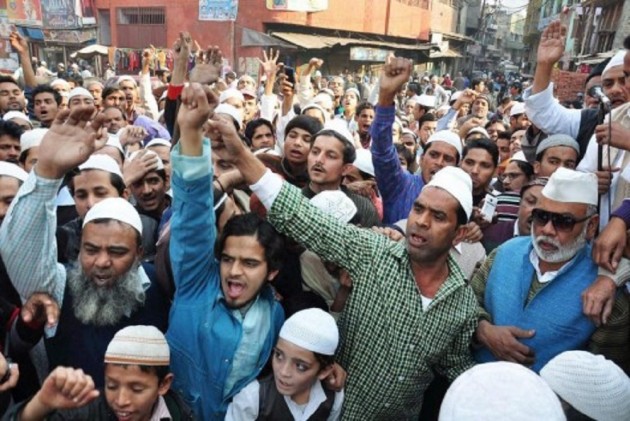 Muslim organisations have said they were unconvinced about fresh negotiations in the Babri Masjid demolition case in Ayodhya, as has been suggested by the Supreme Court.

A bench led by Supreme Court chief justice JS Khehar had said litigants in the decades-old dispute, a seminal event in Indian politics and a flashpoint between Hindus and Muslims, should try to settle the matter outside the court through talks.

The bench on Tuesday had taken up a plea by Bharatiya Janata Party leader Subramanian Swamy for a speedy outcome.

“What is the point and where is the scope for negotiations at this point? Please understand that the court had made an oral observation. The case was filed in the first place only because long negotiations had failed,” Zafaryab Jilani, the convenor of the Babri Masjid Action Committee, told the Outlook.

Jilani, a lawyer, has pleaded the main case at various points.

In December 1992, Hindu activists, part of a movement launched by the BJP, pulled down the 16th-century mosque in Ayodhya despite prohibitory orders, leading to sectarian violence in many parts of the country. Hindus believe the site of the mosque is the birthplace of Lord Ram, the widely revered Hindu God.

Jilani said the chief justice’s remarks, calling for a settlement, did not constitute anything binding.

“The honourable court may not be aware of the exact details of long negotiations we had. So, it made this oral suggestion. That’s ok. But we don’t see any point.”

Jilani said the court had powers under section 89 of the Code of Civil Procedure to call for a settlement only if the parties agreed. “That has happened before in Allahabad high court, there was no agreement.”

In 2010, the Allahabad High Court had delivered a verdict in the case, carving up the disputed plot among the litigants. This was challenged by Muslims in the Supreme Court.

“Negotiations have been disastrous because of the stand of VHP with regard to the fundamental position of the Vishwa Hindu Parishad that Muslims accept that the site is the birthplace of Lord Ram. When you put this precondition, can there be negotiations?” Navaid Hamid, the leader of Mushwarat, a well-known Muslim body said. “My broad position is negotiations only without any precondition.”

A movement to build a Hindu temple at the site of the Babri Masjid took the shape of a powerful political agitation that catapulted the BJP to power. In the recent manifesto for the UP elections, the party reiterated its commitment to build the temple within the “Constitution’s framework”.

Negotiations for an amicable solution date back to a period before the mosque’s actual destruction. The first attempt was made in 1986 with the Shankaracharya of Kanchi Peetham, a Hindu monastic order, as mediator. It was facilitated also by former vice-president of India Krishna Kant. A second round of talks took place in 1990, when Chandra Shekhar was prime minister. A third attempt at resolving the issue happened in October 1992. Then, former president of India R. Venkataraman (who had by then demitted office) had gone to see Mujahidul Islam, the president of All-India Muslim Personal Law Board, at his home to see if talks could be started again. But with a peaking movement for a Ram temple, the talks never took off.

In 2003, Muslim law Board’s Rabe Nadvi sought a written proposal from the VHP for the negotiations. “They said we must give up claims for three other mosques, apart from Babri,” Nadvi said.

A cross-section of Muslim leaders said the court should simply decide the matter and hand a verdict. “The Supreme Court’s job is not to give political suggestions. We expect it to see things in the light of law and settle the title,” Zafarul Islam Khan, the editor of Milli Gazette said.

Zakat Foundation chief Syed Zafar Mahmood, who served on the Sachar committee, a panel constituted by former PM Manmohan Singh to look into Muslim deprivation, said his organization has proposed a list of political demands to accept the demand for vacating the claim for a temple. These include de-reservation of SC constituencies in favour of Muslims and a proportionate share of Muslims in all levels of government jobs.

Currently, there are eight appeals pending, five representing Muslims, three from Hindus. There are 20 parties in all. The main litigants seeking a temple at the site are Bhagwan Shri Ram Lalla “through its next best friend” – a legal jargon for its representative -- Rajinder Singh, Nirmohi Akhara and the Hindu Mahasabha.

The Muslim parties include the Sunni Wakf Boad, Hashim Ansari – dead and represenated now by his son Iqbal Ansari --Hafiz Siddique, who is no more, Ashhad Rashidi , Maulana Mehfuzur Rahman, Misbauddin from Faizabad and Farooq Ahmed from Ayodhya, also dead.