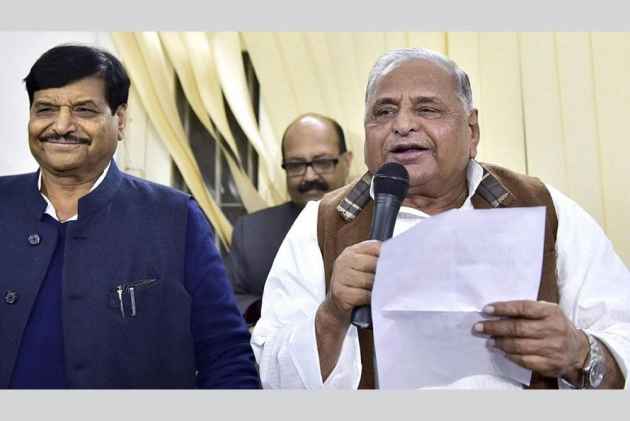 Samajwadi Party patron Mulayam Singh Yadav and his brother Shivpal Yadav are likely to work for the formation of a secular front under the banner of Lokdal, according to Lokdal National President Sunil Singh.

Fresh strains are palpable in the Samajwadi Party ahead of its state and national convention, with Mulayam yesterday dumping Akhilesh-loyalist Ram Gopal Yadav from the post of secretary of the Lohia Trust and appointing Shivpal Yadav in his place.

"Netaji (Mulayam), who is also founder member of the Lokdal, and Shivpal will be with us and work for formation of a secular front. They will hold a joint press conference with us on Monday," the Lokdal National President told PTI today.

"I have had talks with Shivpalji and initially efforts will be for formation of a secular front under the banner of Lokdal," Singh claimed.

Singh's statement assumes significance against the backdrop of Shivpal's announcement in June that he would float the Samajwadi Secular Front "to fight communal forces".

"As there is no sign of any truce in the Samajwadi Party, it is a crucial time for Shivpal to decide his future course," a close confidant of Shivpal said.

When asked about Singh's claims that Mulayam and Shivpal will work under the banner of Lokdal, another Shivpal loyalist said, "Mulayam may not like to shun the 'Samajwadi' tag. The situation will be clear on Monday when netaji will disclose his future course of action."

He, however, hastened to add that it would not be surprising if Mulayam takes some other decision and cancels his scheduled media interaction.

Lok Dal has the old election symbol of 'farmer ploughing field (khet jot ta kissan)', on which Charan Singh had become the chief minister of UP.

Mulayam, who was opposed to the SP-Congress alliance during the 2017 Assembly elections, was offered party symbol and president's post in Lokdal by Sunil Singh.

"A number of Shivpal loyalists had contested on Lokdal ticket during the assembly polls and the party used Mulayam's photographs for campaign, terming him as true samajwadi (socialist)," the Lokdal President said.

The SP is holding its state convention on September 23 in Lucknow while its national convention is scheduled on October 5 in Agra.

While Shivpal is not invited to both the meetings, Mulayam is also unlikely to attend them.

"I have not received the invitation so far and I am unlikely to attend them," Shivpal said

On his future course of action Shivpal had yesterday said, "Netaji (Mulayam) will be disclosing it on September 25. He will make some announcements."

He, however, did not elaborate, leaving mediapersons wondering as to whether the party patriarch will part ways with the SP and announce a front, reports about which were doing the rounds in the political circles.

During the initial stages of the Yadav family feud, Akhilesh had created another trust, the Janeshwar Mishra Trust, housed adjacent to the Lohia Trust.

Akhilesh is the chairperson of the Janeshwar Mishra Trust.

The Yadav family feud came to the fore about a year ago and climaxed in Akhilesh snatching the mantle of the SP national president from his father at an emergency national convention of the party here on January 1.

Taking full control of the ruling party after being crowned as its head and after being alloted 'bicycle' symbol by the EC on January 16, Akhilesh has been going whole hog consolidating his grip over the party.