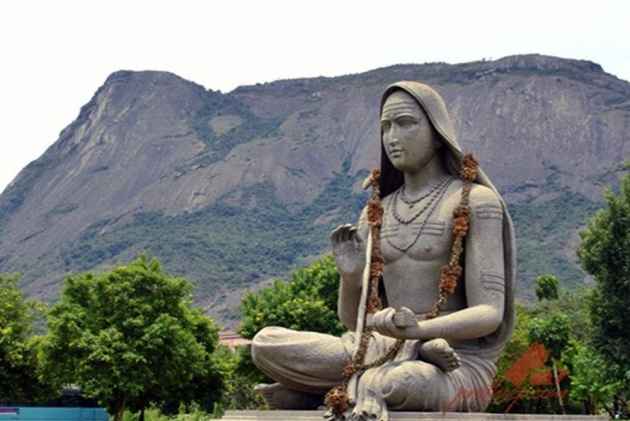 The Madhya Pradesh government is planning to take out an 'ekatm yatra' for the collection of metal pieces to install a 108-feet tall statue of Adi Shankaracharya at Omkareshwar in the state's Khandwa district.

The statue of the saint is proposed to be set up on the banks of river Narmada in the famous temple town of Omkareshwar, located around 290 kms from Bhopal. It houses one of the 12 revered 'jyotirlinga' shrines of Lord Shiva.

"The state government has decided to take out an awareness campaign, named 'ekatm yatra', in December-January to collect the metal pieces for making the statue of Adi Shankaracharya at Omkareshwar," an official of the state public relations department said.

A state-level organising committee of 98 members, including religious leaders, ministers, chairpersons of various boards and corporations, elected representatives, administrative officers, experts and educationists, has been set up to conduct the yatra effectively, he said.

While addressing the 'Namami Devi Narmade-Sewa Yatra' at Amarkantak in the state in February this year, Chief Minister Shivraj Singh Chouhan had announced to install the grand statue of Adi Shankaracharya at Omkareshwar.

"It was in Omkareshwar that the young Shankara met his guru Govinda Bhagavatpada in a cave and attained highest spiritual elevation. He founded the four 'math' (monasteries), which helped in the historical development, revival and spread of Advaita Vedanta," Chouhan had then said.

He had also announced to set up an institute of eminence at Omkareshwar in the memory of Adi Shankaracharya and introduce a course on him in the school syllabus.