Gohar Ayub Khan evidently has three objectives in mind: to discredit the highly respected Indian army, to restore the "image" of his dictator father and, of course, sensationalism gets more money for writers. 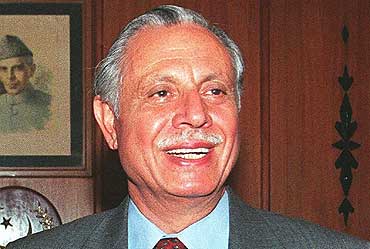 Pakistan's first military usurper and self-proclaimed Field Marshal, Ayub Khan, often boasted that one Pakistani soldier was more than a match for ten of his Indian counterparts. This myth was shattered when Pakistan chose to initiate conflict with India in 1965 and found that even though the Pakistan army was much better armed and equipped than its Indian counterpart, its offensives in Kashmir and on the plains of Punjab were beaten back..

Many eminent Pakistanis like Air Marshal Nur Khan, Ayub's biographer Altaf Gauhar and the then Army Chief General Musa have since acknowledged that the 1965 conflict was based on wrong assumptions, failed to achieve any of its objectives and ultimately led to the downfall of Ayub himself. Ayub's son Gohar Ayub Khan, who as Pakistan's Foreign Minister was noted for his viciously anti-Indian attitude, has now come up with a cock and bull story alleging that India's "Order of Battle" was revealed to Pakistan by a Brigadier in the Indian Directorate of Military Operations. He has asserted that the Brigadier who allegedly wanted money for his wife's business interests, provided this information to Pakistan in return for a payment of a meagre sum of Rs. 20,000 that was made in London..

Gohar Ayub Khan evidently has three objectives in mind. Firstly, to discredit the highly respected Indian army whose officers don't spend their careers making money selling Cantonment lands, or peddling heroin. Secondly, to restore the "image" of his father who is reviled in Pakistan today as a dictator who presided over the disastrous military adventure in 1965. Finally, sensationalism gets more money for writers. By claiming that his father knew in advance of India's military plans, Gohar Ayub only confirms that his father was an incompetent military leader, who could not win a battle even after being forewarned of enemy plans and intentions.

Having participated in the 1965 conflict and entered Pakistan in the Sialkot Sector, I can personally assert that the Pakistan army had no clue of where our only Armoured Division was going to strike across the border. This would not have happened if, as Gohar, claims his father was fully aware of our plans. Similarly, in the Lahore sector Lt. General Harbaksh Singh was well prepared to flood the entry areas to halt Pakistan's armoured thrust. Khem Karan was ultimately the graveyard of Pakistan's much vaunted Armoured Division. Dozens of new American supplied Patton tanks were either abandoned or destroyed by Indian soldiers who were equipped with much less advanced tanks and equipment.

The officers who served as Director of Military operations in that period (1964-65) were Brigadiers D.K. Palit, R.S. Noronha, N.C. Rawlley and Narendra Singh. They were persons of exceptional integrity. No spouse of these officers was involved in "canning fruits and vegetables," as Gohar Ayub claims. Gohar Ayub himself brought disrepute to his father by his passion for dubious commercial deals. Pakistan's Military Attaches who head their intelligence set up in Delhi are often fed with wrong information and send unsubstantiated reports from New Delhi. There have been instances, for example, when ridiculous reports have been sent that Israeli aircraft based in India are all set to attack Pakistan's nuclear establishments.

A former Pakistan Military Attaché Brigadier Zaheer ul Islam Abbassi was entrapped in a classical "Sting Operation" by Indian intelligence, when he was all set to receive what he believed was the Indian Army's Order of Battle in 1988. Given the total failure of the Pakistan army in 1965 to take advantage of its vastly superior armaments, generously supplied by the Americans, it is entirely possible that Ayub was fed similar disinformation that led to his historic blunders.

The timing of Gohar's allegations is interesting. His "revelations" come when senior officers of the Pakistan army are being accused of perpetrating huge frauds on sale of cantonment lands in Lahore and elsewhere and forcibly occupying farmlands in Okara, evicting tenant farmers. Officers and men in the army are facing Courts Martial for refusing to fight in Waziristan and even participating in attempts to assassinate their Army Chief. Is Gohar Ayub attempting to divert attention from the impact of the Kargil fiasco and subsequent developments within Pakistan?

G. Parthasarathy is a former Indian High Commissioner to Pakistan.