Method In The Madness?

India seems to have acted on a favourable world opinion and Musharraf's desperation to win international support. 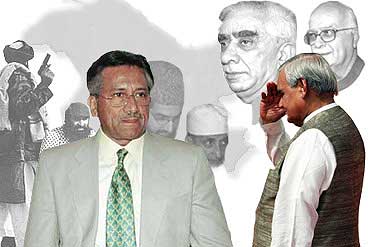 outlookindia.com
-0001-11-30T00:00:00+05:53
Even a week after Prime Minister Vajpayee extended an invitation to Pakistan to India, there is much confusion over the Government of India's decision to lay out the red carpet for Pakistan's CEO Pervez Musharraf, barely two years after he tried to uphold the squatter's rights in Kargil. Kargil was a personal betrayal for Prime Minister Vajpayee, who invested considerable political energy in taking the bus to Lahore and signing a declaration replete with the usual good intents and promises, which, in the Indo-Pak context, means only one thing -- they are not worth the paper they are written on.

Kargil was yet another tired reminder of its claims to Kashmir, though it is another matter that our much-vaunted Army allowed Pakistani regulars and irregulars to build a whole mountain township in our territories, unnoticed by anybody, except towards the end by a shepherd boy. Vajpayee said he had been stabbed in the back.

Most security experts thought the Kargil episode showed Vajpayee to be a political novice. Did he not know what to expect from Pakistan? When he should have been looking over his shoulder, they pointed out derisively, he was hugging Nawaz Sharif and reciting florid Urdu poetry. Such sarcasm was then passed for erudite analysis.

Circa 2001, and it's back to cynicism. Critics now say that Vajapyee has gone to Manali to conjure mellifluous Urdu couplets (oops, in his case it is florid, shudh sanskritised Hindi) for reciting to Musharraf. It is also being argued in some circles that even as the Prime Minister would toast the Pakistani general at Delhi's Hyderabad House, many innocent Kashmiris would become victims of Musharraf's semi-official killing machine, the Lashkar-e-Tayabba. The question is: What makes Vajpayee think that Pervez Musharraf is a changed man, a chastened man? Does Vajpayee think that the General wants to come to Delhi only to talk about the Wullar Barrage or Sir Creek?

It's not only Vajpayee whose wisdom has been questioned. Take the case of Foreign Minister Jaswant Singh. Post-Kargil, his Ministry took the high moral road that India would not talk to Pakistan until Musharraf stopped cross-border terrorism. New Delhi refused to attend a SAARC summit just because the military had taken over Islamabad. It fiddled with Vajapyee's schedules in New York last year so that Musharraf wouldn't accidentally run into Vajpayee. Jaswant Singh campaigned worldwide to get Pakistan branded as a state sponsor of terrorism. Less than six months after Kargil, Jaswant Singh had to make the deeply humiliating trip to Kandahar, Afghanistan, for an unprecedented political photo-opportunity with Taliban foreign minister Wakil Ahmed Muttawakkil. That incident could not have boosted Pakistan's stock in the Foreign Minister's eyes. It showed that, if anything, Pervez Musharraf had not changed. So, the question: Does the foreign minister think that this time around the general will finally, finally be different?

The Home Minister, too, seems to have done a neat somersault. He espoused "hot pursuit" across the border, whatever that meant. At Kargil he changed his tune and quietly allowed the remaining Pakistani intruders, what can only be called, "safe passage", though the national mood then favoured the opposite course.

Now, the formidable trio wants Musharraf to come to Delhi. This might sound confusing but there is some logic to it. One, you cannot solve a problem as knotty as Kashmir by pretending it doesn't exist. The strategy of politically ignoring Pakistan has not solved the problem. Cross border terrorism was happening even as Vajpayee crossed the border to get to Lahore. It is, as Jaswant Singh said on Monday, "a fact of life". If Musharraf did not feel encouraged to stop cross border terrorism over the last one year, it is because New Delhi has failed to get Pakistan branded as the state sponsor of terrorism.

Musharraf, obviously, doesn't feel compelled to stop cross border terrorism. That's because he probably thinks that New Delhi would then feel less encouraged to acknowledge that Pakistan has a role in the settlement of the Kashmir problem, as has been enshrined in the Shimla Accord.

Vajpayee wants to get something done about Kashmir, there can be no doubting that after his decision to give Musharraf another chance. The General has also showed some signs that he is not going to be inflexible. For instance, there's no shelling across the borders. Jaswant Singh has acknowledged that. He says that this has contributed to creating the "right atmosphere" that has led to the decision to invite Musharraf. In the absence of any other elaboration of what really are the elements that constitute a favourable atmosphere, this may not sound very much to go on, but it is certainly encouraging. Musharraf, moreover on Tuesday, indicated a willingness to put Kargil behind. The implication was that was in the past. The future is eleswhere.

More importanly, Jaswant Singh had said some time ago that the time for new map-making is over. President Bill Clinton made what can possibly be the biggest political contribution to Indo-Pak relations by upholding the status quo on the border and by his four 'R's formula -- respect the line of control, exercise restraint, reduce the level of violence, resume dialogue. These benchmarks are reasonable. Subsequently, recently, Kofi Annan, the United Nations Secretary General came to the region where he declared that the UN resolutions on Kashmir are not relevant anymore. Again, Clinton had pressured Sharif to sign the July 4 accord -- and bring to an end the bloody conflict in Kargil. These developments testify that the world opinion is now in favour of India.

Indeed, the world is watching Musharraf to see whether or not he makes the transition from military dictator to a politician of substance. Drug money alone cannot save Pakistan's economy. Musharraf knows that all indicators -- political, social, economic -- show his country is hurtling down the slippery slope. Musharraf is desperate to win international support -- and New Delhi thinks this could compel the general to behave reasonably...

India has invited Musharraf for talks but, simulatenously, it ended the ceasefire (actually, 'Non Initiation of Combat Operations') in the Valley. This will give room to deal with Pakistan-sponsored terrorism. So far as Pakistan's land grabbing strategy in Jammu and Kashmir is concerned, it has been dealt with once, and can be dealt with again. Hopefully in a better manner.

But the real fight in Kashmir is for the hearts and minds of its people. If Vajpayee pulls off this engagement successfully, and Musharraf still fails to discard his Kargil mindset and does something foolish, it will be easier to persuade those who advice engagement that Pakistan is a rogue state. Most importantly, Musharraf could not have consistently repeated that he was ready for dialogue at "any time, any place and any level" without calculating that he could take the process forward meaningfully.