Kumble's departure from the one-day scene has robbed Indian cricket of a trait most of his colleagues seem to be low on -- determination. 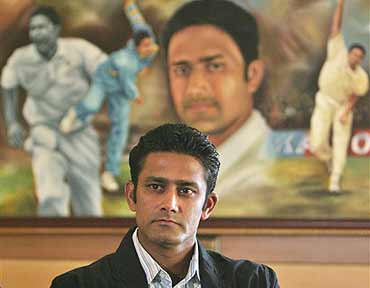 Kumble’s departure from the one-day scene has robbed Indian cricket of a trait most of his colleagues seem to be low on -- determination. The latest case in point is the World Cup debacle.

True to his nickname ‘Jumbo’, Kumble’s grit to succeed is king-sized and the figures speak for themselves. He scalped 337 wickets from 271 one-dayers at an average of 30.89. The Test figures read 547 wickets - the first Indian to manage the feat -- in 113 matches with an average of 28.65.

Be it the batsman ship Kumble displayed with Javagal Srinath in a one-dayer on home turf in Bangalore against Australia to sneak the game from them, the 24 wickets he claimed in three Tests on the 2003-04 tour of Australia, the 6-71 at Multan in 2004 to help India register their first series victory in Pakistan or the six second innings wickets last year that helped India win their first series triumph in the Caribbean in 35 years, the list is endless of the instances that time and again brought forth the veteran leg spinner’s resolve.

For someone who was not a certainty in one-day cricket, Kumble boasts of the best ODI figure by an Indian bowler. It was in 1993 when he grabbed 6-12 run in the final of the Hero Cup against the West Indies in Kolkata.

Though he had enough one-day memories to savour, the crowning glory of his career came in the Test arena during the Kotla Test in 1999, when he became the only second bowler, after England’s Jim Laker, to claim 10 wickets in a Test innings against Pakistan at the Ferozeshah Kotla in Delhi. The match was in Pakistan’s grip, but Kumble snatched it away from the cross-border rivals.

In another remarkable display of character, Kumble returned to the field to bowl, his face strapped after his jaw was fractured by a Mervyn Dillon snorter during the 2002 Antigua Test, thus making a brave statement.

Despite tremendous success, Kumble had his feet firmly on the ground. At a time when coach Greg Chappell accused some seniors of ‘operating like a mafia’ and ‘hammering’ juniors and denying them opportunities, Kumble stayed away from the spotlight, quietly practicing his craft.

His deliveries skid, rather than spin, but perfectly served the team. He does not have Muthiah Muralitharan's turn or Shane Warne's guile but his probing accuracy, variation in pace and the ability to extract bounce from dead pitches saw him return with respectable figures.

In an era dominated by prodigal turners like Warne and Muralitharan, Kumble held his own and earned his place to be bracketed with the two spin legends.

Despite the success early on the in the shorter version and his never-say die spirit, of late Kumble had to play second fiddle and often had to pave way for younger spin colleague Harbhajan Singh.

In this World Cup too, Kumble played just one match, picking up 3-38 against Bermuda, while Harbhajan was preferred against Bangladesh and Sri Lanka.

Used to being in the thick of action, this was not how Kumble would have liked to sign off. For once the tough exterior of the Bangalorean displayed a hint of sadness

‘I wanted to go with the ball in my hand. It did not happen in the last World Cup. It feels a bit different to be a part of the team and not play. I was hurt at not being a part of the eleven (against Sri Lanka) but took it in my stride. It's always nice to finish on a high note. Unfortunately, it does not seem to happen. There is not always a fairytale end. Hopefully it will happen when I leave Test cricket.’

'Not A Fairytale End'