The police have identified the man as Ashish Pandey, son of former BSP MP Rakesh Pandey. 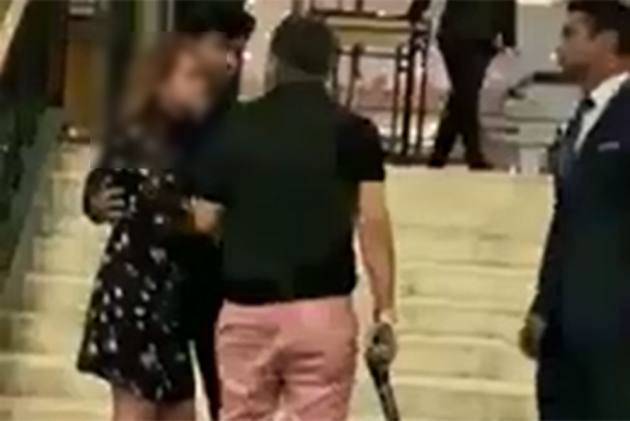 The son of a former BSP MP was booked for allegedly brandishing a gun at guests and threatening them in the foyer of a five-star hotel here, a video of which went viral on social media.

The accused, Ashish Pandey, hails from Lucknow and is the son of former BSP MP Rakesh Pandey. His brother, Ritesh Pandey, is a sitting MLA in Uttar Pradesh.

The Delhi Police said an FIR has been registered under the Arms Act and sections of the IPC, including those related to causing hurt (323), criminal intimidation (506) and using force with the intent to outrage the modesty of a woman (354).

'I Fear For The Safety Of Our Children': Robert Vadra Reacts To Gun Brandishing Incident In Delhi

Initially the case was registered under the Arms Act and sections of the Indian Penal Code (IPC) were added later, police said, adding that they have also reached out to their Uttar Pradesh counterparts.

The complaint about the incident was received Monday from the assistant security manager of the Hyatt Regency Hotel in RK Puram, following which a Look Out Circular (LOC) was issued, they said.

The Hyatt Regency in Delhi maintained that it is taking "seriously" the incident and will cooperate with the authorities in the investigation.

Latching on to the incident the Aam Aadmi Party (AAP) targeted the Centre, which controls the Delhi Police, over the law and order issue in the national capital.

Party spokesperson Dilip Pandey said the BJP-ruled Centre should answer why it has no control over the system, which it supervises through the lieutenant governor (LG), and asked what steps are being taken by police to check growing crime in the city.

BJP Delhi unit chief Manoj Tiwari said there is evidence in the form CCTV footage of the incident and a proper investigation should be conducted for appropriate action.

After the video of the incident went viral, Minister of State for Home Kiren Rijiju said the police had initiated action in the case.

"The Delhi Police has initiated action on this incident which is also being shown in the media. An FIR has been registered under the Arms Act and the IPC. Strong and appropriate action will be taken. Also verifying the identity of others," the minister tweeted.

The incident occurred in the early hours of Sunday, police said.

In the video, Ashish Pandey can purportedly be seen brandishing a gun in the foyer of the hotel, a police officer said.

One of the victims told a news channel that the accused, who held the gun, walked up to him and hurled abuses.

"A man with a gun hurled abuses at us and walked up threateningly. I was intimidated and scared. The hotel staff were present at the spot. They tried to intervene but could not as they were also scared," the victim claimed.

Police said the security staff of the hotel told them that the accused and the victims were partying at a nightclub in the hotel and had an argument over using the washroom.

A woman accompanying the accused abused the victims and called them "transgenders", a senior officer privy to the probe said.

It is suspected that both the parties involved were drunk at the time of the incident, he said.

"No PCR call was made by any of the parties or even by the hotel authorities. It is negligence on the part of the hotel as something major could have happened.

"We are exploring legal options in the matter and will also inform our licensing branch that will see what action can be taken against the hotel," another officer privy to the probe said.

He said after the video went viral, police contacted the hotel authorities and then they lodged the complaint.

The police said it had issued a LOC and also contacted their counterparts in Uttar Pradesh.

"No complaint was lodged by the victim and the hotel staff on the same day. There is negligence on the part of three parties -- the victim, hotel authorities and the accused," he said.

"The police have registered a case. We are coordinating with the Uttar Pradesh Police and teams are looking out for him.

"We have added the relevant sections based on the video. A Look Out Circular has been opened up for him," he said.

He said police are also trying to trace the victims.

The hotel said,"We take the incident that occurred at Hyatt Regency, Delhi, on seriously and have been working with the local police authorities on the same."

"We assure our support and will continue to fully cooperate with the authorities in reference to any further investigation on this matter," it said.

Police said it would be known whether the accused was carrying a licensed weapon or not after he is caught.

Robert Vardra has asked who was accountable for the deteriorating law and order in Delhi.

"I really fear for the safety of our children and the people of our city, the capital of our country," he said in a Facebook post.

"What is the Law and Order prevailing and who is accountable? Has the Chief Minister seen what is existing and will they make an example of this insane behaviour with guns and profanity?" he added.