Abhishek Banerjee had earlier asked Prime Minister Narendra Modi to apologise for his alleged derogatory remarks against him at a rally on May 15. 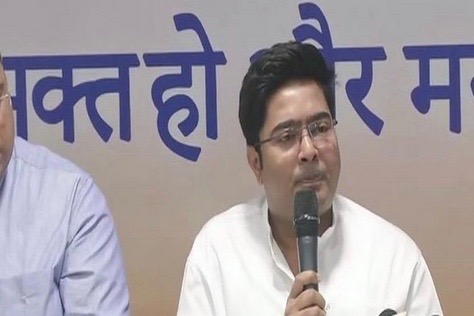 Trinamool Congress leader Abhishek Banerjee, the nephew of West Bengal Chief Minister Mamata Banerjee, has sent a defamation notice to Prime Minister Narendra Modi for his alleged derogatory remarks made against him at a rally on May 15.

Abhishek Banerjee sent the defamation notice through his lawyer.

TMC leader & nephew of West Bengal CM Mamata Banerjee, Abhishek Banerjee through his lawyer sends a defamation notice to Prime Minister Narendra Modi for alleged derogatory remarks made against him in a public rally on 15 May, held in Diamond Harbour in West Bengal. (file pic) pic.twitter.com/3kYEcyiQBu

On Thursday the Trinamool Congress MP had threatened to send a legal notice to Prime Minister Modi over the latter's claim at a rally in Diamond Harbour,  West Bengal, that Abhishek was illegally occupying the building from where he runs the TMC party office.

Abhishek had also reportedly asked PM Modi to apologise within 48 hours failing which, he threatened to file a criminal case against him.