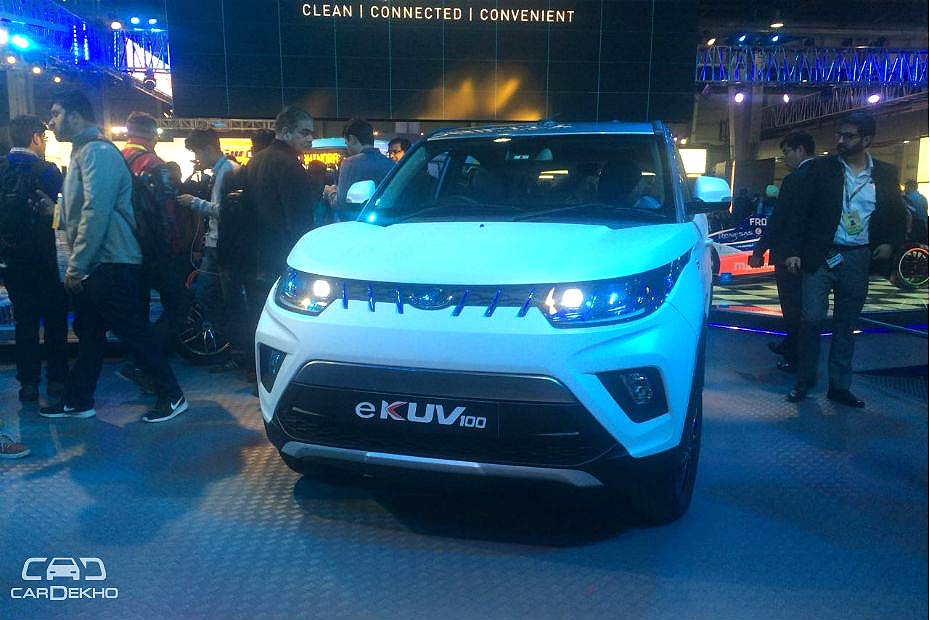 Mahindra and Mahindra (M&M) has unveiled its all-electric KUV100 at the ongoing Auto Expo 2018 in Delhi. As promised by managing director of M&M, Pawan Goenka, in October last year, all future SUVs and crossovers in the homegrown automaker’s portfolio will have an electric variant soon. To be introduced by the end of this year, the KUV100 will be the first SUV in India to be launched in an all-electric avatar.

Except for the EV badging at the rear, the electric KUV100 looks similar to the regular car. The swooping lines and contours continue to flow across the body of the electric version as well. The interiors too are shared with the regular KUV 100. However, the gear lever is noticeably absent in the alternate fuel vehicle. The six-seat option seems to make more sense with the electric version of the Mahindra SUV as there’s absolutely no hindrance for the front middle passenger.

Mahindra says the electric KUV is connected as well so its packed with smartphone connectivity, remote diagnostics feature, cabin pre-cooling, real time location tracking and even keeps an eye on the driving patterns of the drivers with battery status.

Charging Time: 80 Per Cent in less than an hour

Mahindra Electric, the carmaker’s official arm for the production of EVs, has been instrumental in developing electric vehicles in India. It already retails the Mahindra e2o Plus hatchback and the e-Verito sedan in the country.