Viceroy's House was not just an "Englishman dressed for the climate". Nor were the Indian craftsmen tailors from Agra or Benares. 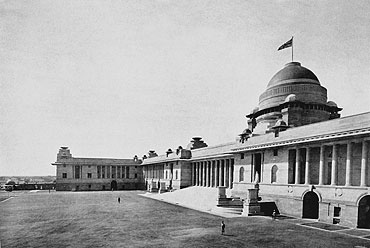 outlookindia.com
-0001-11-30T00:00:00+05:53
Lord Hardinge had insisted upon Indianisation in the Viceroy’s House design, but once the building was complete, the classical European purist Edwin Lutyens set about claiming it as his own idea. To this end he wrote in 1932: "There are two ways of building in India, one to parade your buildings in fancy dress as at a Fancy Ball, mixing dates and styles, so the creation becomes something really funny; or to build as an Englishman dressed for the climate, conscious only that your tailor is of Agra or Benares, and not of Savile Row or Petticot Lane. It is the latter method I prefer."

But Viceroy’s House was not just an "Englishman dressed for the climate". Nor were the Indian craftsmen tailors from Agra or Benares. It was indeed the patchwork of mixed periods and styles—"something really funny"—as viewed on the building’s southern façade, which history has finally come to accept on the Indian horizon. A third-century Buddhist stupa-dome and railings from Sanchi sit atop a drum, appended with four octagonal Islamic-Rajput kiosks. Below this sits a Palladian-Renaissance floor with round arched gateways, shaded by wide Rajasthani eaves, or chhajjas. And, as if this potpourri were not enough, the service entrance goes completely ‘native’ inspired from indigenous cave architecture at Ellora and Elephanta. Here, elephant legs and overhanging sandstone bells presumably create the Delhi Order in their capitals.