The police can fight terrorists, not terrorism. Terrorism can be contained only by a strong political will that identifies and isolates individuals and organisations promoting a violent mindset and does not favour them with political patronage. 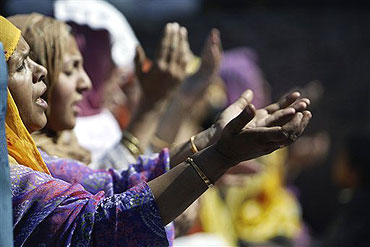 "And fear tumult or oppression, which affects not in particular only those of you who do wrong. And know that God is strict in punishment."

Ibn Katheer commenting on this verse has quoted a Prophetic tradition saying that "if a people, despite being strong and numerous, do nothing to stop those men among them who do wrong, then they will be surrounded with punishment".

History is full of instances showing how a small group of people or individuals by their odious acts have inconvenienced the communities they belong to.

Today the Muslims as a community are passing through a difficult period on account of the activities of terrorists who shamelessly use religion to justify their crimes.

A common Muslim, like his compatriots, is busy earning his daily bread and raising the family. With increased awakening about modern education, good numbers of Muslim families from rural areas have moved to urban centres to ensure education for their wards. A casual survey of the families living in Jamia Nagar will show that the majority of them hail from villages and depend for their income on rural sources. In many cases it is only the mothers and children who are living here, while the men spend most of their time in native places to arrange the necessary means for the family to carry on in Delhi. Their only concern is a safe and peaceful environment congenial for academic pursuit.

On the other hand, attracted by this large population, more than two dozen Muslim outfits have established themselves in this neighbourhood taking upon them the responsibility to lead and organise the religious and social life of the community. They include organisations like the Personal Law Board, Muslim Majlis-e-Mushawarat and Jamaat-e-Islami. None of these organisations is known for promoting social reform or education. Most of the time they are competing with each other in crying wolf and pressing the need to fight against imagined threats to the Muslim religion and identity. Occasionally they also succeed in securing positions of power for their nominees and this political patronage helps them to widen their network in the community.

If we look at some important events of the past then an idea can be formed about the activities and mindset that is promoted by these organisations.

After the official ban on The Satanic Verses, Mushirul Hasan, the present vice chancellor and then teacher in the history department of Jamia, said in an interview to a weekly that a ban on the book would only boost its sales and increase the circulation of the objectionable writing. His remarks were not in support of the book, its contents or the writer, yet they provoked an angry and violent protest inside the campus. The Muslim outfits worked overtime to instigate and excite the feelings resulting in a situation where despite continuing on the rolls of the university Mushirul Hasan could not enter the campus for more than three long years.

During the war in Afghanistan, public expressions of solidarity with Osama bin Laden were made and posters in his support were pasted in the area by some self-appointed champions of Muslim interests. This was done despite the knowledge that Osama and Al-Qaeda were directly involved in Terror activities in Kashmir. I remember having met many Muslims from Jamia Nagar who expressed their utter indignation over the episode and felt sorry for not being able to oppose these undesirable activities.

In 1990, Prof Mushirul Haq, the vice chancellor of Kashmir University, was killed by terrorists in Srinagar. Since he was an old teacher of Jamia, his burial took place inside the campus. As an academician I had held him in great esteem and during the Shah Bano controversy had sought his opinion on several occasions. I went to attend his last rites and walked almost a kilometre with the funeral procession. After reaching the burial ground suddenly the lights went out and in that darkness I was attacked with an iron rod, causing head injury. Later, inquiries revealed that the students who had organised the blackout and attack belonged to the Jamaat-e-Islami. It is important to recall that the banned organisation, SIMI, was mostly manned by young activists inspired by philosophies like that of the Jamaat-e-Islami.

The other organisation with headquarters in this area is Muslim Majlis-e-Mushawarat. On the slightest provocation they would call for a boycott of celebrations of Independence Day or Republic Day giving rise to communal tension. It is true that on every occasion they had withdrawn the calls, but that did not help in lessening the tension.

The most important Muslim organisation operating from the Jamia neighborhood is the All India Muslim Personal Law Board and its affiliates. During their agitation against the judgment of the Supreme Court in the Shah Bano case, the members of AIMPLB made public exhortations to break the legs of Muslims who differed with their stand. Their supporters went to the extent of suggesting that Supreme Court judges are not competent to interpret Muslim personal law.

It is important to recall that during parliamentary discussion of the bill that was brought in to negate the impact of the Supreme Court judgment, almost every minister who rose to defend the measure referred to the apprehensions of threats to law and order arising on account of an aggressive and violent agitation.

Such activities of these Muslim outfits are as much a source of consternation to common Muslims as they are to other Indians. Occasionally some Muslims raise their voice but they lose nerve when they see the political promiscuity and influence enjoyed by these extremist elements.

The establishment must realise that the police can fight terrorists, not terrorism. Terrorism can be contained only by a strong political will that identifies and isolates individuals and organisations promoting a violent mindset and does not favour them with political patronage.