Pakistan's Proxy War, Phase III. Lone was targeted not only because he was seen as a moderate, but also because he was perceived as close to the US, as evidenced by his recent meetings with US officials. More on 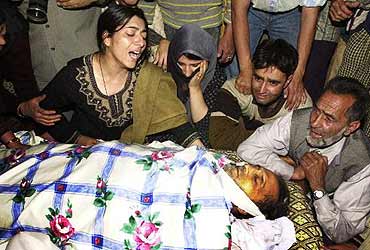 One could see in the massacre of 33 innocent persons, including 11 children, at Kaluchak, near Jammu, by three Pakistani Punjabi terrorists on May 14, 2002, and in the assassination of Abdul Gani Lone, the moderate Kashmiri leader, in Srinagar on May 21, 2002, the hand of the dregs from Afghanistan, who have been inducted by Pakistan's military-intelligence establishment, not only into Jammu & Kashmir, but also possibly into other parts of India to create mayhem.

Pakistani-sponsored terrorism against India has now entered a new phase--its third phase.  The first phase from 1989 to 1993 relied largely on indigenous Kashmiri groups such as the Jammu & Kashmir Liberation Front (JKLF), the Hizbul Mujahideen (HM) etc.

The second phase post-1993 relied increasingly on Pakistani Punjabi organisations such as the Harkat-ul-Mujahideen (HUM), the Harkat-ul-Jihad-al-Islami (HUJI), the Lashkar-e-Toiba (LET), the Al Badr and the Jaish-e-Mohammad (JEM) etc.  All these organisations, except Al Badr, which was close to Gulbuddin Heckmatyar's Hizbe Islami, joined Osama bin Laden's International Islamic Front For Jehad Against the US and Israel, along with the Sunni extremist Sipah-e-Sahaba Pakistan (SSP), in 1998 and thereafter started emulating the Al Qaeda's suicide tactics in J&K, which had not seen suicide terrorism before they joined bin Laden's International Islamic Front.

While some sections of these Pakistani jehadi organisations were infiltrated into J&K by the Inter-Services Intelligence (ISI) to step up the violence in the State, some other sections, much larger in number than those infiltrated into India, were taken by the ISI to Afghanistan to help the Taliban consolidate its power and to help it in fighting the Northern Alliance led by the late Ahmed Shah Masood.

After October 7,2001, they fought jointly with the Taliban and the Al Qaeda in Mazar-e-Sharif and Kabul. After these towns were captured by the Northern Alliance, with the help of the US air strikes,during which they suffered fatal casualties estimated at about 8,000, the survivors re-entered Pakistan seething with anger against the US and India.

These elements have now been diverted by Pakistan into Jammu & Kashmir and possibly also into other parts of India to step up the violence.  They belong to the same organisations which were hitherto active in J&K such as the HUM, the HUJI, the LET, and the JEM, but their battle inoculation was with the Al Qaeda in Afghanistan.

Lone was targeted not only because he was seen as a moderate, but also because he was perceived as close to the US.  His recent visit to the US during which he stayed with Mumtaz Wani of the JKLF in Washington DC and reportedly met, amongst others, Mrs. Robin Raphael, now in the National Defence University, Michael Krepon of the Stimson Centre and Walter Andersen of the US State Department as well as some officials of the US Central Intelligence Agency (CIA) was viewed with suspicion by these pro-Al Qaeda elements.  The subsequent visit of Krepon to the Valley added to their suspicion that the US Administration, through people close to it, was trying to use Lone and other moderate leaders to make the forthcoming elections in the State a success.

Lone's assassination is meant as a warning to other Kashmiri leaders not to entertain any thoughts of entering the electoral process and not to let themselves be influenced by the US.