Moscow and Beijing are coming together to invoke 1945 to strengthen their moral position for a stable world order. 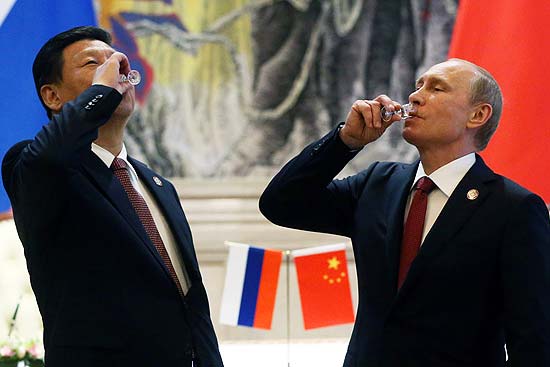 On 9 May, Russia's president, Vladimir Putin, flanked by his prized guest, Xi Jinping will preside over the 70th anniversary parade to commemorate the victory over Nazi Germany in 1945. No western leader will attend this event. States often use history and symbolism to preserve their collective memories, and, sustain their values and identities. But representations of 1945 have become deeply contested and exemplify the struggle in world politics today.

For America today, 1945 represents the apogee of its wealth and power. With the industrial West and Japan decimated and on its knees, the US projected itself with purpose and conviction to re-construct and organize these regions into a new world order. That order would define its external identity as a struggle against the Soviet world. For the US-led West, 1991 marked a turning point, if not the final chapter, in its quest to remake the world system. 1945 was relegated to an interim moment in a journey towards an unfettered diffusion of US ideas and influence. The image of 1991 became central for how the West would perceive its role in the post-Cold War era. And until the mid-2000s, there was little in the way of alternative ideas or opposing power to challenge this triumphalist image. For the past decade, the US-designed order has been confronting structural challenges from states outside its sphere. The revival of Eurasian states and China's defection from a quasi-alignment with the West have re-opened contestations over the past.

For Russia, 1991 embodies a dark chapter, what Putin calls the "greatest geopolitical catastrophe of the century". Rejecting the triumphalist narrative, for Russians who experienced the tumult of the 1990s, 1991 is an image of weakness and false optimism. It is 1945 that is a sacrosanct image. Although Russia's historic role in destroying hegemonic projects in Europe was first demonstrated in its successful resistance to Napoleonic France in 1812, it was the struggle against Nazi Germany that defined Soviet identity and status after 1945. That struggle was so titanic and so costly in blood and treasure that generations of Russians have defined their state's identity in Europe and globally upon that one seminal event — the "Great Patriotic War". As Dmitry Trenin notes, "Russians generally believe that their most valuable contribution to humanity was the defeat of Hitler's war machine."

Contestations between the West and Russia are not simply on the different experiences of their common struggle against fascism and militarism but on the meaning and perceived consequences of 1945. For the US, which played a relatively marginal role in destroying the Third Reich, the event is more of a coming of age story. An America transcending its insular instincts to assume world leadership by profiting from the self-destruction of the old order. For Russia, who destroyed over 90 percent of Germany's forces at the cost of 27 million lives, the war is central to understanding and resolving the European security problem. The solution, which also found resonance among Western statesmen at that time, was the idea of a legitimate sphere of influence — a buffer — against potential geopolitical ambitions of the dominant power in Europe. The breakdown of this system of security in 1991 and its displacement with cycles of NATO expansion deeper and deeper into the 1945 buffer zone heightened Russian insecurity and provoked a pushback manifesting in conflicts on the Russian periphery since 2008. Although Russian power is now more than adequate to defend its core interests, Russia's perceptions of its contemporary challenges also includes resisting Western attempts to appropriate or negate the history of 1945. The Ukrainian conflict impelled Moscow, to once "again demonstrate to the world Russia's categorical rejection of Fascism", in the words of its Defense Minister last May.

Contestations over 1945 have also extended to Asia. Again, the growing rivalry between US and China has precipitated a struggle over history. Although contemporary US-China frictions do not possess the antagonism underlying the US-Russia rivalry, 1945 has become important for China's representation of its past. The struggle against the Japanese invasion became a defining event for the Chinese people and a poignant concluding chapter in the "century of humiliation", which began in the 1840s. The fall of Japan in 1945 paved the way for post-war alignments. Stalin's much deeper investment in Mao's revolution trumped America's support for Chiang Kai-shek's nationalist forces in the Chinese civil war. Having "lost" China to Russia by 1949, America deepened its involvement in Japan and quickly forged a military alliance with Tokyo.

For the most part, however, it was China's domestic revolution that has dominated Chinese images. China's later defection to the Western camp in the 1970s further diminished incentives to play up 1945. For the CCP, historiography has been essentially about representing the Party as the vanguard of China's resurgence. Historical events no matter how traumatic are appropriated through the principal aim of embedding the Party's role and identity with China's self-image in the post-humiliation era. Unlike in Russia where historical images are central to also legitimizing a regional and global order, the main purpose of history in China is to legitimize the connection between the Party, the state and the people.

But China's rise is changing this. Frictions with the US and the emerging prospect of a US-allied Japan expanding its military role in East Asia has prompted Chinese leaders to invoke 1945 as a positive symbol for organizing Asian geopolitics via the taming of Japanese militarism. In February 2014, Beijing formally declared 3 September as "Victory Day" to mark the Japanese surrender on the mainland. A Chinese lawmaker explained that, "the planned designation of the victory day reflects the will of the Chinese people and reminds us of the need to remember history".

For the first time since the 1950s, the US is engaged in a geopolitical struggle against Russia and China simultaneously. Moscow and Beijing have come together to not just counter-balance American power in Europe and Asia but are collectively invoking 1945 to strengthen their moral positions and recovering the past as an example for a stable world order. The US, which made an important contribution in a shared struggle with Russia and China during the Second World War, finds itself negating a universal image of 1945. India's President, however, will attend the 9 May event and a contingent of Indian Army soldiers will for the first time march in the Moscow parade.