Get here Day 1 highlights and cricket scores of first India vs New Zealand Test at Green Park, Kanpur. India fought back to reach 258/4 in 84 overs when bad light stopped play. 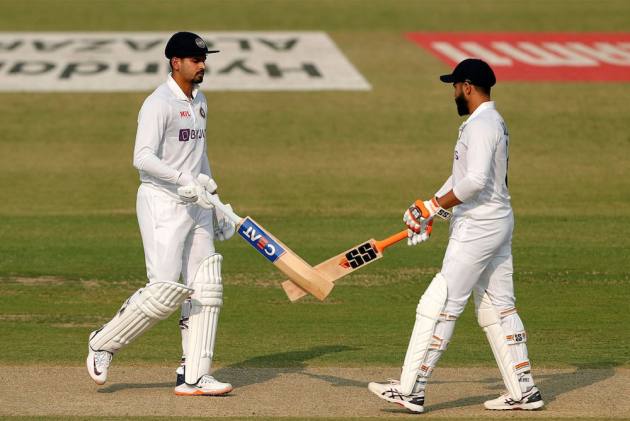 India fought back to reach 258/4 (84) at the close of play on Day 1 of the first Test against world champions New Zealand at Green Park, Kanpur Thursday. Batting first, India were struggling at 145/4 in 49.2 overs with stand-in skipper Ajinkya Rahane becoming Kyle Jamieson's third victim. Then a century stand between debutant Shreyas Iyer and Ravindra Jadeja helped India dominate the proceedings till close of play.

When play was stopped, Iyer and Jadeja were unbeaten on 75 off 136 balls and 50 off 100, respectively, and were in a solid 113-run stand for the fifth wicket. Earlier, India lost three wickets in the afternoon session with Kyle Jamieson (3/47) taking three wickets. Veteran Tim Southee (1/43) took one wicket.

The Green Park in Kanpur has been a fortress for the Indian cricket team. In the last 62 years, India have been beaten just once by the once formidable West Indies in 1983. In absence of Virat Kohli, Rahane is leading India's challenge against ICC World Test champions. Get Day 1 highlights and cricket scores of India vs New Zealand first Test.

Second new ball is due and taken right away. The lights on. 29 runs in the last ten overs as the action somehow fizzled out. New ball to inject new life in the match. A 96-run stand for the fifth wicket as Shreyas Iyer and Ravindra Jadeja continued to build their partnership. 10 overs left in the day. IND - 241/4 (80)

A 68-run stand in 130 balls as India fight back. Shreyas Iyer and Ravindra Jadeja batting on 54 and 27 runs respectively. Ajaz Patel and Tim Southee bowling in tandem. Another 19 overs left in the day. IND 213/4 (71)

Maiden Test half-century for Shreyas Iyer. He nudges one from Tim Southee for a single to bring up his maiden fifty on debut. What an innings this Mumbai lad has played today. India 202/4

Shreyas Iyer has lived up to his reputation as a good red-ball player and the right-hander is showing in Kanpur why is highly regarded. Despite India losing three wickets in the afternoon session, Iyer hung in at one end and is four runs shy of his maiden Test fifty. India 195/4.

What a session New Zealand had, especially for Kyle Jamieson. Three wickets in the afternoon session put the visitors on top. Jamieson is just one wicket short of reaching the magic figure of 50 in Tests.  India 154/4 at Tea. Shreyas Iyer and Ravindra Jadeja are at the crease.

Another Indian batsman bites the dust. Tim Southee gets Cheteshwar Pujara for 26, caught by Tom Blundell. New Zealand have been brilliant after the break. Debutant Shreyas Iyer comes in the middle. India 106/3

Kyle Jamieson strikes in the first over after lunch, clean bowled Shubman Gill for 52. Jamieson bowls a good length delivery, Gill gets forward and the ball goes through the gap between bat and pad onto the stumps. Ajinkya Rahane joins Cheteshwar Pujara in the middle. India 89/2.

Fifty for Shubman Gill. What a knock from this youngster. This is Gill's fourth Test fifty. Cheteshwar Pujara is batting at 15. India 82/1 (28). Lunch Break

50 up for India. After the early dismissal of Mayank Agarwal, Shubman Gill has taken on the charge against the New Zealand bowlers. The right-hander just hit a six and a four off Ajaz Patel. India 53/1 (17)

Kyle Jamieson gives New Zealand a breakthrough. The tall lanky pacer gets Mayank Agarwal, caught behind by Tom Blundell for an unlucky 13. Cheteshwar Pujara comes in the middle. India 24/1 (9)

Mayank Agarwal hits the first four of the match off Tim Southee. The ball didn't bounce much, gets the outside edge and falls short of Tom Blundell to sail towards the ropes. India 15/0 (5)

The wicket looks good to bat early on but the cracks will open up once the play progresses. Bowlers will have a good time here as the spinners will get turn on this pitch and the pacers will get swing as well. The last time a Test match was played at this venue was five years ago, reports Deep Dasgupta.

Kane Williamson: It's very important to get wickets here first. We are going in with two spinners in Ajaz Patel and Will Somerville, two pacers and a spinning all-rounder Rachin Ravindra makes his debut.

Ajinkya Rahane: The pitch looks really good here. It's an opportunity for the youngsters since few seniors are missing. Shreyas Iyer is making his debut. I personally enjoy playing under Rahul (Dravid) bhai.  We are going with three spinners and two seamers.

India have won the toss and they will bat first.

As confirmed before by Ajinkya Rahane, Shreyas Iyer gets his maiden Test cap by none other than legendary Sunil Gavaskar. What a moment for the Mumbai lad.

Hello and a warm welcome to everyone in this Day 1 coverage of the first Test between India and New Zealand. India have won the T20 series against the Kiwis 3-0.

Having lost the T20 series 3-0, New Zealand will aim to defend their status as World Test Champions in Kanpur. No. 1 in the ICC Test rankings, New Zealand will face a stiff test in Indian conditions and the result of the two-Test series will prove if the Kiwis are good in all kinds of playing conditions.

Kanpur will certainly not roll out a green top. When Ajinkya Rahane, captain for the first Test, said India will exploit the home conditions to the fullest, it is given that the ball is going to turn a lot. It won't be surprising to see if both teams opt for a third specialist spinner and sacrifice a batsman.

India have said Shreyas Iyer will make his Test debut on Thursday. Whether Suryakumar Yadav, who replaced KL Rahul, makes his Test debut too will depend on the choice of the third spinner (Axar Patel).

Both India and New Zealand will be missing key players. While Kohli, Rishabh Pant, Mohammed Shami and Jasprit Bumrah have been rested, the Kiwis will miss Trent Boult and Colin Grandhomme.

Yet, New Zealand have enough experience in their group. Led by the unflappable Kane Williamson, New Zealand will never be short on confidence. Ross Taylor's role in the top order and Tim Southee's bowling will be decisive.

How New Zealand cope with Kanpur's conditions remains to be seen. Their last nine Tests have either been at home or in the UK. Spin was never a big factor. In Kanpur, the spin will be the most powerful variable.