Will the UPA government be forced to veer to the left? Surprise, surprise, it may not just be because of pressure from a resurgent Left winning handsomely in West Bengal and Kerala elections. 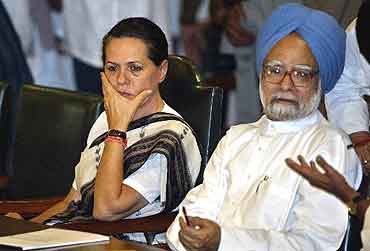 Will the UPA government be put on a Left hand drive with the CPI(M)-led Fronts winning handsomely in West Bengal and Kerala elections? All indications are that the pressure will mount on the Manmohan Singh government to wear `people' friendly bi-focals when it comes to taking economic decisions like hiking fuel prices or framing policies in areas like civil aviation and modernisation of airports. Also the tilt in India's pro-US foreign policy may now be opposed even more vigorously by the comrades.

Here is the list of subjects revealed to Outlook by a senior member of the CPI (M) politburo that are bound to see vociferous articulation and activation by the Left: Questions on the role of the Election Commission in the West Bengal polls in Parliament. Voting against the Insurance Bill. Opposition to the proposed hike in fuel prices. Putting the brakes on privatisation of Chennai and Calcutta airports, seeking a greater role for the Airports Authority of India. And of course that old bone of contention: a foreign policy not dictated by the US.

The only consolation for Manmohan Singh is that the Left has formally stated that it will not bring the government down and that it will re-examine FDI in retail and other sectors without rejecting proposals outright. 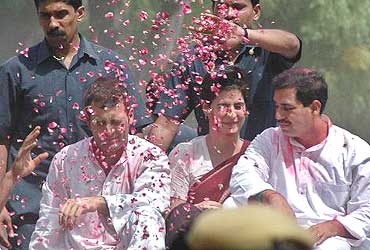 As for the Left turn. It is not the CPI (M) and its friends who are threatening to raise the aam aadmi banner. Many Congressmen are of the view that the Manmohan Singh government is indeed losing its way. That its pro-market policies have alienated the party's traditional vote bank. And Muslims are beginning to spurn the Congress after President Bush's visit earlier this year. In fact, in Kerala the community ditched the Congress and voted Left and in Assam the newly formed Muslim front--the AUDF--cut into Congress votes.

So has the Congress fared poorly? On paper it would appear that the party has nothing to complain about. It has won Pondicherry, it will form the next government in Assam and is part of the winning DMK-led front in Tamil Nadu. And in Rae Bareli Sonia Gandhi romped home with some four lakh votes. 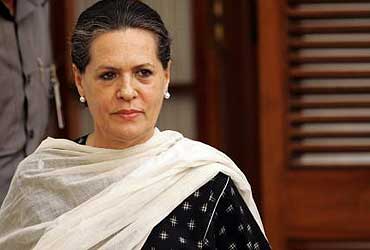 But discomfort levels have gone up in the Congress because of the sheer scale of the Left victory in two key states. This has led many Congressmen to wonder whether the party's current strategy is actually working on the ground. To put it bluntly: are the economic policies of the government going down well with the people or are they only being applauded by economists and trade organisations? Is it all a disastrous sequel to the BJP's India Shining campaign? Desperate party MPs looking for a "course correction" have already knocked at the one stop Congress remedy shop: 10 Janpath. Twenty five of them have urged Sonia to take over as prime minister. She has of course been dismissive of the suggestion.

Undoubtedly there is a churning in the Congress which will only speed up in the days to come. Reforms with a human face that Manmohan Singh often talks about is coming to haunt him. One complaint one hears from his own partymen is that he doesn't have time for party MPs but has all the time in the world for business delegations. They claim that he has left the politics to Sonia Gandhi. But the big question is, as PM, can he afford to be ambiguous on a host of critical issues from Narmada to reservations?

In a country like India, striking a balance between people-oriented policies and those which are applauded by business and elite interests is difficult. There are those in the Left who feel that Buddhadeb Bhattacharjee has struck this balance in West Bengal. Which is why they say the Front has managed to win a landslide victory in the state. So is there some truth about tempering harsh economic reforms with what right wing economists dismiss as populist programmes? Consider this: the Left opposition to the proposed petrol price hike will, to give a topical example, find immediate resonance and backing from the country's vocal middle class.

Likewise, in the Tamil Nadu campaign Union finance minister P. Chidambram had to wear a populist hat when he pronounced at rally after rally that the Rs 2 per kg of rice promised by his party's ally, the DMK, in its manifesto was actually feasible. And Jayalalitha had to scrap many of her cost cutting programmes recommended by NGOs like the World Bank. The moral of the story: You can't ignore the people. Neither can you win elections if you get the `great reformer' stamp from business confederations like the CII. The trick seems to be to encourage the business lobbies to interface with the people in a more humane manner. 'Greater India Whining is not India Shining' of May 2004 seems suddenly to be coming back into focus in May 2006.