Last year, the Finance Bill was passed unchallenged amidst sparse attendance in Lok Sabha, this time a new funding pattern called electoral bonds is set to be passed amid Ramjas din 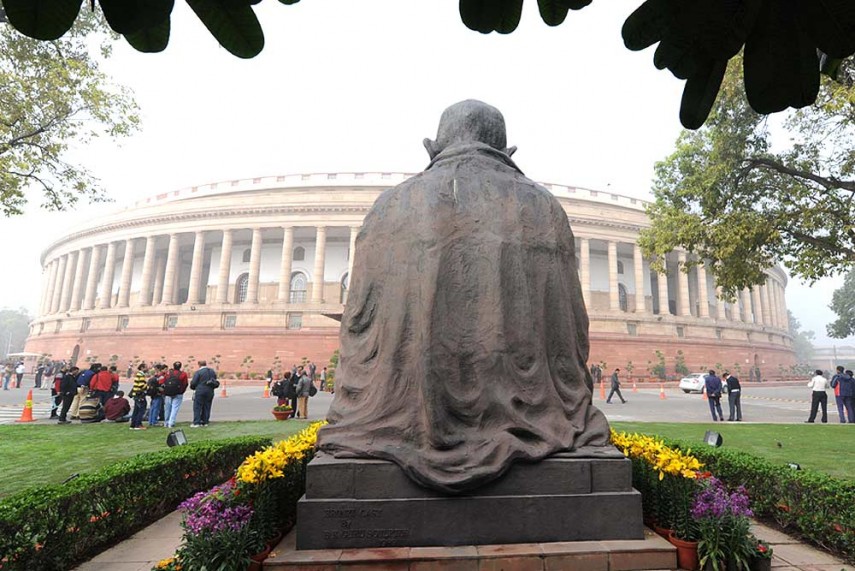 The ongoing student Delhi University protests provide a sense of deja vu. Let’s recap: An incident in Ramjas college sparks a massive dustup between Akhil Bhartiya Vidyarthi Parishad (ABVP) and other left-leaning student bodies. They clash over alleged anti-India slogans. The whirpool quickly draws in a list of characters: 20-year-old Gurmehar Kaur, Minister of State for Home Kiren Rijiju and a whole host of influential people. Media goes berserk and the public positions themselves on either side of the divide.

Rewind to a time exactly a year ago when similar protests rocked Jawaharlal Nehru University, slogans were shouted, ABVP lapped up the opposition role , and Smriti Irani, erstwhile Human Resource Development Minister, lead the charge against “anti-national elements”. Videos were aired on media channels of people in JNU shouting “Aazaadi”. A singular character called Kanhaiya Kumar emerged out of the shadows and was hailed a hero.

When the controversy broke out in February 2016, the issue was debated and discussed by the media for weeks leading up to the Budget session of Parliament. The opposition and the government initiated a discussion titled “Situation arising out of recent incidents in institutions of higher education” in Lok Sabha on the second day after the session commenced.

In this madness, the Finance Bill 2016 was introduced which had two vital provisions. One was about the Monetary Policy Committee which overhauls the interest rate setting mechanism for the Reserve Bank of India. The second provision was an amendment to the Foreign Contribution Regulation Act (FCRA) which allowed political parties to take donations from foreign sources retrospectively from September 2010.

The Finance Bill was passed unchallenged with only one member standing up to oppose the RBI amendment during the debate, amidst sparse attendance in Lok Sabha. The FCRA amendment went unchallenged, nobody seemed to be aware of it.

Experts had argued that these vital new provisions needed to be discussed and debated in both houses as separate laws.

One more piece of vital legislation which was passed in a hurry around this time was the Aadhaar (Targeted Delivery of Financial and other Subsidies, Benefits and Services) Bill, 2016. Barely 75 odd members were present in the Lok Sabha when this bill was cleared and certified as a money bill, complete with glaring loopholes which are being exploited a year later today. The Finance Bill is also a money bill in nature so Rajya Sabha had no say in either of these bills.

The result: In the madness surrounding JNU crisis and shortly followed by the Augusta-Westland controversy, important legislative business was largely ignored by the media, opposition parties and the public at large.

With the Delhi University protests flaring up, we find ourselves in the same boat yet again, a year later. Budget session resumes in a week from now. The government is getting ready to pass the Finance Bill 2017 in Lok Sabha which has some draconian provisions within. Meanwhile, the controversial bonfire of nationalism is being fanned and sprinkled with desi ghee from all directions.

This year’s Finance Bill has two provisions which need to be highlighted. One, it introduces a new form of political funding called ‘electoral bonds’. A person can buy bonds from registered banks via cheque/bank transfer and anonymously give that bond to her favorite political party. The political party, in turn, can redeem that bond from a registered bank where they have an account. At the moment, according to the Association of Democratic Reforms, 70% of donations to political parties are given in cash anonymously. This new electoral bond provision would ensure that 100% of donations will become anonymous. The whole system will become opaque.

Two, an amendment to the Income Tax Act is being proposed which gives unfettered powers to Income Tax officials for conducting raids. At present, Section 132 of the Income Tax Act gives the IT department powers to raid businesses and individuals if they have “reason to believe”. The “reason to believe” protection is available for the person getting raided, if she feels that the action taken was incorrect. The IT officers can be challenged and asked to explain why they conducted the search & seizure. These cases are referred to the Income Tax Appellate Tribunal, which is a special quasi-judicial body established to decide on such things.

That is about to change dramatically if the Finance Bill this year is cleared by the Lok Sabha. The Government has proposed a curious amendment to allow IT officials not to disclose their reasons for conducting search and seizure. What’s more, this amendment is retrospective in nature i.e. assessment for people who have been raided now can be done from year 1962 onwards. Also, they can be ordered to hand over their books of accounts, property, assets from 1975 onwards.

It’s important to mention that this provision, in many ways, also allows IT Department to hold tax evaders accountable more efficiently, especially those who use legalese and exploit the “reasons to believe” provisions to get away. However, the arbitrary power being given to IT officials, to not disclose any reasons, can potentially be used as a political tool to harass opponents and intimidate them into silence.

The implications of both these changes proposed in the Finance Bill, which will be debated and passed after March 9, are massive and long-term. Laws like these will be exploited even by future governments, not just the current one, unless debated and challenged in Parliament.

It’s worrying that amidst all this Ramjas college drama, there is a possibility that the present government will get away with passing the Finance Act without being challenged. It is important to mention here that since this is going to be a money bill by default, and given the brute majority enjoyed by BJP in Lok Sabha, this bill will sail through unhindered anyway. Members of Lok Sabha must stand up and debate these provisions. The job of the opposition is to hold the Government accountable for any legislative misadventures and this is one prime example of that.

Since 2014, issues like JNU & Ramjas keep popping up right before Parliament sessions and overshadow the legislative business. From Dadri beef lynching to the Lalit Modi scandal, from the intolerance debate to Kashmir violence, there have been incidents which have been given unreasonable amount of attention. They should be discussed, but not to an extent where they end up overshadowing vital legislation.

It would take a considerable leap of imagination to assume this is some large conspiracy to distract attention from legislation in Parliament and regulations being passed by bureaucrats. But, given how ministers seem to jump in and comment on minor issues right before Parliament resumes, given how the opposition parties take the bait and make it even bigger, given how the media makes it ‘spicy’ by introducing one angle after the other, having panel discussions for weeks on the same topic, given how we, the Whatsapp/Twitter/Facebook loving public, perpetuate these toxic incidents and help draw more attention to them than required, one can’t help but wonder: Is all of this deliberate?

(Meghnad S. is a public policy professional working as the Chief of Staff with a Member of Parliament. He is also a columnist, writer and compulsive Lok-Sabha-TV-watcher. The author can be contacted at @memeghnad on twitter.)