The skipper's defiant 120 off 307 balls that spanned more than three sessions spread over two days and some stout batting by the lower order denied the Indians a rare victory in the Caribbean. 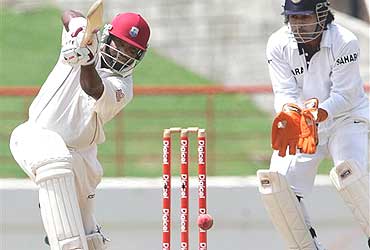 A classic piece de resistance by West Indian captain Brian Lara and some stout batting by the lower order denied the Indians a rare victory in the Caribbean in the second Test on Wednesday.

Lara's defiant 120 was the cornerstone of a spirited performance by the hosts who, starting the day on 43 for one and needing 373 to avoid an innings defeat, remained unconquered on 294 for seven at close on the fifth and final day at the Beausejour stadium.

The left-hander faced 307 balls for his 32nd Test century that spanned more than three sessions spread over two days and featured in a match-saving 129-run partnership with ex-captain Shivnarine Chanderpaul.

Chanderpaul contributed a vital 54 from 113 balls and there was also a valuable 47 by none other than Lara's protege Dwayne Bravo who shared a crucial 71-run stand for the fifth wicket with his mentor to keep the Indians at bay.

And the tail, unlike in the first Test at Antigua, wagged long enough and, more importantly, consumed time to placate the never-say-die spirit of Rahul Dravid's men.

In the end, India, who failed to break up the last West Indian pair at Antigua, fell short by three wickets.

They would only wonder if only the fourth day's play wasn't washed out by the rains, if only the numerous half chances that came their way today were converted, if only Munaf Patel was brought on earlier towards the end of the day.

Kumble (3-98) and man of the match Virender Sehwag (1-48), in his new avatar as part-time offie, kept rolling their arms over and over. The two bowled 72 overs between them and took four wickets.

But when Patel swung one back in to strike Ian Bradshaw plumb in front in fading light, one couldn't help wonder if Dravid over-bowled his two slow bowlers.

Lara was patience personified as he cut out any cut or pull from his repertoire of strokes and concentrated on playing in the straight arc.

He had a lucky break on 71 when Yuvraj Singh at forward short leg dropped him off Kumble, who with his niggardly accuracy and precision, posed as ever most questions to the batsmen.

Kumble bowled tirelessly for much of the afternoon, as he had done in the morning session, before he tasted success in the form of Chanderpaul's wicket.

Chanderpaul tried to lift his full toss from outside the off-stump but succeeded only in spooning a catch to mid-on. He batted for 113 balls and hit six fours.

India claimed the second new ball as soon as it was due and strangely asked Sehwag to bowl the first over with it. It clearly was aimed to rile Bravo who had fallen victim to Sehwag in both innings of the Antigua Test.

Lara reached his century when he cut Irfan Pathan backward of point for a boundary, having batted for 272 balls and a stretch of 328 minutes.

The last time Lara crossed a half-century in the second innings of a Test was way back in January 2004 when he made 86 against South Africa in Johannesburg.

Lara's dismissal, however, was a bit unfortunate as he was ruled leg before wicket to Sehwag while the ball seemed to have struck him outside the off.

Bradshaw scored one run but lasted 40 balls. When he fell, only one over remained.

Denesh Ramdin, who faced 62 balls for his unbeaten 19, saw off the final over by Kumble without any drama.

Earlier, the West Indies survived a torrid first half hour of the day as they lost overnight batsman Daren Ganga (26) and Ramnaresh Sarwan (1) for the addition of two runs.

After losing the entire fourth day's play due to thunder showers, India were buoyed by the sight of clear skies and a dried up ground. Their spirit were further lifted when two wickets were claimed soon after play started.

Ganga was the first one to leave the middle when he shouldered arm to a Kumble delivery and was horrified to see the ball spin back and peg back his off-stump.

Sarwan, following his first-ball duck in the first innings, didn't survive long as an excellent delivery from Patel took the edge of his bat on way to wicketkeeper Mahendra Singh Dhoni.

Patel, sensing that Sarwan expected another one to jag back on him like in the first innings, bowled a straighter delivery and the batsman playing for the inswinger, could do no more than edge a catch.

The third Test starts in St. Kitts on June 22.