Language Of Whose Camp?

Yes, 'Urdu' means 'military camp' in Turkish, but by the eighteenth century, it merely meant 'the city of Delhi'. The fascinating story of how the language whose name(s) were Hindi/ Hindvi/ Goojri/ Rekhta/ Dakhani at various times and places came to 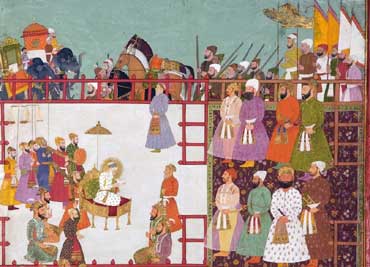 Metonyms can be misnomers and even lead to absurd interpretations, especially if the naming word comes from another language. A case in point is the name 'Urdu'. While it seems to be "common knowledge" that Urdu means 'military camp' in Turkish, it is not at all clear who promoted the simplistic notion that the Urdu language, by virtue of its name, had its origin in military camps.

Granted that the Turks who established their rule in northern India from the eleventh century onwards must have needed to communicate with the local populace through a mutually intelligible vernacular, but the most likely place for such a language of communication to emerge would be bazaars not army camps. In any case, there was no tradition of large standing armies that would be camped in cantonments such as those of the colonial era. Armies were cobbled together whenever needed and consisted mostly of peasants and mercenaries.

Yule and Burnell the authors of Hobson Jobson (A Glossary of Colloquial Anglo-Indian Words and Phrases, and of Kindred Terms, Etymological, Historical, Geographical and Discursive, Delhi, revised ed. 1986) cite a reference from 1560 in support of 'urdu bazaar' or camp-market. They also claim that the word urdu came to India with the Mughals (Babur, the first Mughal ruler was victorious at the famous battle of Panipat in 1526). While their citation must be correct, their claim that the Turkish word came with Babur is wrong because the Ilbari Turks had already put down roots in North India much earlier.

That Hindi/Hindvi/Dehlvi was a language that existed in the Delhi region is a fact that we learn from the contemporary histories as well records of sufi discourses. The Mughals did follow the Central Asian tradition of setting up vast encampments almost city-like in proportions that could be shikargahs (royal hunting camps) or simply a court away from the formal court at the Capital. But to infer that such camps led to new language formations is to stretch the idea of urdu=camp way too far. Certainly no new language grew out of Mughal camps in Northern India.

The grammar and the syntactical structure of Urdu are based on the local speech of the times in the region around Delhi (later identified as khari boli).

However, this language was not the chosen vehicle for literary production. Awadhi and Brajbhasha were the languages of poetry and other literary pursuits to the extent they were used for such a purpose in this early period.

For example, the earliest literary text in Awadhi dates from 1379 (the Chandayan of Maulana Da'ud). From the fragmented evidence that we have available to us from the literary sources of the period it seems that this speech was described as Hindvi/Hindi/ Dehlvi and the earliest literary work in it was a divaan by the 11th century poet Masud Saad Salman (1046-1121) who claimed to have divaans in three languages: Arabic, Persian and Hindvi. The Hindvi one though, is lost.

We learn about it from Muhammad Aufi's (composed around 1220-27) history of intellectual essences or the Lubab ul- albab (Pure Essences of the Intellect). Amir Khusrau (1253-1325) the versatile poet-genius also composed verses in Hindvi for the delectation of friends, but neither he nor they regarded those efforts serious or literary enough to be preserved or recorded in a formal collection or divaan.

Clearly Hindvi had not as yet developed enough literary potential.

Though marginalized by Persian, the language of the royal court on the one hand and Braj and Awadhi, at the regional courts and in the creative efforts of sant and sufi poets on the other, Hindvi lingered on as a lingua franca, traveling to western, central and southern India through the specific instances of official transfer of population such as the one enforced by Muhammad bin Tughluq (1325-1351), but more generally through merchants and traveling sufi mystics who were encouraged by their pirs to move to distant regions and establish their own centers.

The dynamics of the interflow between capital and region, the privilege of the north as the center of power, helped empower Hindvi and led to its development in areas distant from the place of its origin. It absorbed regional/local influences and morphed into Goojri in Gujarat and Dakhani in the Deccan.

Goojri and Dakhni flourished; their literary potential grew to encompass a wide variety of genres, subjects and attitudes. The earliest writings were philosophical-mystical poems with either indigenous or Persian metres. The lexical content was a mixture of Persian and indigenous vocabulary.

By the 17th century, 'Urdu' could boast of profoundly mystical poems such as Khub Muhammad Chishti's (d. 1638) Khub Tarang and also long love poems of the barahmasa type such as Muhammad Afzal's (d. 1625) Bikat Kahani. Around the same time, and more significantly, Urdu literature was flourishing in the Deccan, covering a wide range of subjects that ranged from the allegorical to the romance style in traditional ghazals, and included minor genres such as folk type poems like the chakkinamah that were popular among women and usually sung while performing household chores eponymous to the genre.

Literature in 'Urdu' thus developed earlier in the regions away from the capital. It was Vali Aurangabadi's (1665-1708) historic presentation of poetry in the Capital (Vali visited Delhi in 1700) that showed in no uncertain measure how complex, sophisticated, abstracted, metaphoric poetry was possible in a language other than Persian or Indo-Persian, a language that we can identify as early Urdu but which was known as Hindi/ Hindvi/Rekhta/Dakhani in those times. The poetics of this language was as indigenous as it was Persianate; probably inclined more towards the former than the latter:

Oh Vali, the tongue of the master poet
is the candle that lights up
the assembly of meanings.
(ay vali sahib-e sukhan ki zaban
bazm-e ma'ni mein sham-e roshan hai)

How did the language whose name(s) were Hindi/Hindvi/Goojri/Rekhta/Dakhani at various times and places come to be known as Urdu? The issue would not have been so vexed but for the role of politics in the Urdu-Hindi divide. The emotional and passionate discourse that is unleashed or vented in the name of historical research on the origins of Urdu and Hindi has obstructed rational debates on the subject. The nomenclature Urdu with its putative connotation 'military camp' muddies the lens of historiography, making it more speculative than it would have been without the name tag.

Two books on the subject that are relatively well known are: Amrit Rai, A House Divided: The Origin and Development of Hindi/Hindavi (New Delhi, Oxford University Press, 1984) and Christopher King, One Language, Two Scripts: The Hindi Movement in Nineteenth Century North India( New Delhi, OUP 1994). An important and recent intervention in the debate on the issues of origins and nomenclature is Shamsur Rahman Faruqi's Urdu ka Ibtidayi Zamana (Karachi 1999). Its expanded version is available in English: Early Urdu Literary Culture and History (New Delhi, OUP 2001). Among other thorny but noteworthy issues that his thesis tackles, the most conclusive research/arguments pertain to the earliest use of the metonym Urdu as name for the language and the 'meaning' or allusion of the word itself. The problematic question that still needs to be addressed is the nature, or to put it another way, the 'genetics' of this 'Hindi'. A language must have existed before the arrival of the Turks. It grew with the interaction and mixing of populations by the arrival of the Persian speaking Turks who began settling down in Northern India. It was natural for the new settlers to refer to this language as ‘Hindi’. Did the ‘Hindi’ that was the 'language of Urdu' (i.e. the 'language of the city of Delhi') in the late eighteenth century become the language known as Hindi today with Arabo-Persian vocables excised, and Sanskrit tadbhava added, as far as possible? How did modern Hindi and Urdu develop? I could present my viewpoint on these issues but I leave these questions for the reader to pursue. My purpose in this essay is to clarify a) the origin and meaning of the term ‘Urdu’ and b) to roughly outline the growth and development of a language from spoken to literary.