'I do worry about the type of pitches we are going to get after what happened in New Zealand during the summer,' says the skipper 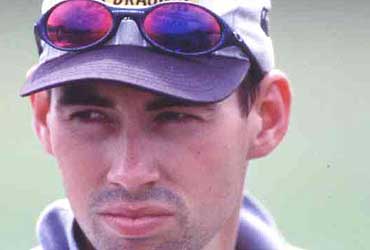 Having served extremely hostile tracks to India during the home series earlier this year, New Zealand captain Stephen Fleming is worried that the Indians might return the favour when he brings his side here hoping to register his team's first ever Test series win on Indian soil.

Fleming, one of the most successful Kiwi captains, is keen to reverse the trend of having never won a Test series in India when he arrives in October-November this year but is worried on account of the spinning tracks.

"I do worry about the type of pitches we are going to get after what happened in New Zealand during the summer," Fleming said.

During their New Zealand tour in December-January, the Indians played on pitches tailor-made for the home bowlers, which not only offered great pace but also enormous sideways movement. India suffered humiliating losses in both the Test as well as one-day series with their famed batting line-up unable to cope with the challenge.

Fleming realises that his team faces the prospect of a similar rout against the likes of Harbhajan Singh and Anil Kumble if the Indians opt for sharp turning tracks.

New Zealand have never won a Test series in India since they first came here in 1955-56 under Henry Cave. Indeed, they have lost on all but one of their seven trips to this country, something that Fleming is very keen to change.

He is keenly awaiting the outcome of the BCCI's fixtures committee meeting in Mumbai on Saturday to decide on the dates and venues of the two Tests, as also the one-day matches in a triangular series which follow. Bangalore and Mohali have emerged as the front-runners for the Test matches based on the Board's rotational policy for venues.

Not that Fleming is not confident of his team's abilities against spin. In fact, he is drawing a lot of hope from the way his batsmen tackled Muttiah Muralitharan in Sri Lanka recently.

"We will benefit from the experience in Sri Lanka. There is little doubt about that. But India is a different kettle of fish and we need to prepare well," Fleming was quoted as saying by the New Zealand Press Association.

Aware that the Indians would be gunning to extract revenge, Fleming stressed that his side must utilise the next three months on preparing for this important series.

"It is important for us to get better, and to consciously work hard at getting better," he said.

"Three months is a long time and presents us with a chance to improve our skills and work hard at doing the right things."

Their pace spearhead, Shane Bond, is recovering from a back injury and does not figure prominently in the preparation even though he is likely to be fit in time for the tour of India.

Bond is one bowler who can make his presence felt even on unresponsive pitches but Fleming realises that his back-up must come in the form of spinners. It would certainly bring into focus the two slow bowlers in the New Zealand ranks -- left-arm spinner Daniel Vettori and off-spinner Paul Wiseman.

Apart from the prospect of winning a Test series in India, Fleming is also motivated by another factor -- the fact that it was India who had sent them packing from the World Cup in South Africa earlier this year with a six-wicket defeat in the Super Six stage.

"We were outplayed by India on that day," Fleming said. "The two left-armers (Zaheer Khan and Ashish Nehra) were a handful lot."

New Zealand have had a satisfying tour of Sri Lanka after that, having drawn the Test series and won the triangular series, also involving Pakistan, which was only the second time that the Kiwis won a competition of three or more teams.

Fleming himself has been at the helm of this success, hitting a magnificent 278 in the first Test before leading his side to victory against Pakistan in the tri-series final with an attractive 65.

Now he has turned his attention to one of his most cherished dreams -- leading his side to a Test series victory in India. He had failed in his previous attempt -- when his side lost the series 1-0 despite having bowled out the hosts for 81 in the first Test in Mohali -- and now he is his hoping to make amends for that.

'I Am Looking Forward To It'