King Of The Planet

Every one of us, the citizens of the world who cannot vote in this election, has at least the right to say which of the candidates he or she would prefer in the White House. There is no other person on earth whose decisions have such an impact on our 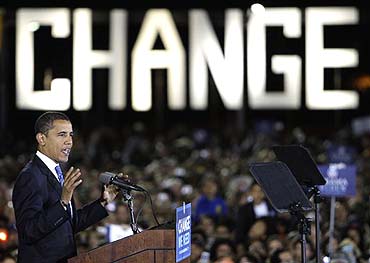 THE PRESIDENT of the United States is the king of this planet. I live on this planet. Therefore, the election of the President concerns me, too. Very much so.

The President is not the sole ruler of the world. There are other rulers too, albeit less powerful ones. His decisions are subject to many constraints beyond his control. But there is no other person on earth whose decisions have such an impact on our lives.

The eight years of George W. Bush can serve as an example. The primitive character of the man, his low intellectual level, his past as a born-again zealot - all these have influenced the state of the world, from his failure in preventing 9/11, through his bloody adventures in Afghanistan and Iraq, to the collapse of the world economy.

But still, every one of us, the citizens of the world who cannot vote in this election, has at least the right to say which of the candidates he or she would prefer in the White House.

ELECTIONS ARE not beauty contests. A wise voter must define the criteria according to which he intends to make his choice.

For me, the main attribute, overshadowing all others, is the ability to quickly recognize major changes when they occur and draw the necessary conclusions without delay.

In the words of the ancient Greek philosopher, "everything flows" - we know that the world does not stand still for a moment. In our time, with the rapid pace of modern life, the changes are quicker and more dramatic then they were 200 years ago. The development of technology, the spread of the internet, globalization, climate change, the instability of the economy, the currents of human migration, shifts in the world-wide balance of power - these and a thousand other factors ensure that changes will become more and more frequent and more and more radical.

The ability to adapt quickly to new situations is a decisive requirement for a leader. After dealing successfully with the world economic crisis, Franklin Delano Roosevelt reacted rapidly to Pearl Harbor. Winston Churchill recognized before others the danger inherent in Hitler's ascent to power in Germany. The young and inexperienced John Kennedy dealt decisively with the Cuban missile crisis, which had brought the world to the brink of World War III. Mikhail Gorbachev oversaw the sudden collapse of the Soviet Bloc and avoided world-wide bloodshed. The next American President will be faced right away with an economic crisis that is changing the face of the world.

The President resembles the helmsman of a sailing-boat who has to be ready at every moment for a sudden change of the wind and even for a hurricane.

Which of the two - Barack Obama or John McCain - is better suited for that job? The elderly Republican, who sees himself as the successor of a long row of Admirals and whose spiritual world is stuck in the middle of the 20th century, or the (comparatively) young Democrat, a man of the 21st?


THE SECOND test, in my eyes, concerns the character of the candidates. A person can change his opinions, but hardly his character. A solid - but not exaggerated - self-confidence, self-discipline, cool-headedness in a crisis - these will have a large influence on his ability to carry out his duties.

We have seen the two in the great debates. One should not pay too much attention to what was said there - everything said in an election campaign is merely a tool to catch votes. But we saw how the two candidates function under extreme stress. Obama controlled himself admirably. His self-discipline did not falter for a moment. He did not respond to provocations and he kept his cool at all times. McCain was much less in control of himself.

The most important decision the two had to make in the course of the campaign was the choice of a running mate. Since the Vice-President can assume power at a moment's notice - and there is indeed a significant probability that this may happen - the decision tells us much about the decision maker.

Obama's decision was responsible and reasonable. He did not choose a brilliant or charismatic person, but someone who is versed in the affairs of state and could assume office without a problem.

McCain's decision was a scandal that cries to high heaven. It suffices by itself to disqualify him from high office - not because of Sarah Palin's opinions or her character, but because she is totally incapable of filling the role of President.

The choice testifies to a basic flaw in McCain's character. He chose her because of the needs of the moment - to revive a flagging campaign and surprise the media, while appealing to the most primitive strata of American society. He jeopardized the future of the country for momentary expediency.

A person who is capable of making such a mistake should not be in a position to lead the most powerful country and to command the strongest military force on earth.

Moreover, the voter must ask himself or herself: if the President suffers a stroke, like Ariel Sharon, or is assassinated, like John F. Kennedy - would I prefer to see Biden or Palin in the Oval Office?

As for myself, I shrink back from the very idea of this primitive and venomous demagogue, Sarah Palin, becoming the "Leader of the Free World".


A THIRD test is the ability to choose aides. This, too, is an important attribute.

A strong leader, confident of himself, chooses highly qualified assistants, people who are prepared to advance independent opinions and contradict the boss to his face. A leader lacking self-confidence surrounds himself with flatterers and yes-men, who tell him only what he wants to hear. John Kennedy surrounded himself with the best and the brightest. George W. belongs to the second category.

I judge Israeli leaders by this measure. Yigal Allon, a much admired general and politician, surrounded himself with bright young men, who did not hesitate to interrupt him in mid-speech and contradict him. Menachem Begin was surrounded by people who agreed with his every word.

A strong leader invites disagreement, debate, brainstorming. A leader who only acts strong does not brook any opposition. (Like the ultimate dictator, Adolf Hitler, who broke out in fits of rage if anyone dared to contradict him.)

Politics is a profession by itself. Most politicians have no profound knowledge of other matters, certainly not in the areas in which they have to make fateful decisions - from economics to military strategy. So the choice of the right advisors and the readiness to listen with an open mind, to learn and to think anew are essential qualities. I have the impression that Obama can do it. I am not so sure about McCain.


THERE IS another important consideration to take into account while making the choice: in a week and a half not only will a president be chosen, but also a very large group of senior officials in all areas of government.

In the American system, the new occupant of the White House brings with him thousands of other office-holders, whose equivalents in other countries belong to the permanent civil service. It is easy to imagine the huge difference between those Obama would bring with him and those who would come with McCain.

One should not forget the Supreme Court, which plays a central part in the American system (as it does now in Israel). It is the President who chooses new justices. The appointment of one or two can bring about far-reaching changes.


WHEN ONE speaks about the election of a President of the United States, it is also very important to consider the candidate's openness to the wide world.

The United States is not just a country, it's half a continent. Many of its citizens don't give a damn about the world outside and don't want to hear about it. School children are unable to place China or Brazil on the map. Like previous empires, the USA sees itself as an island of civilization in a sea of barbarians. (Just like Ehud Barak, with his Israel as a "villa in the middle of the jungle".)

George Bush came to the White House with minimal knowledge about the world. John McCain does not know much more. True, he was born in the American military ghetto in Panama and languished for five years in a Vietnamese prison, but that does not make him a citizen of the world.

In this respect, Obama has an advantage unmatched by any previous president. He is the son of a black father who came from Kenya and a white American mother. In his childhood he attended a school in Indonesia. His manifold roots and experience give him much wider horizons. For a new arrival at the White House, that is an important treasure. There are things one cannot learn from others. Personal experience counts.


I MUST add a subjective remark. I belong to a generation that grew up admiring America. We saw the US as the freeest country in the world, an idealistic society, the bastion of democracy and human rights. In two world wars it rushed to the rescue of the opponents of tyranny.

When we had grown up, we found out that it ain't necessarily so. We saw that the US is like most other states, and worse than some. During the last eight years, the US has presented itself to the world as an arrogant, bullying, primitive and aggressive country that rides roughshod over the human rights of its own and foreign citizens, justifies torture, keeps abominable concentration camps, and the list goes on.

The election of Barack Obama, a man who is half black and half white and whose convictions are liberal and democratic, can give us back some of our faith in the United States. It would show that, as has happened several times in the past, America can draw back from the brink in time and find itself again, as it did at the end of the Joe McCarthy era.

I do not entertain many illusions. I know that even in the best of circumstances, one single person cannot turn such a huge ship around and reverse its direction completely. But even small changes can be of immense importance to the world.

Perhaps, some day, I shall regret every word I have written here. Obama may prove to be a disappointment, and very much so. We cannot know the future. Today we can judge only on the basis of what we know today, according to our impressions and feelings today.

And these tell me: Obama.