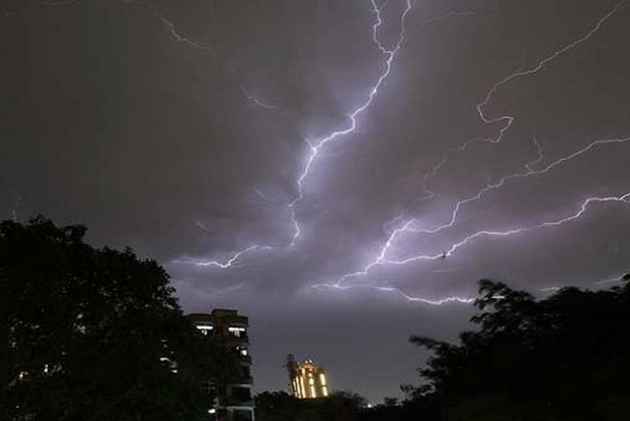 At least 13 people were killed in rain-related incidents in Kerala in the last two days as torrential monsoon rains lashed several parts of the state.

Officials in the state Control Room for disaster management said that four people died on Sunday -- two in Thiruvananthapuram and one each in Pathanamthitta and Alappuzha districts.

As the Met department warned of strong winds along and off Kerala coast and over Lakshadweep islands in the next 24 hours and asked fishermen not to venture into sea, Chief Minister Pinarayi Vijayan asked officials to be alert and take utmost care.

"People living in hilly taluks need to be extra careful. Government has taken necessary precautions to meet any exigency. Control rooms have been opened across the state," he tweeted.

In the state capital, a man was electrocuted to death when he came in contact with a power line that snapped in gusty winds at nearby Neyyatinkara, while another died in a tree fall.

According to revenue authorities, nine people died in rain-related incidents in Kozhikode, Kannur and Kasargod in the last two days.

Most of the deaths occurred due to drowning in swollen rivers and falling of uprooted trees, they said.

As the South-West monsoon remains active, most parts of the state have been receiving rains in the past few days.

The rains have damaged crops and property in Idukki, Kozhikode, and Kannur districts, officials said, adding the loss to agriculture and property was being assessed.

Traffic was disrupted in the high range Idukki district following landslips and after trees fell on roads, they said.

Sea erosion was also reported from some coastal areas where affected fishermen families had been shifted to relief camps.

The Met department said strong winds with a speed of 40-50 kmph, gusting to 60 kmph, are likely along and off Kerala coasts and over Lakshadweep areas in the next 24 hours.

Fishermen were asked not to venture into the Arabian Sea as it would be rough to very rough during the period.

Meanwhile, the state government's 52-day ban on trawling by mechanised fishing boats during the monsoon came into force from today.

This year the ban period has been extended by five more days and would be in force till July 31.

The two-decade old practice of banning trawling during this period is implemented with a view to protecting sea resources as the gestation period of different species of fish occurs during the monsoon.

Trawlers from other states also would be asked not to enter the state coast during the ban period, officials said.

Meanwhile, Leader of the Opposition in state assembly Ramesh Chennithala asked the government to issue directions to district collectors to take up relief works in rain-hit areas.

Damage to property and crops was more in hill districts, he said, pointing out land slips had occurred in several places.