A peek at the lives of people on Delhi’s streets, viewpoints on how administrative laxity leads to non-percolation of art into India’s smaller cities and towns, a dash of Urdu poetry, a take on the country’s only river-island along its northeast, a lost civilisation down south by the Arabian Sea...

Such ideas, discrete and incongruous, find assortment in Telangana’s biggest contemporary cultural festival that is on in the state capital, courtesy a rare convergence of arts of varied hues. The ongoing ‘Krishnakriti Art and Cultural Festival’, which is into its 14th edition now, typically blends elements of literature, visual arts, music, dance, theatre and cinema. 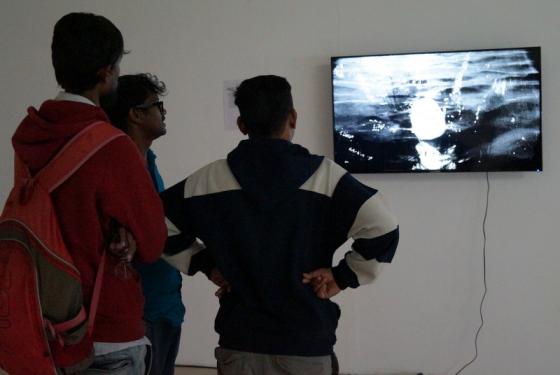 The festival is being organised by Telangana Tourism in cooperation primarily with the Krishnakriti Foundation this time around. The event began with the screening of a movie that showed the travails of those surviving in open spaces of the national capital. The 74-minute feature-length documentary by young director Shaunak Sen has the camera trailing behind quite a few battling it out in the open in Delhi’s extreme climate with no proper roof above head—be it peak winter, the brief monsoon rains or the prolonged summer.

“It takes you to one of those hard realities a section of the people face on a daily basis,” says Selvaggia Velo, while introducing the audience to the 2016-made ‘Cities of Sleep’, which she screened in her native Italy in December as the director of River to River Florence Indian Film Festival—and annual event that began in 2001.

At a panel discussion that followed at the same venue—Chitramayee State Art Gallery, sculptor Aastha Chauhan and painter Diwan Manna spoke of an array of problems facing the art world in contemporary India. The hour-long session on ‘Galleries, Biennales and Alternative Spaces in India’, moderated by researcher-scholar Dritabrata Bhattacharjya Tato, stressed the need to end certain norms existing with bodies governing art in the country.

“Most art colleges continue to cling on to the syllabus largely set by the British during their rule,” rued Chauhan, who works with community culture organisation KHOJ in Delhi. “Another matter, it is in the dearth of resources, often, that a burst in art happens.” 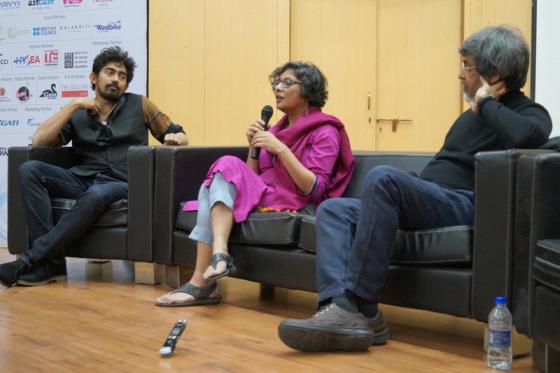 Middle-aged Manna, also a pioneer of conceptual photography in India and creating work that blends visual, body arts and acting, lamented that top bureaucrats generally cling on to posts for love power than culture. “We have Lalit Kala Akademis with just Rs 5 lakh granted as an annual budget,” he shrugged. “Yet when a Prime Minister or a CM visits a (heritage) village, they make the same organization the route to spend Rs 2 crore for just a day!”

At another block of the gallery up a small cluster of rocky hills in Madhapur, Faizal Khan seeks to explore how tools of technology define the world of art today. As the curator of a section called ‘Exploratory’ that features works by six artists, he says the new movement plays on memories, aesthetics and relations between societies and nature. “A constant shifting of the plates lying between choice and change makes the world a better or world place to live,” notes Khan, also a roving journalist. “How do we handle the choice and change?”

A video by young Shilpika Bordoloi has the movement artist performing at the river-island of Majuli in her native Assam. The four-minute work seeks to plum deeper into “magic, mysticism and mystery of Majuli women woven around memories and impressions of the mind’s eye”, says the conceiver of ‘Nature of Nescience’.

Next to it is another small screen where an Urdu poem in a two-minute loop, also in black-and-white, pops up visuals of farmers in the north Indian plains growing cotton and weavers from Varanasi weavers bringing out fabric from yarn. “But they never get their due in terms of wages. For, they are the smallest cogs of the textile wheel,” notes the work’s artist, Nirupama Singh Dar. “The attempt is to give voice to these teeming powerless in India.” 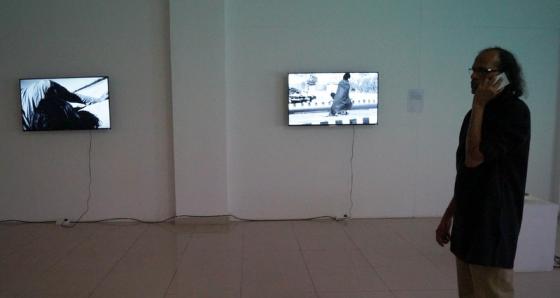 Spaniard and a UK-resident, Jasone Miranda Bilbao’s three-video installation takes a close view of three plants growing over a period of four hours. “The results speak of a particular attitude of quiet and uncompromising persistence operating from within its own carefully chosen parameters,” she notes.

‘Black Gold’ by veteran Vivan Sundaram is a large installation comprising tens of thousands of ‘discarded’ pot-shards, forming an imaginary two-millennium-old seaport city—in Muziris of present-day central Kerala. “Often in the historical takes, there is a tragic end: the flood (which swept away the thriving business locale and civilisation in 1343),” points out 73-year- old Sundaram, whose aunt is yesteryear modern artist Amrit Sher-Gil.

The section also has a segment screening four virtual-reality movies.